Last week, we noted excerpts were coming out from Ramin Setoodeh's gossipy tell-all book on the seamy underside at The View. Now Yashar Ali at HuffPost has secured a copy of the entire book. Their headline is "New Book Reveals Stunning Misconduct And Dysfunction At ABC’s The View." 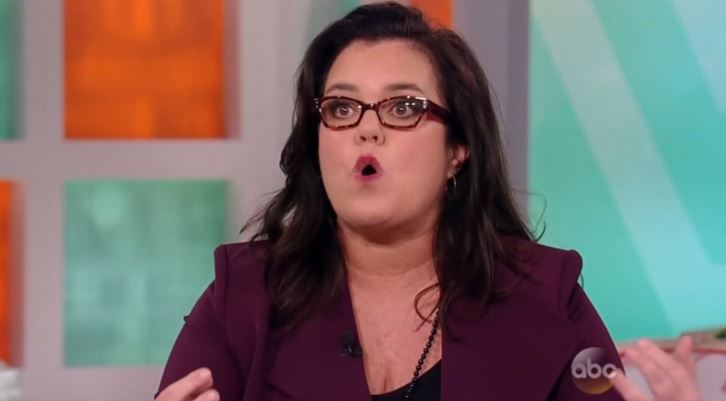 The most quotable section was about Rosie O'Donnell's battles with producer Rick Gentile, which grew so bitter that Gentile would leave the studio whenever Rosie entered. Gentile had a child out of wedlock with one of the show's other producers.

“Not like Bill O’Reilly, he’s crazy. She’s medically insane, the best talent she has is making you believe she’s normal. She was like Pol Pot in Cambodia. She was going to go through the country and she was going to kill everybody and have it her way,” Gentile said.

This sounds like O'Donnell is getting the Donald Trump treatment....she's a mentally unfit tyrant. Except the networks aren't running around repeating these stories like they do with gossipy anti-Trump books.

Ali helpfully explained that characterization was just a little too angry: "Pol Pot led the Khmer Rouge and oversaw the Cambodian genocide, which resulted in almost 2 million Cambodian deaths."

According to the book, Anne Sweeney, then the president of the Disney-ABC Television group, brought O’Donnell back to The View for a second run, despite it being clear she had been repeatedly accused of abusive behavior toward fellow co-hosts and staff. O'Donnell and then-Republican Nicolle Wallace had an "acrimonious" relationship when the cameras weren't on.

The book describes how O’Donnell was upset that Wallace defended former President George W. Bush on MSNBC’s Morning Joe, and O’Donnell blew up at Wallace backstage. Later, O’Donnell became enraged in another meeting, which led Wallace to report her to human resources.

O’Donnell told Setoodeh she was shocked that Wallace would report her to human resources “Are you kidding me? I raised my voice. I was in my dressing room, getting my makeup done, and somebody comes and goes, ’Nicolle Wallace just went to HR…” O’Donnell said.

O’Donnell added a telling detail that speaks to the lack of oversight at the show: “I didn’t know what HR was, first of all.”

O’Donnell also described Wallace bringing her husband to work that day to serve as a bodyguard of sorts. According to O’Donnell, Wallace told her, “I just felt you were threatening me.”

Ali reported a theme emerges throughout the book: "The power [Barbara] Walters held over the show (and the fact that the filming studio and offices were located in a different building in New York City than ABC’s headquarters) allowed workplace misconduct and dysfunction to thrive at the program...The book details more than 100 examples of a hostile work environment, yet it seems nothing was ever done to mitigate this behavior. Clashes backstage between staff and co-hosts, and between co-hosts and co-hosts, are detailed at great length."

Ali also tells a story of how O'Donnell mysteriously sent Walters an advance copy of her book Celebrity Detox, even though the two weren't on speaking terms. "The book portrayed Walters as narcissistic boss who, among many issues, became annoyed when fans in the show’s live audience would praise O’Donnell.'

Walters responded by leaking the book to the New York Post with the proviso that O'Donnell be portrayed as a villain and evaluated negatively by a psychiatrist.

The Post wrote: "Ranting Rosie O’Donnell is full of rage, has a profound distrust of men, craves public adoration, shows signs of post-traumatic stress disorder and dishes out her anger mostly to women because of deep-seated abandonment issues over her mother’s death, said a psychiatrist after reading her latest memoir."