Washington Post "fact checker" (and former State Department reporter) Glenn Kessler tweeted it was "an embarrassment and an outrage." The Trump administration rescinded a "Women of Courage" award at the State Department for Finnish journalist Jessikka Aro, and two reporters at Foreign Policy magazine found the usual Anonymous Source claiming it was because someone on Team Trump read her Twitter feed and had second thoughts. 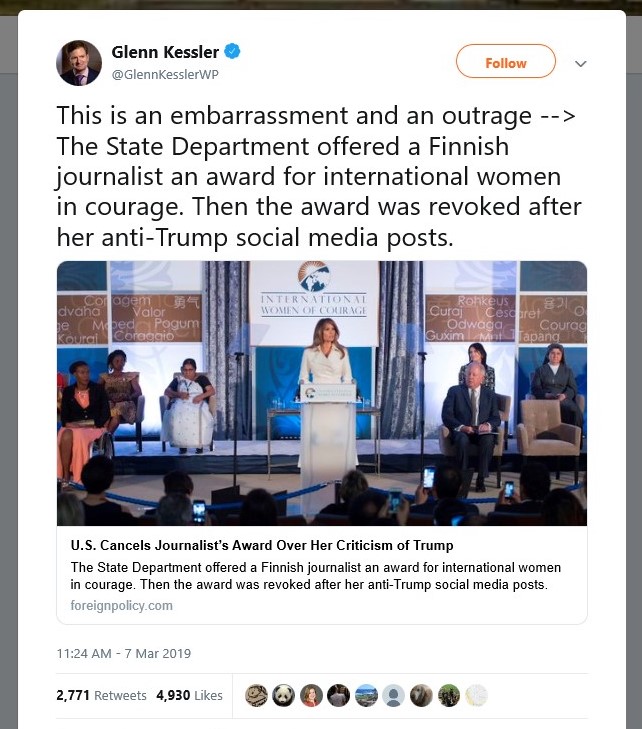 A State Department spokesperson said it was due to a “regrettable error,” but Aro and U.S. officials familiar with the internal deliberations tell a different story. They say the department revoked her award after U.S. officials went through Aro’s social media posts and found she had also frequently criticized President Donald Trump.

“It created a shitstorm of getting her unceremoniously kicked off the list,” said one U.S. diplomatic source familiar with the internal deliberations. “I think it was absolutely the wrong decision on so many levels,” the source said. The decision “had nothing to do with her work.”

The State Department spokesperson said in an email that Aro was “incorrectly notified” that she had been chosen for the award and that it was a mistake that resulted from “a lack of coordination in communications with candidates and our embassies.”

Unaddressed in this liberals-upset-for-other-liberals story: Why would you want an award from the Trump administration if you hate them so much? If you #Resist them in your Twitter feed, why not take this denial as proof of your successful #Resistance? It doesn't really take courage in today's media to oppose Trump. It seems like a pre-requisite.

The Foreign Policy duo of Reid Standish and Robbie Gramer could not prove this anonymously-sourced "outrage" was caused by President Trump or Secretary of State Mike Pompeo, but that doesn't mean they can't complain about a censorious atmosphere of Trump-fearing bureaucrats: .

There is no indication that the decision to revoke the award came from the secretary of state or the White House. Officials who spoke to FP have suggested the decision came from lower-level State Department officials wary of the optics of Pompeo granting an award to an outspoken critic of the Trump administration. The department spokesperson did not respond to questions on who made the decision or why.

To U.S. officials who spoke to FP, the incident underscores how skittish some officials—career and political alike—have become over government dealings with vocal critics of a notoriously thin-skinned president.

“I use Twitter to exchange ideas and share information freely,” Aro said. “I find the idea of U.S. government officials stalking my Twitter and politicizing my perfectly normal expressions of opinion deeply disturbing.”

This could be another motto for The Washington Post: "Vocal Critics of a Notoriously Thin-Skinned President." It's less obnoxious than that Democracy Dies drama-queen routine.

Guess who else sounds "notoriously thin-skinned"? Aro tweeted that somehow the rescinded award violates her freedom of speech! 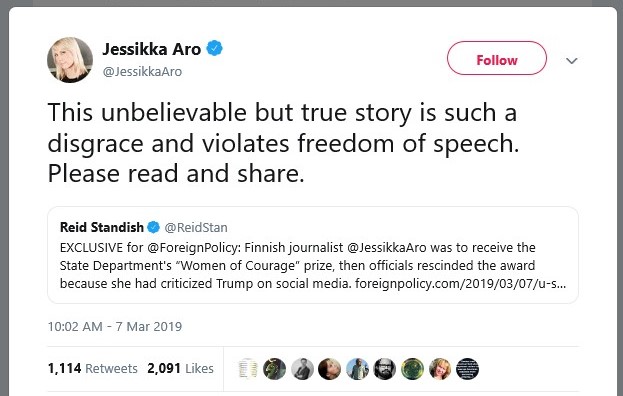 When it comes to being harassed online, Aro has a different approach to free speech when the trolls go after her.