PolitiFact doesn't always apply neutral headlines in its "fact checks," as in this whopper from Monday: 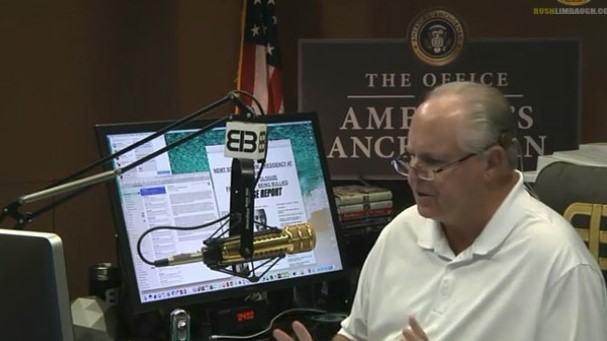 Conservative pundit Rush Limbaugh dismissed climate change as the work of agenda-driven computer models spitting out threats that loom just beyond the horizon, where scientists can elude accountability for their dubious predictions.

"Climate change is nothing but a bunch of computer models that attempt to tell us what's going to happen in 50 years or 30," Limbaugh said on Fox News Sunday. "Notice the predictions are never for next year or the next ten years. They're always for way, way, way, way out there, when none of us are going to be around or alive to know whether or not they were true."

We should be surprised Kruzel didn't flag Limbaugh for joking "I'm trying to be one of the first to book a first-class seat on a train to Hawaii after we enact the Green New Deal or whatever it is from Alexandria Ocasio-Cortez."

Limbaugh's quoted remarks were preceded by talk about how millennials are mis-educated. "I know young people, Chris, who really think that by the time they're 65, the country, the world is not going to be habitable because of climate change, which is another hoax! There's no evidence for it."

This is where PolitiFact cries foul.

"Utter nonsense," is how climate scientist Kevin Trenberth characterized Limbaugh’s claim."We can simply look at the actual climate record," said Trenberth, a senior scientist at the National Center for Atmospheric Research. "The Earth is now hotter than it has ever been."

That's not technically true, since the record of measuring global temperatures goes back to 1880.  But this is where conservatives cry foul right back. Kruzel insisted "climate change predictions from decades past have largely been borne out." Kruzel cherry-picks a climate forecaster who predicted in 1975 that temperatures would rise 0.74 degrees by 2010, and it rose by 0.62 degrees.

Earth to PolitiFact: this is NOT the kind of disastrous warming that moves the political needle, and it's not really what Limbaugh was talking about. He's talking about using climate panic to push dramatic government intervention like the "Green New Deal."

As we just pointed out at the latest Harrison Ford freakout, networks like NBC and PBS were running around 30 years ago saying we'd face "enormous calamities in a very short time." That didn't turn out to be true. PolitiFact wouldn't dare look at climate panic from 30 years ago.

It's important to note that PolitiFact's "Truth-o-Meter" ratings on Limbaugh suggest an emotional investment in dragging down America's most popular radio host as a fact-mangler.  Check out the hard tilt.