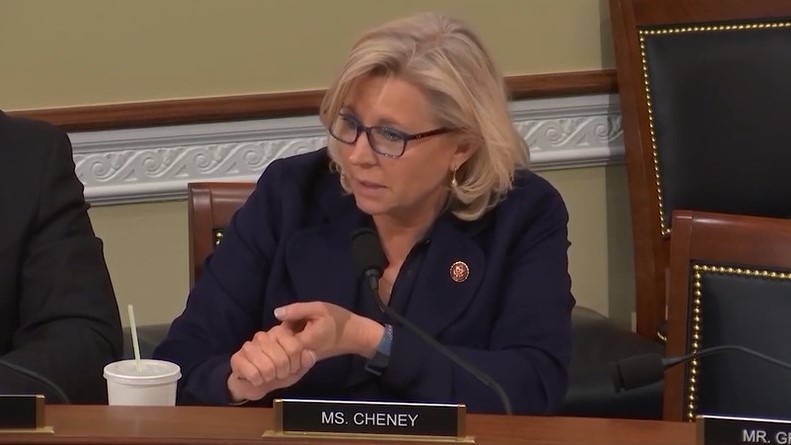 This is why people criticize self-appointed Guardians of Fact. First, they imply that speculating about the future your opponents are proposing -- in this case, abandoning fossil fuels before there's an obvious feasible alternative -- is somehow lying.

We might joke that by this standard, the Trump-bashing slogan "Democracy dies in darkness" earns Four Pinocchios. Did Trump propose the death of democracy?

And second, fact-checkers generally can't help but clumsily apply a liberal bias in deciding who gets "Pinocchios" and who is "Pants on Fire." On the same Green New Deal documents, the Post's fact police gave Cheney a ticket and gave Alexandria Ocasio-Cortez a Get Out of Fact Jail Free card. In that case, just three days before flagging Cheney, Rizzo proclaimed "we won't be awarding any Pinocchios in this kerfuffle" -- even as he admitted Ocasio-Cortez misled the public.

Here's a video of Liz Cheney asking witnesses how precisely we should ban air travel in the next ten years:

Here's the Cheney passage that offended Rizzo, at the video's end:

“I would just say that it’s going to be crucially important for us to recognize and understand when we outlaw plane travel, we outlaw gasoline, we outlaw cars, I think actually probably the entire U.S. military, because of the Green New Deal, that we are able to explain to our constituents and to people all across this country what that really means. And even when it comes down to something like air travel, which the FAQs say they want to eliminate within the next 10 years, that means the government is going to be telling people where they can fly to and where they can’t. And I would assume, I guess, that means our colleagues from California are going to be riding their bicycles back home to their constituents.”

This is how Rizzo issued his judgment, which underlines that she was "conjuring" or speculating or spinning, and then plays games with how this is a "lie" because the "resolution has no teeth." Think of many thinks Donald Trump has said -- especially about the press -- that have no teeth.

Cheney conjured up an apocalyptic vision of life under the Green New Deal: Outlawed cars, outlawed gasoline, outlawed plane travel and even possibly no military and a roster of “vacation commissars.” Even allowing for political rhetoric, there’s very little to support these claims.

In reality, the Green New Deal resolution has no teeth and wouldn’t become law if it passed. So these claims are based on a retracted FAQ about a nonbinding resolution. In these documents, proponents of the Green New Deal mused about ending air travel and stopping cows from passing gas. Problematic as those lines were, none made it into the resolution.

Moreover, the FAQ was discarded days before Cheney brought it up at a House hearing to raise the specter of some government bureaucrat deciding whether you can board a flight. There’s nothing like this at all in the plan, not in the resolution and not in the retracted FAQs.

Cheney goes further than many of her Republican peers and earns Three Pinocchios. We were tempted to make it Four Pinocchios, given Cheney’s line about “vacation commissars,” but the ineptitude of the Ocasio-Cortez staff certainly gave Republicans a lot of material for these attacks.

In other words, it's only fair to blame Ocasio-Cortez for a minus-one Pinocchio, since they couldn't give her any of her own on this subject.