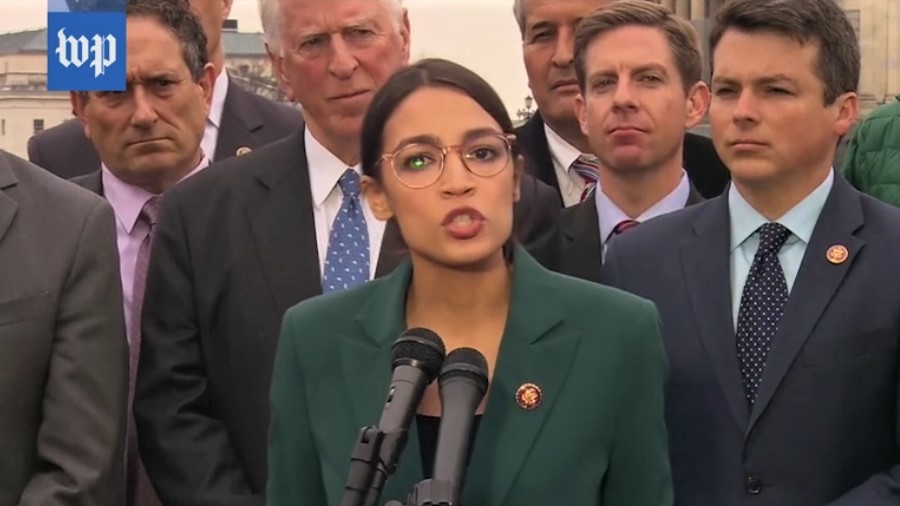 The Washington Post Fact Checker page has a habit of “hiding the Pinocchios” for Democrats when liberal staffers aggressively engage them. This happened again early Monday with the much-mocked Alexandria Ocasio-Cortez talking points for the “Green New Deal.” Post “fact checker” Salvador Rizzo admitted the new congresswoman and her supporters misled the public, but they were “walked back,” so no Pinocchios. Rizzo concluded the only document that mattered was the actual House resolution submitted:

There’s a case to be made that the criticism about ending airplanes and cows was a stretch to begin with, since the resolution didn’t mention any of that and the FAQs were not definitive on those points. But Ocasio-Cortez has now disowned the FAQs and the statements that went beyond the resolution. The line about providing for people “unwilling to work” has been walked back completely. So we won’t be awarding any Pinocchios in this kerfuffle.

Rizzo began by "correcting" both a Trump tweet and the Ocasio-Cortez press team:

No one is proposing to “eliminate all planes, cars, cows, oil, gas and the military."

No one created “doctored” versions of the Green New Deal that included these outlandish proposals.

Rizzo noted that an Ocasio-Cortez "Frequently Asked Questions" document called for building “high-speed rail at a scale where air travel stops becoming necessary,” and also "We set a goal to get to net-zero, rather than zero emissions, in 10 years because we aren’t sure that we’ll be able to fully get rid of farting cows and airplanes that fast."

Earth to Fact Checkers: Doesn't "get rid of farting cows and airplanes" sound like a proposal to "eliminate" them?

Rizzo reported how Team AOC started spinning the notion they were being ironic, which no one should take seriously:

On Saturday, however, Ocasio-Cortez walked back all the statements in the FAQs.

“Point is, the real one is our submitted resolution, H.Res. 109,” she tweeted. Ocasio-Cortez also said: “There are multiple doctored GND resolutions and FAQs floating around. There was also a draft version that got uploaded + taken down. There’s also draft versions floating out there.”

The statements and FAQs at issue were not doctored. They were all produced by her staff. Now, Ocasio-Cortez is saying they were “draft” versions not ready for prime time.

“The only document our office is officially standing by is the actual resolution that we published,” Saikat Chakrabarti, Ocasio-Cortez’s chief of staff, told The Fact Checker on Saturday.

Can one imagine Rizzo and Glenn Kessler saying that only Trump's legislative language mattered, and not what he said on Twitter? No.

Rizzo's piece carried the soft headline "What’s actually in the ‘Green New Deal’ from Democrats?" It wasn't "Ocasio-Cortez lies about 'doctored' documents." But their recent Trump pieces have headlines like "President Trump’s fantastical human-trafficking claims" and "President Trump’s Texas-size whoppers." Someone might detect a bias....