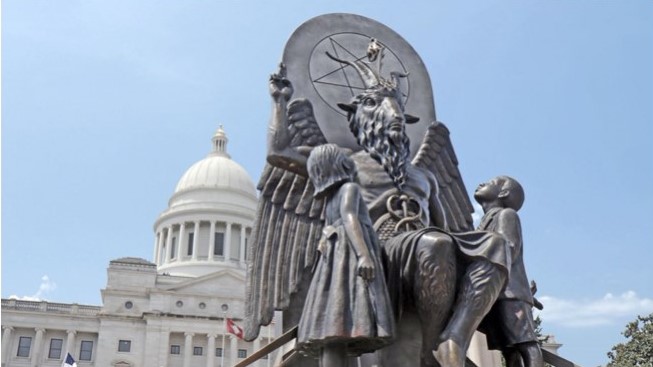 These people aren't greeted as worshippers of the Devil, but as atheist pranksters sticking it to the Jesus freaks. Felperin praised it as "Wickedly funny, fascinating and niftily made, this crowd-pleaser will reign at festivals and prove, yet again, that the devil always has the best tunes."

The Temple, led by Lucien Greaves, loves driving the right-wingers nuts, like supporting a bill in Florida to permit prayer in schools, "permitting children to worship the Dark Lord with as much impunity as those worshipping Jesus or Allah." Felperin likes how it makes the religious dummies seethe:

This ironic literalism, a kind of rhetorical jujitsu designed to hoist deistic lawmakers and legislatures by their own petard, is one of the Satanic Temple’s most incisive satirical tools. It's a smart way — if arguably too subtle for many of its opponents to understand — to underscore why church and state must be kept separate.

They also like installing their statue of Baphomet, a goat-headed, angel-winged representation of Satanism (he sits under a pentagram and has two adoring children around him).

Predictably, pro-Satanist rallies have drawn zealous counter-protestors and it's a miracle no one's gotten killed yet, especially given how many locals in these states are just as enthusiastic about owning guns and protecting their precious Second Amendment as they are about the Bible and telling women what they can and can't do with their own bodies.

Indeed, the explication here of TST's essential seven tenets (such as, for instance, "the freedoms of others should be respected, including the freedom to offend," or "one should take care never to distort scientific facts to fit one's beliefs") suggests they're basically liberal humanists 2.0, but with more facial piercings, eyeliner and f-you attitude. Which basically makes them awesome, especially since unlike an earlier generation of Satanists, they are atheistic and interested in celebrating human beings in all their rich variety rather than creating some kind of looking-glass inversion of Christianity.

In other words, they're more like your average secular-leftist journalist. The film does include feuding between Greaves and another Satanist named Jex Blackmore, which "adds a little spice to a film that at times almost feels like a (highly persuasive) commercial for TST, one told with all the crisp editing and jocular deployment of clips from many other works permissible under the terms of fair-use copyright law (hello Rosemary's Baby and lots of vintage religious movies) you'd expect from a slick recruitment film."

She concluded with more winking: "Sign me up and send me two Baphomet t-shirts for the kids."