On Friday, AP media reporter David Bauder reported on PolitiFact founder Bill Adair, now at Duke University, preparing technology for "real-time TV fact checks" during the 2020 campaign: "The TV product would call on a database of research from Politifact, Factcheck.org and The Washington Post to point out false or misleading statements onscreen."

Washington Post "fact checker" Glenn Kessler tweeted Friday night that this was unassailably great that there is "no excuse" why the TV networks wouldn't put this on air in real time: 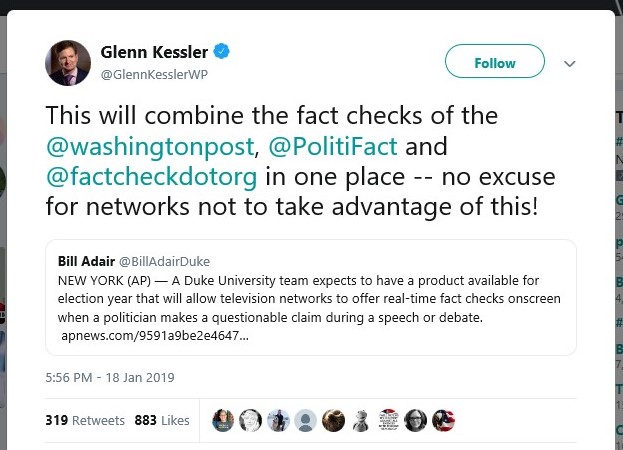 Kessler somehow can't see (or refuses to acknowledge) the Gorilla In The Room: their one-sided aggression toward Trump.

Let's just look at Team Kessler's January output for a flavor of what the TV networks would be foisting on the public. It's ten blog posts on Trump or the Trump administration, and two on Democrats, one each on liberal Senators Patrick Leahy and Elizabeth Warren. One looked at both parties. This is their Five to One month so far:

January 3: Does it matter that Trump has only spent 6 percent of the ‘wall’ money? This is actually the Patrick Leahy fact check, but notice his name is not in the headline -- just in the picture -- and the Three Pinocchios awarded to the Democrat are not pictured on the home page. Hmmm, why would conservatives worry about real-time Democrat-enabling from these folks?

January 8: President Trump’s nonsensical claim that Mexico is paying for the wall

January 8: Your fact-checking cheat sheet for Trump’s immigration address: Here's a guide to 20 suspect claims that the president may say tonight. [No cheat sheet for the Other Party.]

January 10: Trump’s claim that job growth is due to companies ‘moving back’

January 14: A guide to understanding the [Trump] administration’s spin on terrorists at the border

January 15: What really happened in the White House Situation Room? [probing both parties]

January 16: Can Trump claim credit for $26 billion in savings on prescription drugs?

This last one reads more like a DNC opposition research sheet than a "fact check."

AP's Bauder did call me for a critical take on the liberal bias of "fact checking" late in his story (criticism which Kessler ignores):

Even Tim Graham, director of media analysis at the conservative Media Research Center, concedes that “we all understand that President Trump has a casual approach to factivity.” [I said "facticity."]

But conservatives are deeply suspicious that Trump’s words are being watched more carefully than those of Democrats. They will notice and take offense if Trump is corrected on the air much more than his rivals, he said, no matter if Trump actually makes more false or misleading statements.