Activists to the left of The Washington Post -- and that's pretty off to the left -- distributed satirical copies of a Fake Post in the nation's capital on Wednesday. The actual Post public-relations account warned on Twitter "There are fake print editions of The Washington Post being distributed around downtown D.C., and we are aware of a website attempting to mimic The Post’s. They are not Post products, and we are looking into this."

In its graphics, it was a pretty successful act of mimicry, except we can't imagine the Post using the tabloidish headline "UNPRESIDENTED."  Underneath that, the subhead read: "Trump hastily departs White House, ending crisis." The top-left headline added "Celebrations break out worldwide as Trump era ends." They also changed the Post front-page motto from "Democracy Dies in Darkness" to "Democracy Awakens in Action." The fake paper was also dated May 1, 2019. 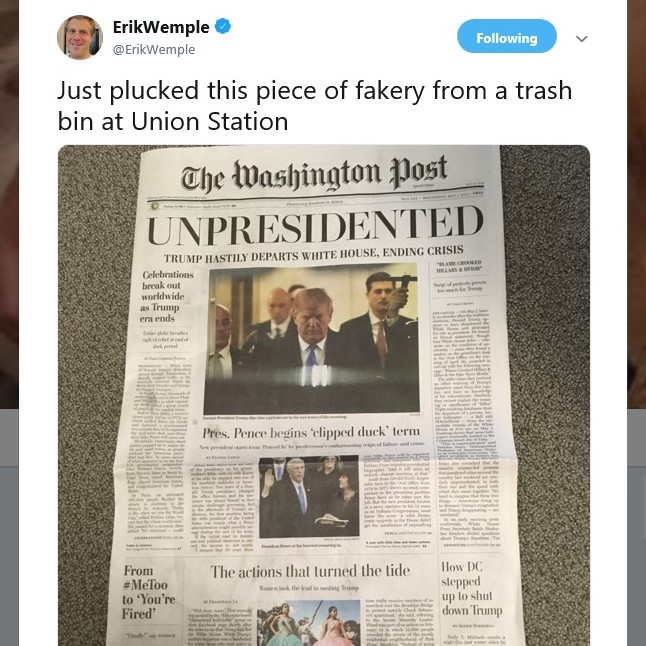 Over a  headline about leftists indulging a "resistance fantasy" of Trump's presidency ending abruptly, Wemple offered a little bit of self-deprecating fun at the parody:

The story reports that Trump “issued no formal statement, though four White House aides — who spoke on the condition of anonymity — claim they found a napkin on the president’s desk. . . .” Bolding added to highlight less-than-state-of-the-art mimicry!

Maybe try one of those in the next edition of Parody Washington Post.

“This newspaper is a fantasy,” says organizer L.A. Kauffman in a press release, “but it’s rooted in both reality and scholarship. Our stories build on real-world resistance to Trump and insights about how ordinary people can dislodge an unfit leader.” It was a “work of future fiction or speculative fiction. It is a vision of a future we’d like to see.” They don't like how the media failed to stop a President Trump. One fake headline is "Major news outlets on Trump's rise to power: 'Our bad.'"

Liberal tweeters were delighted and wished the fake news of Trump quitting was real. Conservative tweeters joked it was hard to tell the difference between this staunchly leftist fake-paper and the real newspaper.