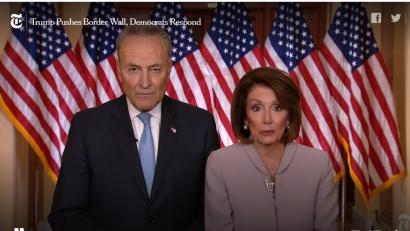 The New York Times joined the rest of the liberal media in leaping on Trump's immigration address as "fact checkers." On Wednesday, a Times collective singled out eight claims from Trump....and only one rather flaccid mention of the Democrat response. Overall, two of Trump's claims were judged "False," one was "Misleading," and five were categorized as "this needs context." The only Democrat claim evaluated was in the last category.

The Times began with a lame, politically charged False on Trump:

“The federal government remains shut down for one reason and one reason only: because Democrats will not fund border security.”

Democrats have offered $1.3 billion in funding for border security measures like enhanced surveillance and fortified fencing. They do not support Mr. Trump’s border wall.

Trump's sentence is a political statement blaming the Other Party, just like Pelosi's rhetoric at the beginning of her remarks that "The fact is, President Trump has chosen to hold hostage critical services for the health, safety, and well-being of the American people." It should be obvious to a fact-based journalist that both sides refuse to compromise on ending a shutdown. If Trump was "False," so was Pelosi.

But this claim was especially odd:

In November, the agency, which is actually named Customs and Border Protection (and which oversees the Border Patrol), apprehended 51,856 people trying to cross the border illegally. That’s about 1,700 per day.

The agency also deemed another 10,600 “inadmissible,” which refers to people who seek lawful entry into the United States but are barred from doing so. Together, that would be over 2,000, but “inadmissible” is not the same thing as illegal entry.

Then there was this "factual, but" complaint:

“In the last two years, ICE officers made 266,000 arrests of aliens with criminal records.”

In the 2017 and 2018 fiscal years, Immigration and Customs Enforcement arrested over 210,876 people with previous criminal convictions, and another 55,233 people with pending criminal charges.

But it should be noted that these criminal convictions covered a range of offenses, including many that were nonviolent.

Translation: Trump's numbers were correct, but we don't like them. They're not fact-checking. They're objecting to context.

Like PolitiFact, Qiu and the Times tried to defend Schumer from the attack that he voted previously for "barriers," when he did. They also claimed that Trump's fact "needed context" because he mocked the fences as inadequate during the campaign.

The worst tactic in "fact checking" is to take a politician's prediction about what will happen in the future and claim it's "false," like the fact checker has a time machine. A prediction can sound ridiculous -- "Linda Qiu will turn into a zebra" -- but liberal reporters use it for claims like "Bill Clinton will raise your taxes," as they did in 1992. The media psychics were wrong to call that False in advance.

“The wall will also be paid for, indirectly by the great new trade deal we have made with Mexico.”

First, the revised North American Free Trade Agreement, known as the United States-Mexico-Canada Agreement, has yet to pass in Congress. Any economic benefits from the agreement, if it passes, will most likely come in the form of lower tariffs for American companies or higher wages for American workers.

This is different from Mr. Trump’s campaign promise that Mexico would finance the wall.

Trump is claiming something that's definitely "indirect," that the wall will be "paid for" by tariffs or economic growth. But reporters can't let politicians boast like politicians -- unless they're Democrats. None of them said in advance that Obama's "you can keep your doctor" was False.

At the end was a limp notice of a Charles Schumer sentence, mildly objecting to the word "millions."

“No president should pound the table and demand he gets his way or else the government shuts down, hurting millions of Americans who are treated as leverage.”

An estimated 800,000 federal workers are furloughed or working without pay because of the shutdown. While millions of Americans are not being directly harmed, there is a multiplier effect when considering family members of those whose jobs are affected. This also spills into the broader economy, harming business owners whose customers must cut back, tourism and travel.

This reads like "Let's be careful, Chuck, even though you're right about the multiplier effect."

We have rated this New York Times "fact check" as Half-Baked. For similar analyses, please visit our Fact-Checking the Fact-Checkers site.