It's not hard to imagine federal workers are concerned about the length of the current shutdown. But CNN's New Day Saturday really larded up the airwaves with Twitter sob stories, and then let a federal employee union leader claim one worker can't afford a tombstone for his wife now.

But what if the shutdown ends soon? David Martosko of London's Daily Mail flagged this tombstone-and-tears segment on Twitter, writing: "Is it January 11 already? Because that's when shutdown furloughs will miss their first paychecks." First, CNN anchors Christi Paul and Victor Blackwell quoted Twitter testimony:

CHRISTI PAUL: You know the shutdown is affecting thousands of federal workers who aren't going to be getting a paycheck this pay cycle and they're taking to social media to talk about what they're worried about, how they're going to pay their bills and we want to read some of those to you.

VICTOR BLACKWELL: Yes, this federal worker Tweets, let's put it up on the screen. "We are both veterans, husband has 20 years of service with 4 combat tours. We will not be able to pay our mortgage if this persists."

PAUL: For this federal worker paying medical expenses is a worry saying, "My insurance premium is $600 per month and my son's insulin and pump supplies are an additional $600 per quarter. Barely making it. Now I'll be going to work ... paid in the future."

BLACKWELL: And from another federal worker. "I'm a furloughed Fed. I spent the day calling the banks for the mortgage and car loan, the electric company, the gas company, the credit card company. I have some savings so I'll be OK for a bit, won't be buying the new car to replace the 17-year-old Toyota now."

PAUL: And one more here. "Got things for Christmas that I'm not unpacking and receipts are in my purse so I can return if needed for grocery money. "

CNN analysts who hate the media just reporting Trump's tweets, even if they're misleading, ought to explore this reporting trend. Did CNN attempt to prove any of these claims? Or did they just read them off the Internet without checking? Also not considered: whether the tweeters might be trying to embarrass a president they despise. For example, see the "pinned tweet" from "Soonergrunt" -- the third tweeter quoted, the "furloughed Fed" -- which CNN could easily see at the top of his Twitter page, from two years ago: 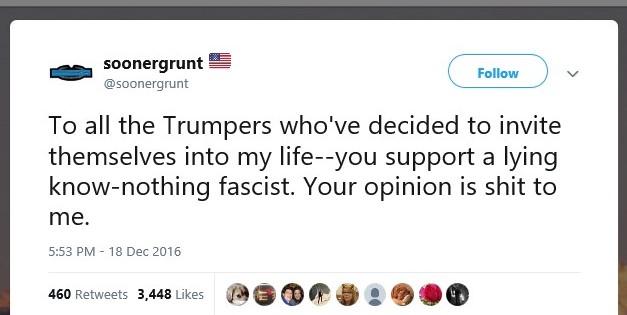 Then CNN viewers heard unverified claims from a union leader: 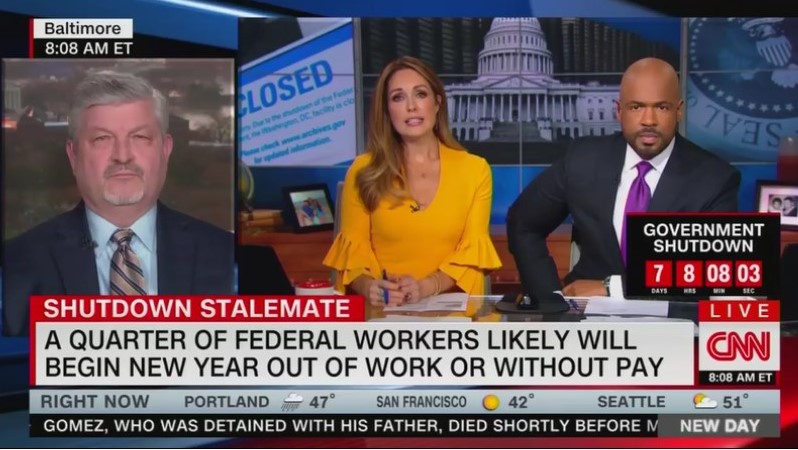 PAUL: Thank you so much for being with us Tony. I want to read a quote from you. This was in the Daily Herald of Chicago and it mirrors much of what we just read. You said, "I've had members come to me saying they're returning holiday and Christmas presents they bought because they're worried a about paying rent. Congress should be doing everything in its power to get the government up and running again."

With that said, what are you hearing from people who have no idea how long this is going go on?

I think one good story - it's an unfortunate story but one that I think is worth hearing is we had an individual let us know that recently his wife died. He is unable at this time because of this shutdown, to pay for her headstone and said at the tail end of his commentary to us that he is brokenhearted over that. And you know, that I think in some ways kind of encapsulates what this is - what's going on and what's happening to federal workers. Our federal workers do a great service to this country and to be treated the way that they are is indeed unfortunate.

BLACKWELL: That is terrible that man can't pay for a headstone for his wife!