AP's latest "Fact Check" only underlines how much "context" is brought to the "fact" table, and how that "context" is loaded up to the service of a liberal/Democrat narrative.

But wait: Ceren noted that in an August 18, 2016 briefing at the State Department, AP reporter Bradley Klapper forced Obama spokesman John Kirby “to admit on camera that $1.7 billion they gave Iran was quid pro quo for hostages.” 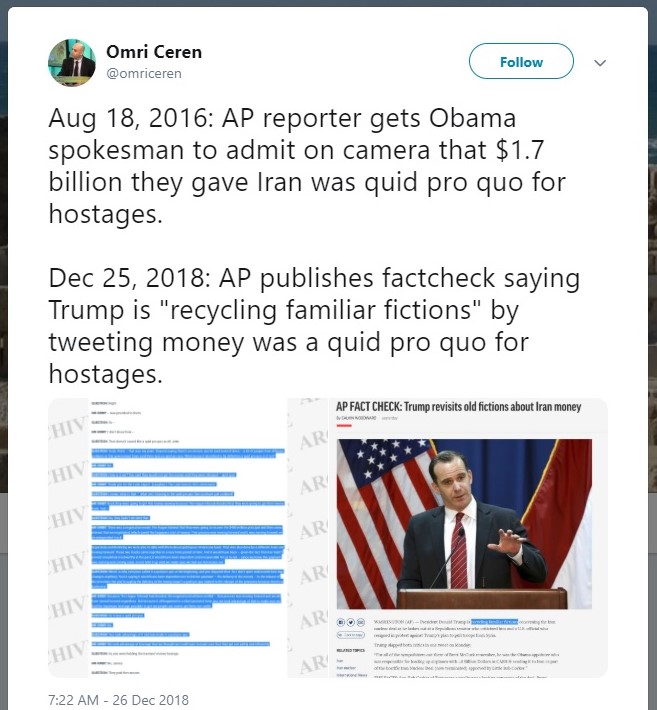 WASHINGTON (AP) — President Donald Trump is recycling familiar fictions concerning the Iran nuclear deal as he lashes out at a Republican senator who criticized him and a U.S. official who resigned in protest against Trump’s plan to pull troops from Syria.

Trump didn't mention hostages, but slammed Brett McGurk, who's now resigning: "remember, he was the Obama appointee who was responsible for loading up airplanes with 1.8 Billion Dollars in CASH & sending it to Iran as part of the horrific Iran Nuclear Deal (now terminated) approved by Little Bob Corker.”

Here’s the video, cued to the exchange between AP's Klapper and Kirby (now a CNN analyst, like many Obama officials):

AP: Beyond saying there's no ransom, you said several times -- a lot of people from different podiums in this government have said there was no quid pro quo. What you just described is by definition a quid pro quo, is it not?
KIRBY: No.
AP: How is it not? You said they would not get the money until they were released. Quid Quo.
KIRBY: Thank you for the Latin expert.
AP: What is that?
KIRBY: The Latin is (ph)...
AP: What am I missing in the quid pro quo that you have just outlined.

AP: No, they hadn't decided that.
KIRBY: There was a negotiation inside the Hague tribunal that they were going to recover the $400 million principal and then some interest that we negotiated which saved the taxpayers a lot of money.
That process was moving forward and it was moving forward on an independent track. Separately and distinctly we were also in talks with them about getting our Americans back. That was also done by a different team and moving forward.
These two tracks came together in a very finite period of time and it would have been -- given the fact that Iran hadn't proved completely trustworthy in the past, it would have been imprudent and irresponsible for us to not -- since we knew this payment was coming and coming soon to not hold it up until we made sure we had our Americans out.
AP: Which is why everyone called it a quid pro quo at the beginning and you disputed that, so I don't quite understand how that changes anything.
You're saying it would have been imprudent not to link the payment, the delivery of the money, to the release of the prisoners, but you're saying the delivery of the money wasn't a quid pro quo related to the release of the prisoners because there's a backstory.
KIRBY: Because -- because the Hague Tribunal had decided, the negotiation had been settled, that process was moving forward and would have moved forward regardless. But because it all happened in a short period of time, yes, we took advantage of that to make sure we had the maximum leverage possible to get our people out and get them out safely.
AP: So it was a quid pro quo?
KIRBY: No.
AP: You took advantage of it and you made it a quid pro quo.
KIRBY: We took advantage of leverage that we felt we could have to make sure that they got out safely and efficiently.

AP's Woodward today sounds a lot like John Kirby in 2016: "Trump, for years, has told a dodgy story about payments made to Iran as part of the agreement." It's a "dodgy story" because it was a "debt to Iran," or "Iran's money," so somehow giving it back to them during the Iran-deal negotiations somehow wasn't connected. These are AP's facts:

—The $1.8 (actually $1.7 billion) was a debt owed to Iran, which bought military equipment from the U.S. that it never received because relations ruptured when the shah was overthrown in 1979.

—The debt was in international arbitration for years. As part of that, Iran paid settlements of more than $2.5 billion to U.S. citizens and businesses.

—$400 million, representing the principal and held in a U.S. government trust fund, was paid in cash and flown to Tehran on a cargo plane, which gave rise to Trump’s dramatic accounts of money stuffed in barrels or boxes and delivered in the dead of night.

These facts don't negate Klapper's original point, that Team Obama gave back this money as part of the Iran deal, and to insure the hostage release.

Trump's tweet wasn't completely accurate. But a lot of the "facts" here are subject to partisan interpretation, as in AP's Woodward beginning with the assertion that Sen. Corker was "a leading opponent of the Iran deal." It's accurate that Corker ultimately voted against the Iran deal, but Corker facilitated the Iran deal by helping the Obama adminstration avoid classifying the deal as a treaty.

The fact-checkers have jumped en masse to defend against Corker as Iran-deal enabler – PolitiFact, and so on. So how do they explain this Politico puff piece from 2015: “How Cardin and Corker clinched the Iran deal.”

The low-key Cardin engaged in a furious round of negotiations with gregarious Senate Foreign Relations Committee Chairman Bob Corker, prompting something that was once viewed as almost unthinkable: a bipartisan deal for Congress to review an Iran nuclear deal — with the blessing of President Barack Obama and House Minority Leader Nancy Pelosi.

We have rated this "fact-check" by the Associated Press as Deeply Distorted. For similar analyses, please visit our Fact-Checking the Fact-Checkers site.