Our friend and former CNS News colleague Penny Starr at Breitbart wrote "A reporter with the left-wing Washington Post disapproves of a triple-amputee veteran’s Go Fund Me campaign to pay for a wall on the U.S.-Mexico border that has raised more than $13 million." So he set out to cancel it. The rationale? Go Fund Me doesn't allow fundraising for ‘"intolerance of any kind relating to race, ethnicity, national origin" and so on. To the media, a border wall, is loaded with racism and intolerance. And "Is that, like, allowed"?

Go Fund Me did not agree. Here's how "Tech policy reporter" Tony Romm's activism unfolded on Twitter on December 20: 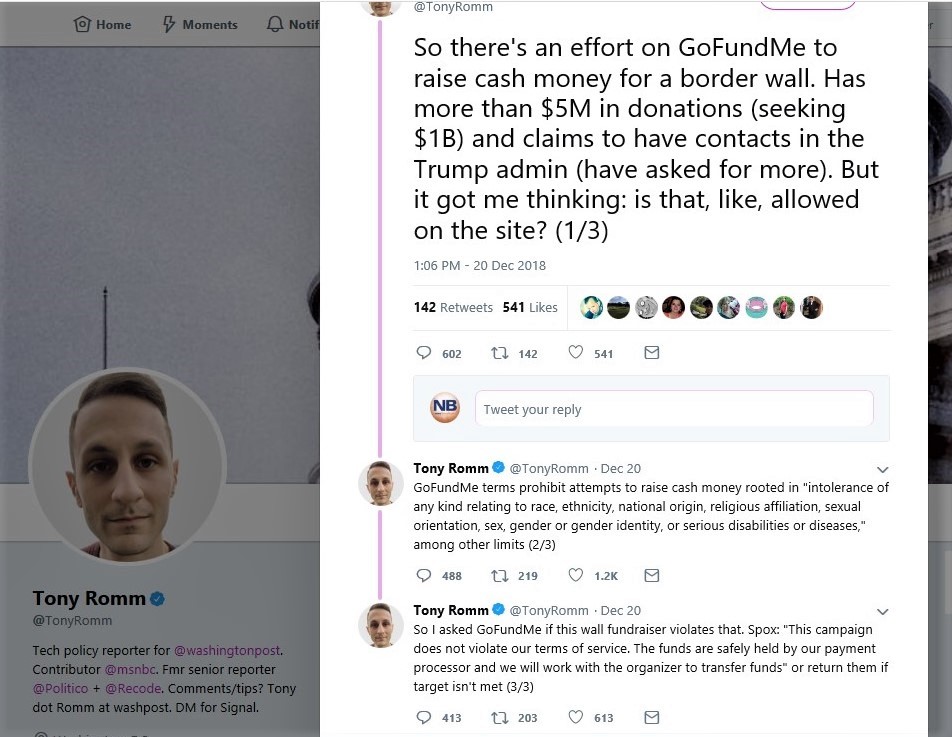 He reported a spokesman replied: "This campaign does not violate our terms of service. The funds are safely held by our payment processor, and we will work with the organizer to transfer funds’ or return them if target isn’t met.”

It should be said that this funding effort is a demonstration of people's serious desire to see a border wall built, but as a percentage of what the federal government will spend to build a wall, these millions are a tiny puddle. Nonetheless, why on Earth is a so-called reporter trying to pull the plug on a triple amputee? Which editor at the Post encourages reporters to pick on disabled veterans and question them as intolerant racists?

Romm’s efforts were unsuccessful, but [Brian] Kolfage thinks his efforts will work because the American people are behind building the wall.

Laura Ingraham asked Kolfage on her The Ingraham Angle show on Fox about critics that claim the campaign is a “publicity stunt.”

“I’d say they’re full of crap,” Kolfage said. “This is the United States, and we can do anything we want. If people want to donate to that wall, they can do it.”

“This is America coming together,” Kolfage said. “They want the wall, and they’re putting their money where their mouth is.”