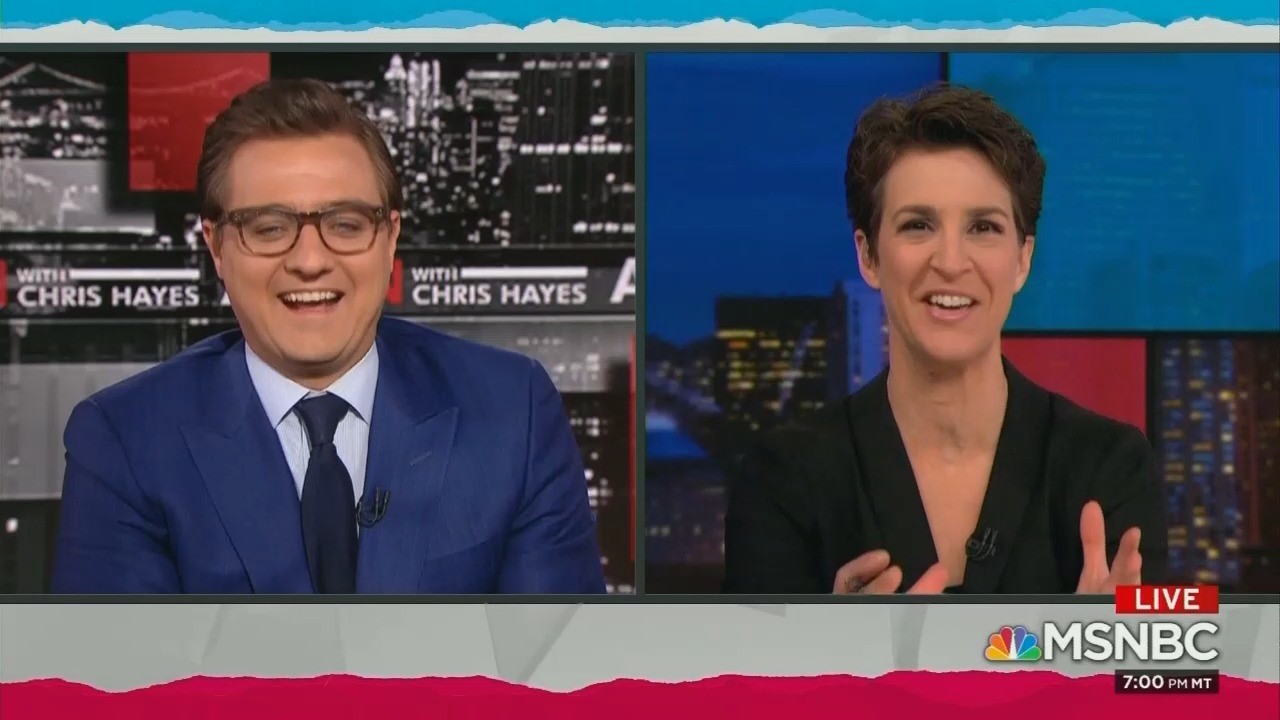 In case you couldn't get enough of Chris Hayes and Rachel Maddow on MSNBC TV, Maddow chatted with Hayes last month for his online podcast Why Is This Happening? Maddow was discussing her podcast Bag Man about former vice president Spiro Agnew, and how he was a corrupt racist demagogue like George Wallace. Then came her declaration of a vague religious faith in God:

RACHEL MADDOW: I mean, I am a religious person. I am a person who has a belief in God and has religious faith, and thinks about things in terms of how we all answer to God at the end of our lives, and so therefore, I believe that those types of badness are related, because they come from the same bad place in the universe. But that is a fundamentally non-scientific way of looking at it.

RACHEL MADDOW: I mean, I'm telling you my prejudice on these things is like, yeah, corruption and racist demagoguery must go together because those things come from the same dark part of the earth. But, I mean, it may just as easily be coincidence.

Is it time now for Theology Today with Rachel Maddow? Don't jump too far ahead, because soon she whacks the evangelicals as she discusses "This anti-intellectual, anti-elite line of argument that we've seen from right-wing populists since the beginning of time."

The new Justice Department spokesperson is Kerri Kupec, a graduate of Liberty University's law school. These liberals describe Jerry Falwell's evangelical followers as "poor, uneducated, and easy to command," and then wonder why they're accused of elitism.

Hayes later admits he's getting verklempt over Maddow: "I just got goosebumps, because I feel like I just saw... I've known you for a very long time, and I feel very close to you. I'm getting weirdly choked up, but I just feel like I just saw this very clear moment of your moral cosmology. You are, the thing you said about being a person of faith, just the sense that there's a right thing to do and a wrong thing to do, and you're going to have to answer at the end of the day, and that that's actually a thing that's distinct."

Maddow replied "That's why I raised the issue of faith, because for me, it is a little bit mystical," discussing how liberal Republican Elliott Richardson prosecuted Agnew. "What's the thing that you do? You make the decision with integrity, with selflessness, and with an eye on history, and you hope that you can answer for it when you die. It's just — it's a little mystical."

What's a little odd here is that Rachel Maddow thinks integrity is so important....and hasn't located any serious integrity problems with Bill and Hillary Clinton, like that Juanita Broaddrick matter.