Polls Show: 'Pretty Much All of Journalism Now Leans Left' 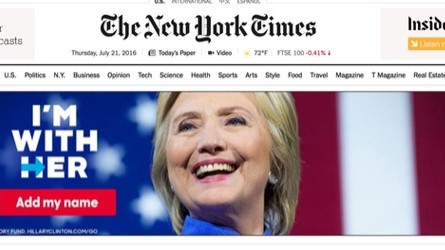 Investor's Business Daily pointed to several recent media surveys that keep proving the liberal tilt of the press....even the financial press. Their editorial was titled "Pretty Much All of Journalism Now Leans Left, Study Shows.'

Researchers from Arizona State University and Texas A&M University questioned 462 financial journalists around the country. They followed up with 18 additional interviews. The journalists worked for The Wall Street Journal, The New York Times, The Washington Post, Associated Press and a number of other newspapers. What they found surprised them.

Even the supposedly hard-nosed financial reporters were overwhelmingly liberal. Of the 462 people surveyed, 17.63% called themselves "very liberal," while 40.84% described themselves as "somewhat liberal."

That's a ratio of 13 "liberals" for every one "conservative." Whatever happened to ideological diversity?

Please remember this as you watch the business news or read a financial story in the paper. You might want to take its message with a grain of salt. That's especially true if the piece seems unduly harsh on the free-market system and its many proven benefits. Or if it lauds socialism as an "answer" to society's ills.

A post-election survey of 1,000 voters by McLaughlin & Associates found that "a forceful plurality" (48  percent) of respondents believe the media coverage is "unfair and biased" against President Trump. Even 16 percent of Democrats agreed (as well as 48 percent of independents and 80 percent of Republicans).

Thirty-four percent said the media were "fair" and not biased" in their Trump coverage. Nearly two-thirds of Democrats (63 percent) picked that option. Eleven percent of Democrats tried to claim the media was "unfair and biased" in favor of Trump!

A Rasmussen Reports survey in late October found that 45 percent of all likely voters in the midterm elections believed "that when most reporters write about a congressional race, they are trying to help the Democratic candidate."