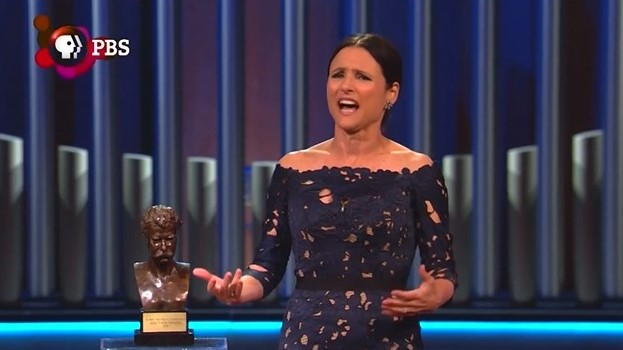 Even the awards shows on PBS have a liberal bias. Julia Louis-Dreyfus, whose career as a comic actress has included star turns on Saturday Night Live, Seinfeld, and Veep, accepted the Mark Twain Prize for Humor from the Kennedy Center in Washington on October 21. In the ceremony, which airs on PBS stations, the actress slammed Supreme Court Justice Brett Kavanaugh.

“It has been in the news lately. Back in fourth grade, as a matter of fact, I was in a very serious Holton-Arms production of Serendipity. You know it’s funny with us Holton girls — I remember every detail of that play. I could swear to it under penalty of perjury. And yet, I don’t remember who drove me to the show or who drove me home. Or if Squee or Tobin were there. Or if Brett put it on his weird wall calendar.”

“This, by the way, is totally true, and not some kind of subtle attack on our newest Supreme Court Justice ― for God’s sake the man has suffered enough,” Louis-Dreyfus cracked.

This is in the Mark Twain Prize tradition. In 2012, Ellen DeGeneres won the prize, and used her acceptance speech to mock Mitt Romney's call to cut public funding for PBS: “Thank you, PBS. I’m so glad to be part of your final season.” On the red carpet for that event, she told Politico "If you’re a woman, you should be very, very scared of" a President Mitt Romney. (Mitt Romney!)

Louis-Dreyfus was one of nearly 200 Holton-Arms alumni who signed a letter supporting her after she came forward to accuse Kavanaugh of sexually assaulting her when they were in high school. “We believe Dr. Blasey Ford and are grateful that she came forward to tell her story,” said the Holton-Arms women. “It demands a thorough and independent investigation before the Senate can reasonably vote on Brett Kavanaugh’s nomination to a lifetime seat on the nation’s highest court.”

The women also said Ford’s accusation “is all too consistent with stories we heard and lived while attending Holton. Many of us are survivors ourselves.”

Louis-Dreyfus, who recently battled breast cancer, also worked in a joke mocking Obamacare critics: "Cancer isn’t at all funny but a big part of dealing with it has been finding the funny moments. The old cliche about laughter being the best medicine turns out to be true. Which is good, because that’s what the current administration is trying to replace ObamaCare with!"

PS: Tina Fey was among those assembled to praise Louis-Dreyfus, and she got her liberal kicks in:

"By the way, everyone talks about all the parallels between Veep and the current administration," she said. "But I think it's more like Seinfeld, just a bunch of selfish (expletive) who don't give a crap about anyone but themselves."

Fey continued, praising Louis-Dreyfus while slighting the powers that be. "She's a tireless advocate for women's health and the environment," Fey said, "and a bunch of other stuff that won't exist pretty soon."