FLASHBACK: Paula Jones Was a 'Dogpatch Madonna' Who Pinched Men at the Red Lobster

All the national journalists acting outraged this week that President Trump would mock the holes in the testimony of Christine Blasey Ford always forget that Bill Clinton's accusers were slashed by the "mainstream" press. Let's recall when Paula Jones sued President Clinton for sexual harassment in 1994. 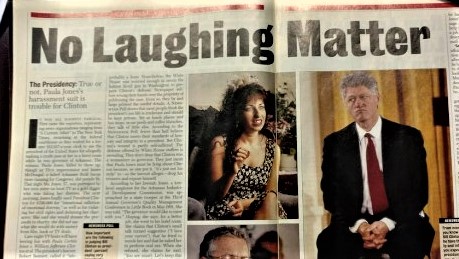 Newsweek's May 15, 1994 story on Paula Jones began with the line "It was all slightly farcical." It was somehow a farce that a "$12,817-a-year clerk" was suing the president for "a crude pass." Jones "was portrayed by her own sister on local TV as a gold digger who was faking her distress." Jones sued the president for $700,000, and said she'd donate the proceeds to charity if she won. Then Newsweek added: "she did not say what she would do with money from film, book, or TV deals." This was not the Anita Hill treatment.

The magazine uncritically cited Clinton attorney Bob Bennett, who "says he has 'people coming out of the woodwork' to discredit her story." (Three years earlier, when Sen. Alan Simpson said something like that in the Hill-Thomas hearings, Newsweek's Eleanor Clift compared him to "Red-baiter Joe McCarthy" and Joseph Stalin.)

Newsweek then quoted brother-in-law Mark Brown describing a gumbo cookoff in Stuttgart, Arkansas: "She went with one man and when she got there, she spotted another one. She goes right up to him, puts her leg between the legs of the other man and rubs herself up and down on him...Promiscuity? Good gosh. Her mother is fixing to get the shock of her life when Paula's life comes out...She went out and had herself a good time. I've seen her at the Red Lobster pinch men on the ass."

This story also quoted Newsweek polls showing only 14 percent found it "very important" in "judging Bill Clintoin as president (no word on the number for "important") and 59 percent found "the media is paying too much attention to Bill Clinton's private life."

Newsweek followed the next week (May 22) with "Paula Jones's Credibility Gap." No Newsweek story ever detailed "Anita Hill's Credibility Gap." Reporter Melinda Beck wrote "old friends" portrayed Jones as "a Dogpatch Madonna who cut loose after a strict religious upbringing...When Paula got to a secretarial school in Little Rock, a longtime friend said, she started smoking, drinking beer, dancing, and other things that were forbidden at home." A former boyfriend said he broke up over her "flirtatious behavior."

Former Clinton press secretary Mike Gauldin slammed Jones, saying she "liked to mill aroud the reception desk in the Governor's office" and "I had to listen to hours of beauty-shop inane conversation....She was a [Clinton] groupie."

Beck added: "In theory, the tangy tales floated by relatives and old boyfriends about Paula's past should have little bearing on her charges against Clinton -- any more than a rape victim's sexual history should be used against her in court. But defense attorneys do that all the time."

So do journalists -- when the Democrats are in trouble.