FoxNews.com asked MRC president and founder Brent Bozell for an opinion piece on the unfolding news this week about Google's left-wing culture, and how it leaks into their products, especially after Trump won the 2016 election. On Friday, it's on the Fox News home page. 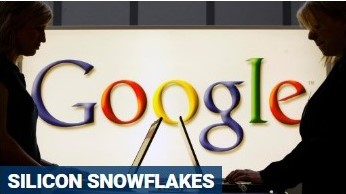 Conservatives have pointed to mounting evidence that Google is waging war on them. They’ll cite everything from YouTube banishing conservatives for espousing their beliefs, to Google partnering with left-wing organizations to disparage conservative thought itself. All along, Google has issued bizarre, barely understandable statements denying these charges.

Now Google executives have been caught again – twice in the past two weeks. Actually, they have indicted themselves with explosive leaks of their own material. And it goes to the very top of the corporate food chain.

Breitbart has released an explosive video of an hour-long post-election Google meeting featuring staff and top executives discussing their despair over the election of President Trump in 2016. There’s a reason the video has a “Confidential – Internal Use Only” label on top. It’s about the last thing that company wanted the public to see.

The video features Google co-founder Sergey Brin opening the meeting by declaring: “I think it’s a very stressful time. It conflicts with many of our values … voting is not a rational act.” In one fell swoop he both endorsed Hillary Clinton and disparaged the Trump voters who Clinton referred to as “deplorables.”

The video features Google Vice President for Global Affairs Kent Walker dismissing the election results as “a hiccup” interrupting the march of the left.

Read the rest at Foxnews.com.

Isn't it funny how news outlets (like CNN) can spend months obsessing over what Russians might have tilted the election to Trump by purchasing Facebook posts that didn't mention either candidate, but they can't find this breaking news?

In the current information age, Google is a major player. It is the dominant brand of search engine, more dominant than Kleenex owns facial tissues. According to the marketing-analytics firm Jumpshot, Google has a 90.8 percent market share of online searches.

But wait, Google bought YouTube...that’s another 4.3 percent. It has a 95.1 percent share of searches. These two forces can make a powerful push for progressives, and freeze out conservative voices around the world.

The notion that Google is a neutral arbiter of information is finished. The evidence that Google is tilting our democracy is now obvious. Social media looks just as biased as the “news” media. Conservatives can’t allow the Left to claim that democracy “dies in darkness” unless they dominate the media with their propaganda everywhere Americans try to communicate.