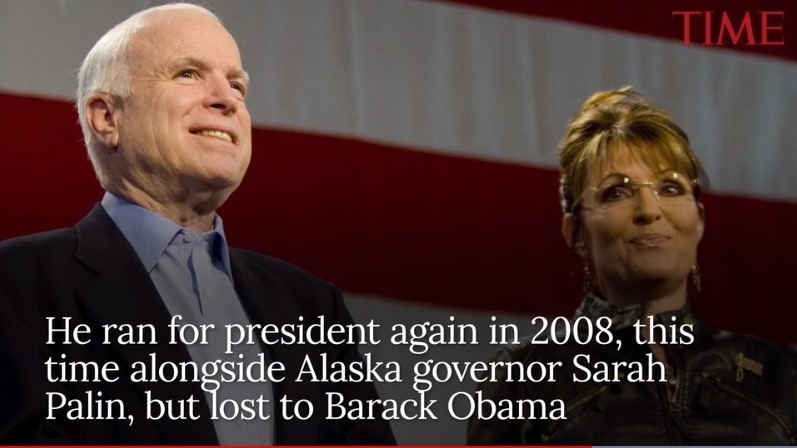 Time magazine took a week off in the dog days of August, so we weren't "treated" to a glowing cover-story package following the death of Sen. John McCain. But on Thursday, Time.com published a glowing eulogy video of McCain above a typical expression of disgust at President Trump's failure to behave like a traditional politician and say glowing things about someone you didn't like one bit (and who banned the president from his funeral).

“It pisses me off to no end, and I let the president know it,” Graham, McCain’s longtime friend, said on CBS This Morning.

Trump and McCain had a long running feud that extended past the Arizona Republican’s death.

Trump in 2015 said McCain, who was a prisoner of war for more than five years during the Vietnam War, was “not a war hero.”

Time did not review what they wrote about McCain in 2008 when the maverick Republican stood in the way of their idol Barack Obama -- "born in the imagination out of scraps of history and hope," they wrote at the end of 2008.

Though McCain is quick to say he considers his opponent a "patriot," McCain and his aides now view Obama with the same level of contempt they once reserved for tobacco-company executives, corrupt lawmakers and George W. Bush. They have convinced themselves that Obama isn't honorable, that he does not love his country as much as he loves himself.  That makes it easier to justify whatever is necessary to defeat him -- especially if it's done in the pursuit of honor.

McCain genuinely believes that America's honor is at stake in this election. His friends say he's learned through hard experience as well as family values that tough talk backed by force is the only language our enemies understand, that vacillation in the face of evil will dishonor America and endanger our safety. And this obsession with national honor has driven his belligerent approach to dishonorable regimes -- not only North Korea and Iraq, but also Iran, Cuba, and most recently, Russia. His hard-edged approach has a visceral appeal and an undeniable constituency; it is also popular with some conservatives who are otherwise skeptical of McCain. But it's a radical and potentially dangerous approach to foreign affairs. In a messy world full of unsavory despots, belligerence can have its costs, even when it's belligerence in the pursuit of honor.

This summer McCain has waged a non-stop assault --from the derision of his "celebrity" ads comparing Barack Obama to Paris Hilton, to McCain's own filthy attack on Obama as someone who would "rather lose a war than lose an election." (Obama has tried to strike back, but creative personal attacks just seem foreign to the Democrats' DNA.)....

I suspect that this year's McCain is closer to the real thing than the noble 2000 version. This one is congenitally dark, the opposite of Reagan -- not confident enough in the substance of his ideas, especially on domestic policy, to run a campaign that features them.

Then there was the October 27, 2008 Nancy Gibbs cover story on "Does Temperament Matter?"

But some veterans of Arizona politics paint a more complicated picture of McCain than just a crusader against corruption. They talk of bullying and intimidation, of meetings when he banged the table so hard they feared it would split. In one case, recalls former Arizona Senator Dennis DeConcini, when he refused to fire an aide who had annoyed McCain, "to put it politely, he told me that I could go do something with myself." DeConcini, a Democrat, says that  "In my eight years with him, I learned that John just hates it when you disagree with him. If you press it, he just falls back on his patriotism. And then he blows up."

After that portrait of McCain coming unglued, Gibbs then turned to Sen. John Warner who spun the other way, insisting he'd never "witnessed any moment" McCain "wasn't in complete control over what he was saying and doing."