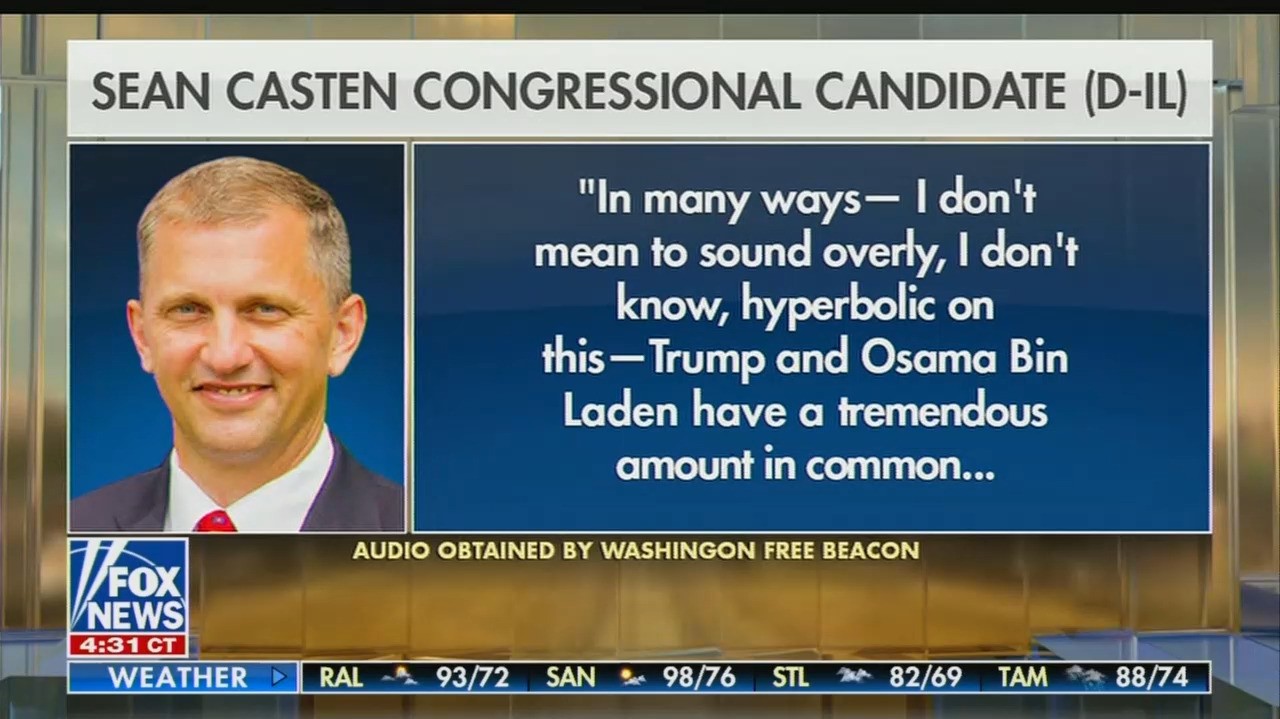 Brent Scher at the Washington Free Beacon reported on Thursday that the Democratic candidate in the sixth Congressionial district of Illinois, Sean Casten, declared in a Q&A about gun violence at schools that President Trump had a lot in common with Osama bin Laden, who ordered the 9/11 attacks....and that Trump's young-male voters are like al-Qaeda recruits.

"In many ways -- and I don't mean to sound overly, I don't know, hyperbolic on this --Trump and Osama bin Laden have a tremendous amount in common," Casten said during a public meet and greet with voters in Wheaton, Illinois.

"They have both figured out how to use the bully pulpit to activate marginalized young men. It's the same tool," he continued. "Every demagogue has done this, right? Find a group of angry people and give them something to be angry at."

Casten's campaign did not respond to the first calls from the Free Beacon, but campaign spokesman Greg Bales responded later on Thursday, saying that “Sean’s words were poorly chosen, and he regrets them.”

Fox News picked up the story on Friday morning, if not the other networks -- since they have shown they consider it fair game to compare Trump to Hitler, Stalin, and other mass murderers with a high body count than bin Laden:

This isn't a first. In June, we noted liberal congressional candidate Dan Helmer tried (and failed) to win the Democrat nomination in Virginia's 10th District by proclaiming in a TV commercial "After 9/11, the greatest threat to our democracy lived in a cave [picture of Osama bin Laden]. Today he lives in the White House."  In Helmer's case, it wasn't a one-time gaffe. The Washington Post reported Helmer uses the line in nearly every public appearance." He thought it was golden in a Democrat primary. It wasn't. He came in fourth with 12.5 percent of the vote.

Fox picked that news up, too. They asked Sean Spicer for comment, and he said "the idea that you are comparing the president of the United States to a terrorist that inflicted death to our country, is reprehensible."