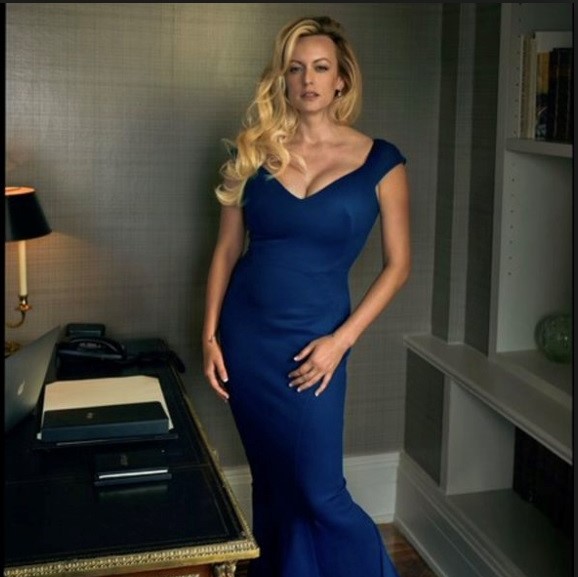 The long, gushy profile was written by Amy Chozick, the Hillary-adoring campaign correspondent for The New York Times. It started with the usual sugar blast: “she became globally known by a single name: Stormy, the unlikely, embattled symbol of our tempestuous times.”

This is a true paint-by-numbers job. Let’s run through the hoops.

Stormy’s fun to be around!

In person, she is nothing like that stoic, on-message woman. She is blunt, foulmouthed, funny. I ask her for more details on her alleged 2006 affair with Trump. “How many details can you really give about two minutes?” she says. Two minutes? I ask. “Maybe. I’m being generous.”

It is a cruel, if unsurprising, irony that through everything that has transpired, Daniels is the one who has been living like a wanted criminal. “We’ve been in a couple car chases,” she tells me at our interview. “We’ve had people put notes under the door, which means they know what hotel I’m in, which means we’ve had to change hotels in the middle of the night.”

Stormy’s somehow not cashing in with her strip-club tour, she’s just “running with it.”

Munyan and Barrale know that critics see Daniels as a brazen opportunist capitalizing on her fifteen minutes of fame. Their response? So what? “Is she just taking that fifteen minutes and running with it? She’s like, ‘Yeah, I gotta work here. I have a family to support,’ ” Munyan says. Barrale chimes in with fatherly pride: “She got thrown into this, and she adapted and ran with it. She’s a street fighter. She will take him on.”

Stormy says her audience isn't so white and male any more. Now it's filled with women and Trump-haters of all kinds. She says "There are people crying every night, and I’m like, ‘There’s no crying in titty bars!’"

Chozick insists he's not running the show. The relationship is "equitable." Stormy "clearly trusts and relies on Avenatti, but she also treats him like a lovable, well-meaning stepbrother who forgot to take his Ritalin."