Washington Post political reporter Aaron Blake should not submit his name for the "Fact Checker" desk at the Post. Because he's not good at it. He wrote a piece titled "Sarah Huckabee Sanders indicts the media -- on bogus, Trumped-up charges." He also tweeted out his take on her "exaggerations or inventions": 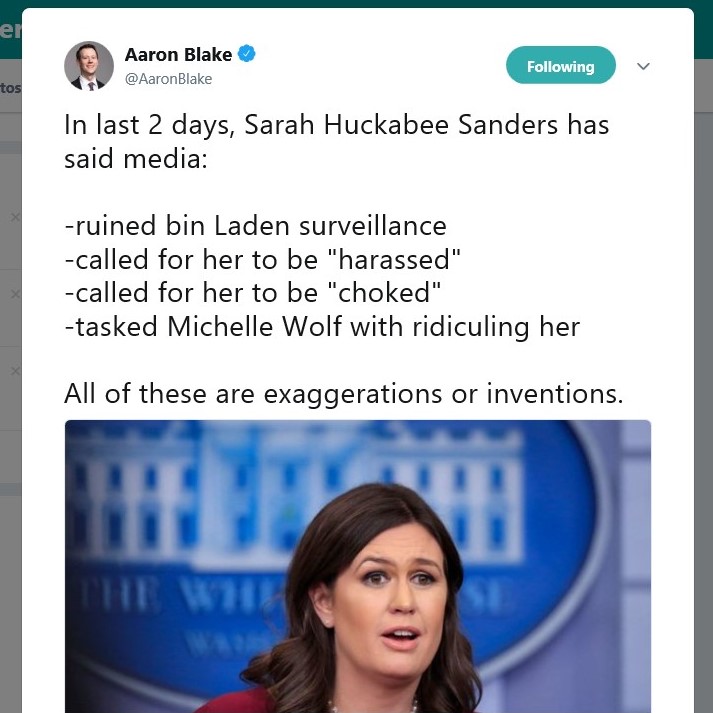 Blake tried to take apart this quote from the press secretary:

SARAH HUCKABEE SANDERS: The media has attacked me personally on a number of occasions, including your own network, said I should be harassed as a life sentence, that I should be choked. When I was hosted by the Correspondents' Association, which almost all of you are members of, you brought a comedian up to attack my appearance and call me a traitor to my own gender.

Blake claimed "Nobody said Sanders should be harassed as a life sentence."

He noted the concept came from his Post colleague Jen Rubin who said this on MSNBC: "Sarah Huckabee has no right to live a life of no fuss, no muss, after lying to the press -- after inciting against the press. These people should be made uncomfortable, and I think that's a life sentence frankly."

How Sanders is "exaggerating" this instead of stating it plainly is lost on people with an ounce of common sense. Blake didn't run the full quote. That would end badly.

Then Blake claimed "Nobody advocated for Sanders to be choked." 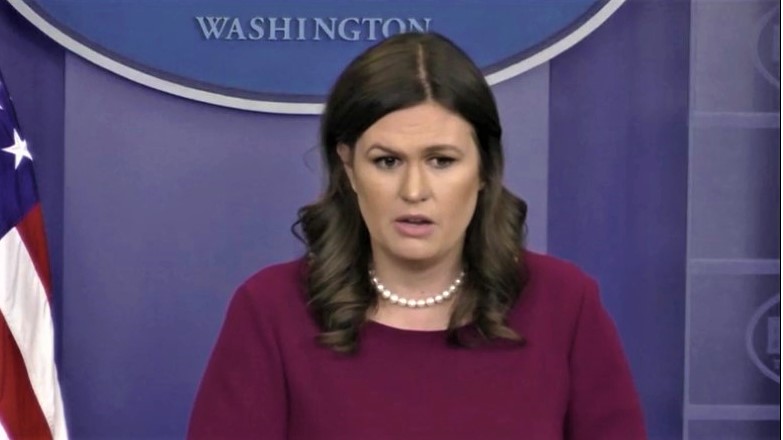 He noted this came from MSNBCs's Nicolle Wallace, who said: “Kristen Welker, how do you resist the temptation to run up and wring her neck?"

Blake thought it was somehow "bogus" because it wasn't a "call to action." But Sanders didn't say it was a cause of action. She said people thought she ought to be choked...which Wallace implied.

Grammar experts on the Internet explain: "To wring is to twist, squeeze, or clasp firmly, especially to extract liquid. It is the appropriate word in wring [one’s] neck, meaning to choke."

Finally, when it came to Michelle Wolf's nasty Sanders-bashing at the White House Correspondents Dinner, Blake claimed: "Nobody asked a comedian to say these things," and then noted several reporters denounced Wolf's attack on Sanders.

The White House Correspondents Association hired and paid Wolf, knowing perfectly well she was a sneering leftist. WHCA president Margaret Talev touted Wolf’s “feminist edge” and “strong independent journalism” as the reason why she was chosen as "entertainment." They could see her gender-traitor tweets, like "ivanka trump helps women about as much as an empty box of tampons."

Blake said Sanders' "arguments showed exactly why the media is so hard on the Trump White House -- and rightfully so."

Now that's bogus. The Post is hard on the White House because Democrats lost. Their usual mode is a puff piece for Obama spokesman Jay Carney and his taste in indie rock bands. Or warmly recounting Clinton press secretary Mike Curry's "genial barbs and skillful spinning of reporters."