CNN has blurred any distinction between reporting and editorializing not only on television, but also on their own website. On Thursday, CNN Pentagon correspondent Barbara Starr raged against President Trump just like every other correspondent and host on CNN....this time in a commentary on CNN's online opinion page.

Starr is employing the usual cant about how free speech and a free press is a core value of America that our soldiers are sworn to die to defend. Therefore, once again, CNN and their Obama-loving, Hillary-voting pals are the embodiment the First Amendment and anyone who resists their propaganda is opposed to freedom: 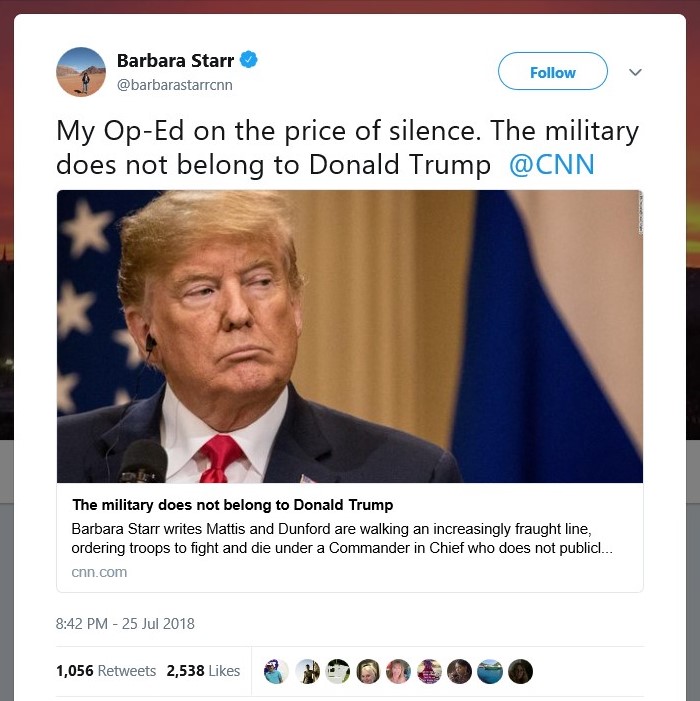 Continuing to attack both of those fundamental American pillars is clearly something that President Donald Trump feels resonates with his political base, even after 19 months in office. But as the Commander in Chief continues uninterrupted in his attacks, there is a problem boiling to the surface.

Defense Secretary James Mattis and Chairman of the Joint Chiefs General Joseph Dunford -- two of the top commanders -- are walking an increasingly fraught line, ordering troops to fight and die under a Commander in Chief who does not publicly share the values the troops are obligated to defend.

Trump is now an accelerant. At what was supposed to be a presidential speech to the Veterans of Foreign Wars this week, the President, as he almost always does, attacked the media, saying, "Don't believe the crap you see from these people -- the fake news." Many in the audience cheered. And Dunford had just been there the day before. The VFW scolded its members on their reaction to Trump, saying it relies on the media to cover veteran's issues.

But there had been a little noticed, more worrisome incident. In March, Trump appeared at the Marine Corps Air Station Miramar near San Diego. Speaking before hundreds of Marines, he again pointed to reporters covering the speech and called them "fake news," leading hundreds of uniformed personnel to applaud wildly for a political statement attacking a press corps they are sworn to defend....

Trump has now taken it a step further with what some say is an Orwellian declaration: "What you're seeing and what you're reading is not what's happening." But troops don't have the luxury of serving only the parts of the nation's fabric they agree with. They serve the nation. Despite Trump's tendency to talk about the military as "his'" and "my generals," nothing could be further from the truth. The US military is and must stay apolitical. It is not Trump's.

In the cockeyed liberal logic of CNN and Starr, Mattis and Dunford need to condemn the president (and defend CNN) or we have politicized the military.

At the risk of being just as repetitive as CNN, we should remind the Pentagon brass that CNN falsely accused the U.S. military of gassing Laotians during the Vietnam War.

CNN couldn't show enough Abu Ghraib photos worldwide as it explained how each image was a terrorist recruitment poster.

CNN broadcast grainy footage of terrorists calling themselves the Islamic Army of Iraq showing their snipers time and again shooting and presumably killing American soldiers, to demoralize the folks at home. There's even more listed here.