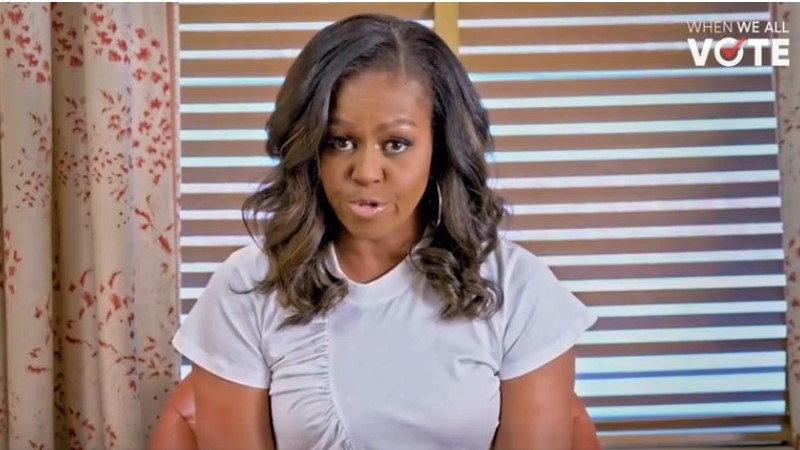 Is anything Michelle Obama does about the midterm elections "nonpartisan"? Politico is trying to pretend it can happen. Their headline is "Michelle Obama wades into the midterms: The new initiative will be nonpartisan, frustrating some Democrats who’d like the former first lady to hit the campaign trail for candidates."

Then Edward Isaac-Dovere began: "Michelle Obama is jumping into the 2018 campaigns with a voter registration initiative that will be strictly nonpartisan — exciting and frustrating top Democrats who’d like the popular former first lady to actively campaign for candidates."

It's "nonpartisan"....and it will be stuffed with Team Obama people:

Named “When We All Vote,” it will be stocked with prominent Obama alumni, including Valerie Jarrett as president of the board and former first lady chief of staff Tina Tchen as treasurer. Pete Rouse, an Obama senior adviser who served as interim White House chief of staff, will also be on the board. The CEO will be Kyle Lierman, a former senior policy adviser in the White House who founded Civic Advisors, a “social impact strategy” and consulting firm home to a number of Obama White House alumni.

It's "nonpartisan"...and it relies on a pile of Hollywood and Broadway stars, like Lin-Manuel Miranda, who in 2016 called Donald Trump a "POS" on Saturday Night Live (also, "nonpartisan"):

They explicitly say they are trying to register "the young people" that will "change the world" (for the liberals):

Dig into the material for volunteers, and you'll find they are partnering with "Rock the Vote," a Hollywood effort to register young voters which has aligned itself with the Democrats since the start of the 1990s. In 2014, they ran celebrity ads touting how they would turn out for "marriage equality," "reproductive rights," and legalizing marijuana.

But Politico says both Obamas are nonpartisans now:

To the former first lady, though, the voter registration drive is the best way to take on a prominent role without engaging directly in electoral politics, which she has little affinity for. And it fits with a larger theory about political engagement that she shares with her husband: The more people who vote, they believe, the better it will be for Democrats overall. Obama will hit the campaign trail for candidates, but he also has been stressing nonpartisan engagement through his foundation.

USA Today picked up the Politico story without their silly "denialist" angle.