Former Newsweek correspondent Evan Thomas famously described Barack Obama on MSNBC as standing “above the world, he’s sort of God." In a Sunday New York Times book review of a new book by Donald Rumsfeld, he implies Rumsfeld is sort of Satan.

The book is titled When the Center Held, about the brief presidency of Gerald Ford. Thomas reached for John Bunyan’s 17th-century Christian allegory The Pilgrim’s Progress for metaphors about Ford:

Rumsfeld has written a kind of modern-day Pilgrim’s Progress about a good and godly man who enters the Slough of Despond (Washington, D.C.), is tried and tempted, but ascends to Celestial City with his virtue intact. That the narrator is a figure who has been likened in some quarters to Beelzebub makes the story more interesting, or at least curious.

Rumsfeld claims Ford pardoned Richard Nixon “without making any political calculations.” The mere notion of such a thing on a decision that fraught with drama strikes anyone inside the Beltway as bizarre. At least Thomas captured the “objective” media response:

“You’re not gonna believe it,” Carl Bernstein exclaimed to his fellow Nixon chaser at The Washington Post, Bob Woodward. “The son of a bitch pardoned the son of a bitch!” 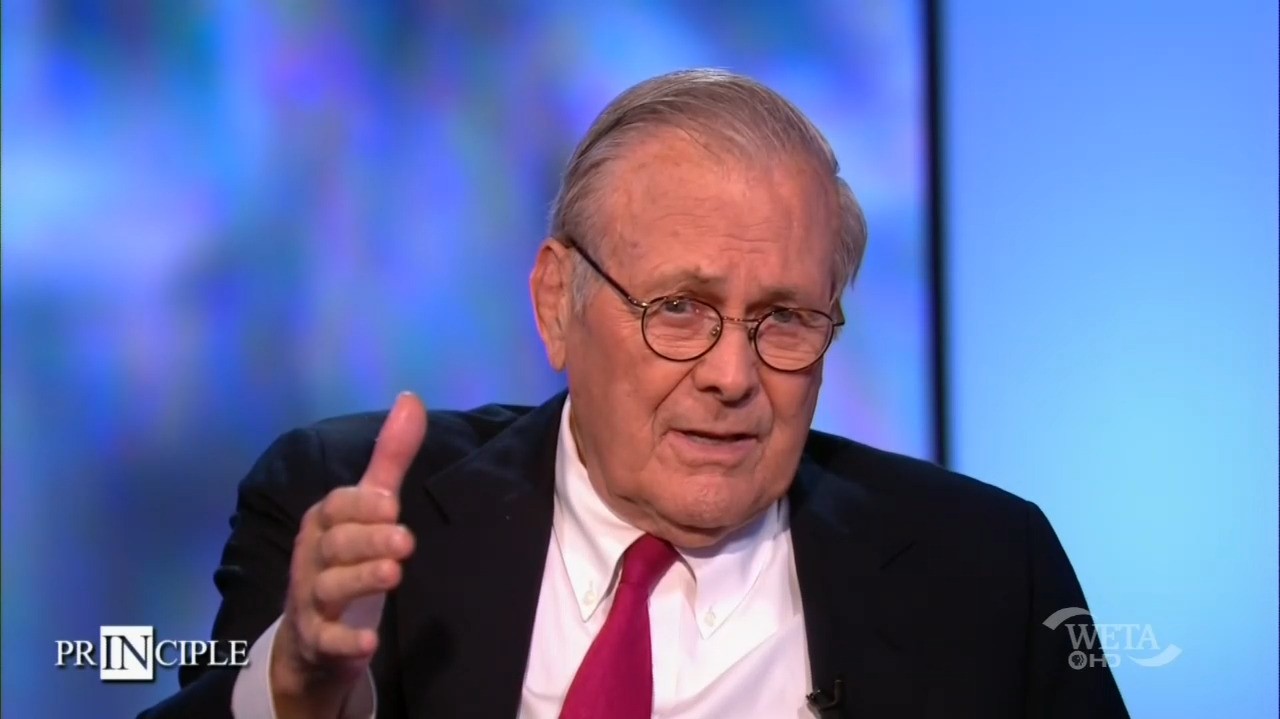 Thomas concluded “it would have been easy enough to cast the earnest, well-meaning Ford as a bit of a chump, but Rumsfeld portrays him as an honorable and brave man....With the help of his two longtime speechwriters, Matt Latimer and Keith Urbahn, Rumsfeld has produced a warm bath of a book. Readers may find it a little odd that Rumsfeld, that terror of bureaucrats in the George W. Bush administration, extols the virtues of Christian turn-the-other-cheek leadership. In his career, Rumsfeld’s true ideology seems to have been power — America’s and his own.”

He wrote Nixon decided Rumsfeld was too ambitious to “dismantle the war on poverty,” so he “dispatched him with an ambassadorship....As secretary of defense during the 2003 Iraq war, Rumsfeld steamrollered Bush’s national security adviser, Condoleezza Rice, and the secretary of state, Colin Powell.”

Thomas wonders why Rumsfeld would pen a valentine to Ford now? As if no one could figure that a book on a centrist Republican might hit some nostalgic notes among the elites as deliberative democracy is painted as withering? Thomas has to figure Rummy is digging himself out of that  “Beelzebub” trench:

What, besides a desire to warm up his image, moved Rumsfeld to tell the story of Gerald Ford’s beneficent 895 days? Perhaps, as he says in his author’s note, he wanted to show that “the Washington, D.C., of today is not entirely different from that of 1974.” Or, possibly, he has become nostalgic because Washington really was different a half century ago, when the Republican Party still had moderates and you could solve problems over a round of golf. In any case, he offers us a reassuring morality tale of virtue if not immediately rewarded, then ultimately redeemed.

Thomas doesn’t ask if you could say back in the Ford years, “the New York Times still had moderates”?