One nasty, if hardly unexpected result of the horrific mass shooting at the Annapolis Capital-Gazette newspaper is the attempt to smear it onto "anti-press sentiment." Liberals protest that they're not really accusing conservatives of shooting reporters, but they are, as usual, part of a "climate" of hatred.

Some people get it.

Some people never will.

One of those who gets it was the security guard in Denver who stopped Denver Post reporter Noelle Phillips on her way out of the building Thursday to say how upset he was about the massacre of journalists at the Capital Gazette newspaper in Annapolis.

“If you attack the press,” he told her, “you attack our democracy.”

The biggest Fake News that people like Sullivan are pushing is that the press equals democracy, and criticism of the media elite is anti-democracy.

Sullivan would not agree that Black Lives Matters smears on the police can be "connected" to cop shootings. Or that just because James Hodgkinson (the failed softball-field mass murderer of Republicans) liked Rachel Maddow on his Facebook page Maddow can somehow be "connected" to shooting congressmen. So this is a reckless tactic at a highly emotional time. 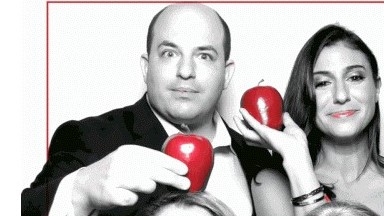 CNN's Brian Stelter highlighted Sullivan in his newsletter, and saluted her conclusion:

Trump can’t, and shouldn’t, be blamed for the Annapolis massacre.

But that doesn’t make his contempt for the press any less dangerous.

If contempt for the press is "dangerous," then why can't Sullivan and Stelter see that the rabid fear and loathing of President Trump might be "dangerous"? Why can't they imagine being on the wrong end of "If you attack the elected president, then you attack democracy"?

Instead, they just pound this same PR line about "anti-media sentiment" that could lead to violence, as a way of suggesting that "news busters" are inspiring violence. Stelter wrote:

On Twitter, I'm getting hit for pointing out, during our Thursday breaking news coverage, that there's been a sharp rise in threats against journalists in recent years. The verbal abuse was even worse than usual today... Which just reinforces why it's important to call out this dark strain of anti-media sentiment, apart from the attack in Annapolis...

CNN reporters have been fulminating against Trump's use of terms like "Fake News" and "enemy of the people" and Trump's "war on the press," suggesting they encourage violence. Stelter quoted Dan Shelley, director of the Radio Television Digital News Association: "Watch your backs, but don’t back down..."

No journalist in America should fear violent reprisals for reporting the news. But calling the media "fake" is not a threat. It's just as much a part of democracy or free-speech as the left-wing diatribes they uncork in the national media, and then call themselves "news" people.