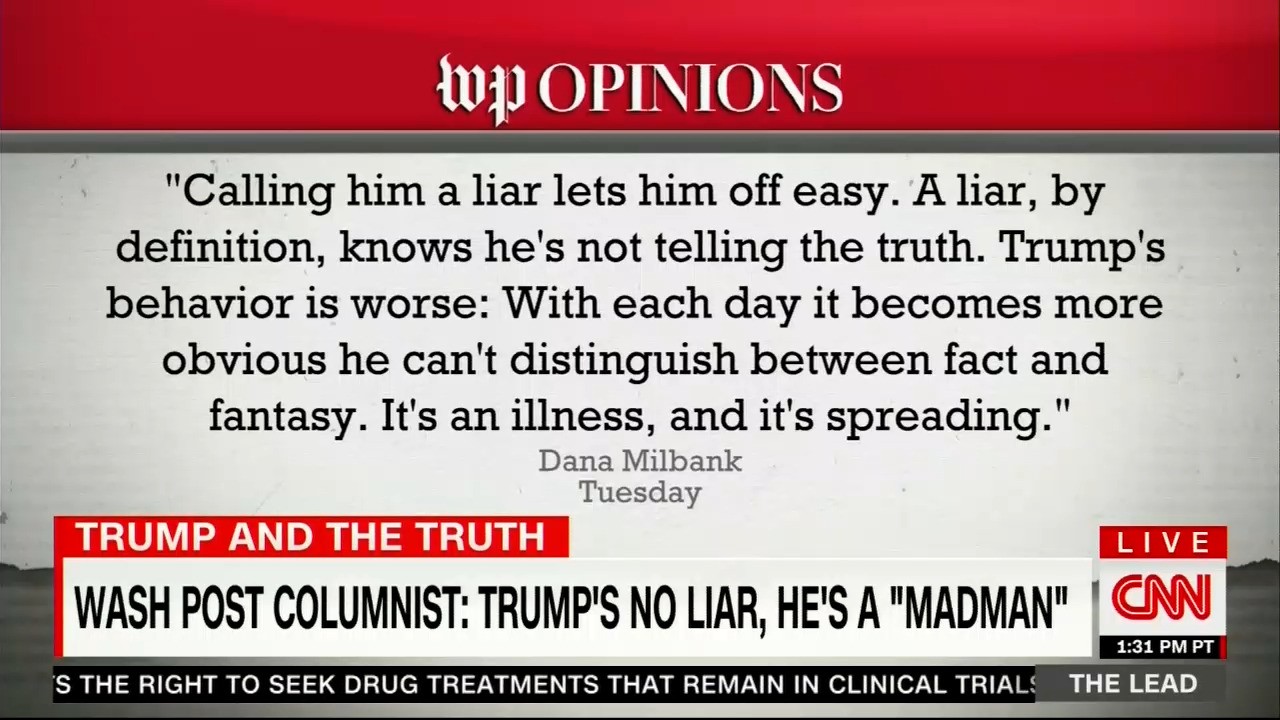 CNN anchor Jake Tapper is demonstrating an affinity for Washington Post columnists bashing the Trump-Pence ticket. On May 10, Tapper helped promote George Will ripping Vice President Pence as “horrifying.” The screen said “CONSERVATIVE COLUMNIST: PENCE HAS CHOSEN TO BE ‘HORRIFYING.’”

On Wednesday, he wanted everyone to see Dana Milbank’s column insisting the president of the United States is a “madman.” This allowed CNN to put a graphic on screen for all its airport customers, reading “WASH POST COLUMNIST: TRUMP’S NO LIAR, HE’S A ‘MADMAN’.”

Milbank concluded the column: “Go ahead and say he’s lying, if you think so. To me, his facility with fallacy and his pain-free fibbery aren’t symptomatic of a liar but a madman."

Tapper promoted the segment before a commercial break: “President Trump can insist that down is up and up is down and really seem to believe it. Does that make him a liar, a fibber? A boaster? Or something else entirely? Stay with us.”

After fact-checking the president’s latest speech, Tapper turned to the utterly unverified opinion part of the segment:

JAKE TAPPER: In a new column, The Washington Post's Dana Milbank, goes so far as to write of President Trump -- quote -- "Calling him a liar lets him off easy. A liar, by definition, knows he's not telling the truth. Trump's behavior is worse. With each day, it becomes more obvious he can't distinguish between fact and fantasy. It's an illness," Milbank writes, "and it's spreading" -- unquote.

Let's discuss with Dana Milbank from The Washington Post, who now joins our panel. Dana, you're obviously not a doctor and yet here you are diagnosing illness here. Did you go a little too far maybe?

“A little too far maybe?” Tapper worked at ABC News in 2005, and his team ripped Republicans then for trying to intervene with medical opinions in the Terri Schiavo feeding-tube case (the husband succeeded in getting her feeding tube removed). Jake Tapper devoted a whole piece to how "members of Congress made claims contradicting experts in medicine and bio-ethics." He concluded with this blast: "Terri Schiavo and her family deserved better than the way Congress worked this week."

But Not a Doctor Milbank gets CNN air time to intervene with his impressive lack of medical expertise in the Trump is a Madman case:

DANA MILBANK: Well, I'm not a doctor, but I do occasionally play one in the newspaper. But, no, look, I was doing a colloquial comparison, saying -- and using the madman characterization. That's not something you find in the DSM. You wouldn't get reimbursed for it if your doctor put it on your prescription form.

What you can say is, looking at the situation, what's going on here? And the clips you just played are certain things, well, you can quibble, you can argue, but the president is often saying all kinds of things that are very easily -- to disprove. He will say it was really sunny when it was raining out. He'll say that his net worth is affected by how he's feeling, like it goes higher or lower depending on how he feels about it.

I'm sure Tapper would say he's absolved of bias by turning to pro-Trump analyst David Urban for rebuttal: "Dana Milbank calls President Trump a madman in this article. I suspect you disagree." And he did.

If Tapper brought on a columnist who argued Obama was a Muslim, it's not a defense to say "I didn't promote the article, we just had a discussion." Tapper and CNN gave the notion that Trump as a "madman" the patina of "mainstream media" respectability....or he continued to ruin the idea that the national media is "mainstream."