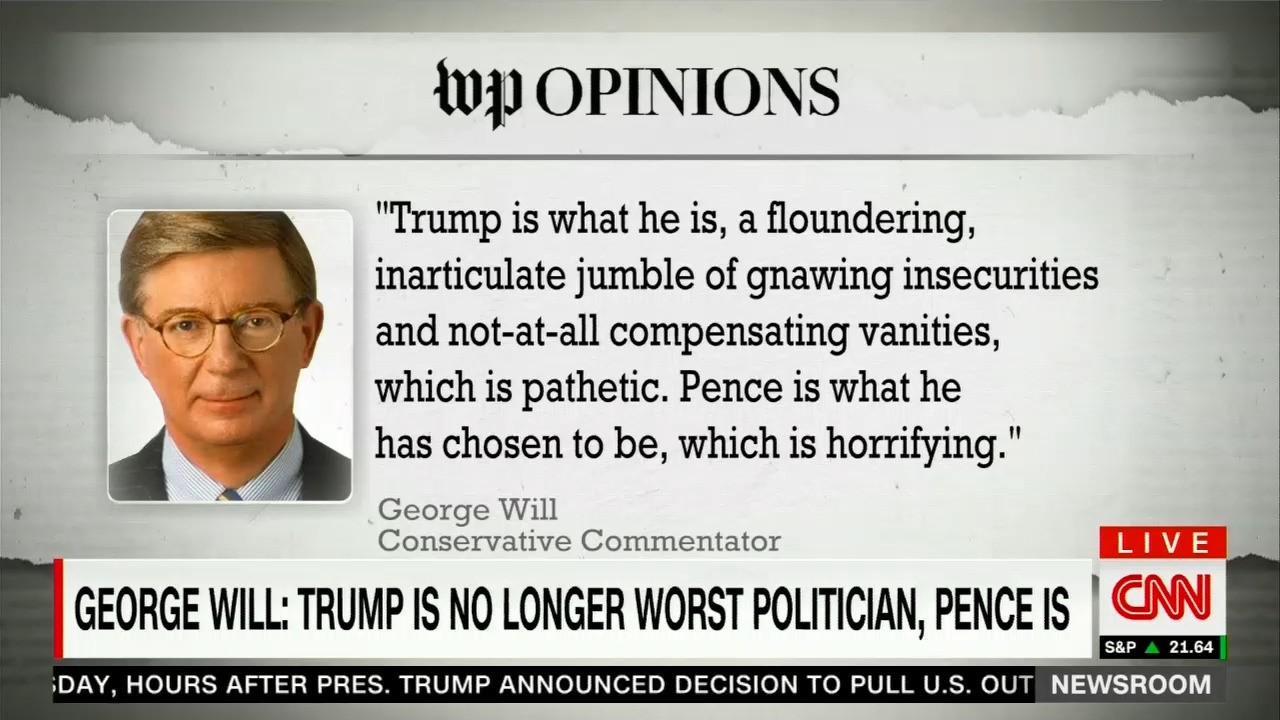 CNN doesn’t usually air clippings of nationally syndicated columnists during the regular news day, but they just had to make an exception on Thursday for Washington Post columnist George Will’s nasty attack on Vice President Pence. In the 3 pm hour, subsitute anchor Brianna Keilar brought on Jake Tapper to savor the "merciless" and "brutal" Will column.

First, they quoted: “Trump is what he is, a floundering, inarticulate jumble of gnawing insecurities and not-at-all compensating vanities, which is pathetic. Pence is what he has chosen to be, which is horrifying.”

Then, they added: “Because his is the authentic voice of today’s lickspittle Republican Party, he clarifies this year’s elections: Vote Republican to ratify groveling as governing.”

These quotes were on-screen, along with chyrons that announced in every airport: “GEORGE WILL: TRUMP IS NO LONGER WORST POLITICIAN, PENCE IS” and “CONSERVATIVE COLUMNIST: PENCE HAS CHOSEN TO BE ‘HORRIFYING.’” (MRC's Curtis Houck reported that CNN also hit this in the 2 pm and 5 pm hours, or four hours in a row.)

Keilar then augmented the theme with a series of clips of Pence gushing over Trump: "Pence often expresses his adoration for the president on camera and an unusual appreciation for his broad shoulders."

KEILAR: So, when you read this op-ed by George Will...

KEILAR: It's something. And you can just see by those excerpts that we put there. What's your reaction to it?

You want to be supportive, but you don't want to lose yourself. You don't want to become obsequious. You don't want to say things that normally you wouldn't believe. There have been people who have been able to achieve it. Ambassador Nikki Haley, Secretary of Defense Mattis, former National Security Adviser McMaster, and on and on. Vice President Pence is serving the traditional vice presidential roll by being rather complimentary of the president and his physique. 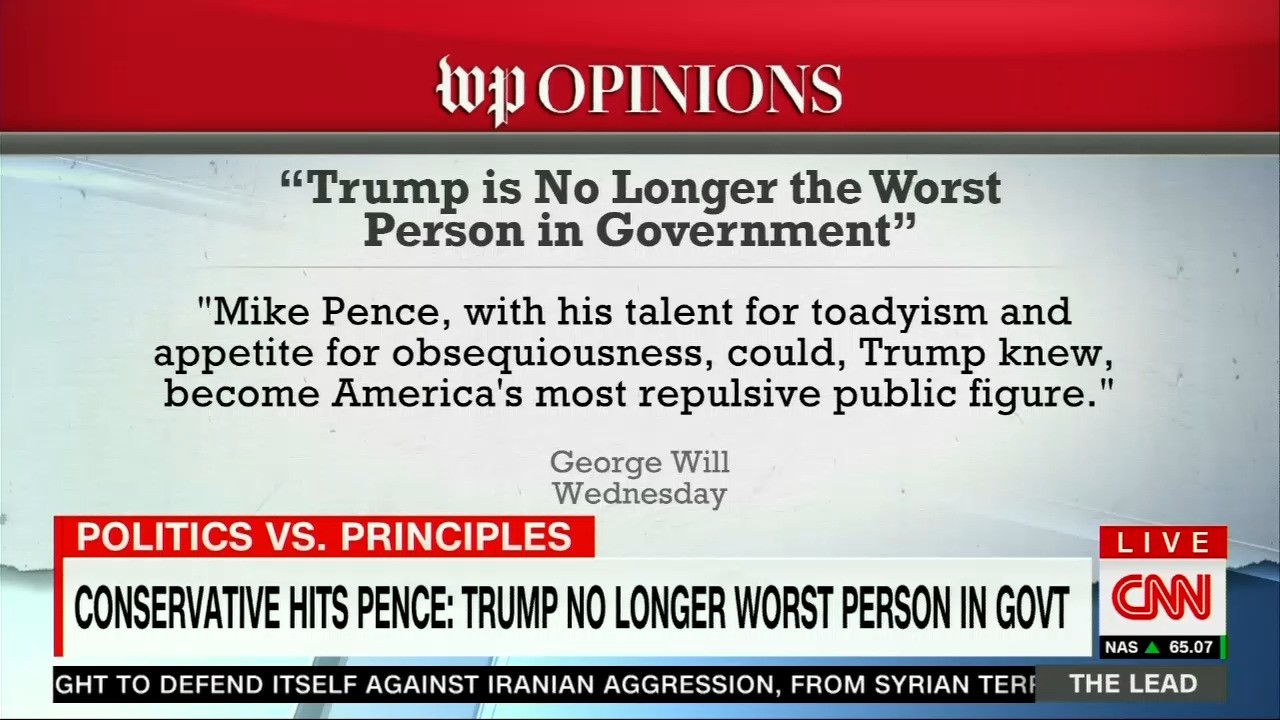 Tapper put a different quote on screen in the 4 pm hour, including the headline “Trump Is No Longer the Worst Person in Government” and the line “Mike Pence, with his talent for toadyism and appetite for obsequiousness, could, Trump knew, become America’s most repulsive public figure.”

Tapper at least noted that flattering presidents is what vice presidents do. So why didn’t CNN explore whether George Will wrote a column like this about oh, Vice President Biden? Here’s what they would find: “conservative” Will has never written a critical column about Biden over the last ten years. In fact, he’s never written about Biden at all in that period.

This raises a different question, as Tapper protested he wouldn’t read this column if Will wasn’t a “conservative.” Has anti-“lickspittle” George Will ever written a column criticizing his bosses at The Washington Post? Or any of his TV-network paymasters over the years? Good luck finding one.

On April 23, 2014, Will did write a column on "Barack Obama, the adolescent president." No one at CNN noticed it.

PS: In a field of happy "mainstream" network videos under the YouTube search term "Obama-Biden bromance," CNN promoted how "sympatico" Biden and Obama were around the second inauguration in 2013: