On Thursday, NBC Today co-host Savannah Guthrie grilled Uber CEO Dara Khosrowshawi about his company's culture of sex harassment before he was hired, which she described as an "Animal House" environment. The Uber boss was too polite to suggest that Matt Lauer's team was probably not the ideal set of prosecutors on a hostile work environment.

SAVANNAH GUTHRIE: Let's talk about the culture at Uber. We saw in the piece there was an Uber engineer who said it was shot through with sexual harassment. This is before your time, in fairness. There was a report that was done, an independent report, and according to The New Yorker, it read like something out of Animal House, the way the culture was at Uber. Is it different now? Have you been able to rid the company of the last vestiges of that?

DARA KHOSROWSHAHI: I will tell you that it's night and day. I sat down on my first day and I read that report, and it was tough reading. But the folks who are at the company now are determined to change, have changed, and I think there's a saying. Never let a good crisis go to waste, and we haven't.

One of the first things that we did as a leadership team is to change our company’s fundamental culture. We always do the right thing now, and that includes how we treat our employees internally, holding people accountable, as well as our partners such as the driver partners in the cities in which we operate.

On the morning NBC announced Lauer’s firing, Guthrie professed that she knew nothing, and she’s still claiming that in a new Hollywood Reporter story. She is shameless enough to say this when asked about male-female flirtiness on set:

GUTHRIE: Plus we've all worked together for a while now. We're all married, we're all pretty boring and there's a presumption of good faith, you know? There are no creeps. 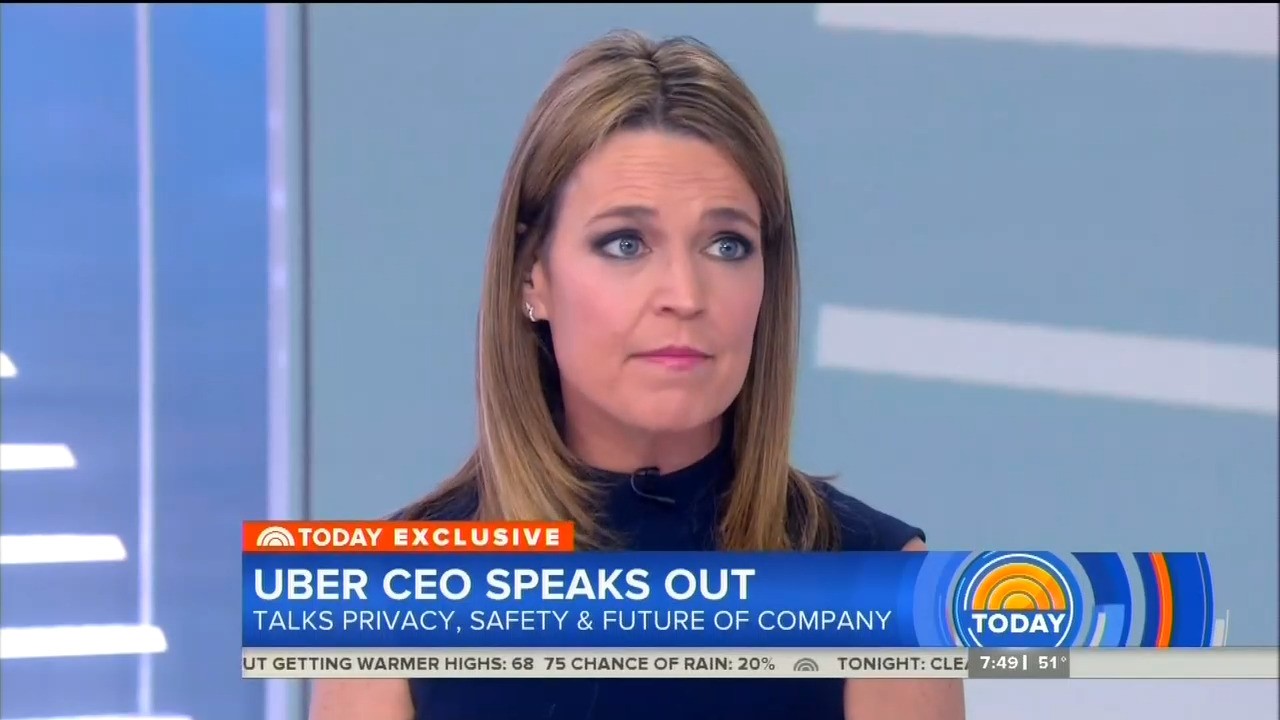 Let’s put cynicism aside for a second and assume that Guthrie's claim of ignorance is true. If so, should we really trust these people as having a “nose for news”? If they’re this clueless about their own office, how can we imagine they’re on top of other news stories?

Lauer and Guthrie were said to be extremely close. Lauer hailed her at a 2017 awards show as someone “Who you can always count on to have your back."

Sarah Ellison at Vanity Fair exemplified the more cynical line last year, quoting anonymous NBC insiders: if Lauer's preferred mode of infidelity was inside the office, how aren't they hearing rumors....not to mention rumors about other media outlets working up Lauer exposes?

“So I think the only place he could really operate was in his office and then when he was on the road. And there was a lot of him bringing attractive young women into his office for counseling and where he would talk to them about their career.” The Variety story about Lauer’s sexual misconduct, published Wednesday, based on the accounts of more than 10 current and former employees, reports that he could lock the door to his office from his desk.

There were, according to the former colleague, two groups of women that Lauer seemed to focus his attention on: interns, pages, and production assistants in charge of running scripts in the morning; and also bookers....

“I don’t know what everyone is so surprised by,” said one high-level industry source. “This has been going on for months and months and everybody knew it and it was just going to be which girl came forward, and who reported it first.”