Trump expressed himself on April 1, 2018: "Border Patrol Agents are not allowed to properly do their job at the Border because of ridiculous liberal (Democrat) laws like Catch & Release. Getting more dangerous. ‘Caravans’ coming. Republicans must go to Nuclear Option to pass tough laws NOW. NO MORE DACA DEAL!"

W. Gardner Selby of PolitiFact judged Trump as “Half True” for the snippet “’Caravans’ coming.” In part because only one caravan was coming:

CNN reported April 1, 2018: "Trump appears to be referring to a migrant caravan assembled by the group Pueblo Sin Fronteras (People without Borders), which was discussed on Fox News' Fox & Friends shortly before he published his tweet….

Buzzfeed reported that according to organizers, about two-thirds of people are planning on crossing into the U.S. "undetected or asking for some type of protection like asylum."

That's not what we heard from Irineo Mujica Arzate, a Pueblos Sin Fronteras press contact who told us he was speaking to us from the caravan itself.

Arzate said in a phone interview April 2, 2018 that the group helped organize two caravans in 2017 but, he said, there’s only the existing caravan planned for 2018.

So PolitiFact proclaimed its verdict:

President Trump tweeted that caravans of immigrants are coming to the Mexico-U.S. border.

We confirmed that a caravan of 1,200 to 1,500 people from Central America--not caravans--was in southern Mexico, about 900 miles from the Rio Grande, when Trump tweeted. Also, accounts vary on whether all participants are bound to enter the U.S. An organizer estimated that most of the people intend to remain in Mexico.

On balance, we rate this claim Half True.

Trump's brief tweet shouldn't have to say "'Caravans' coming each year" to be recognized as factual. Multiple caravans have been launched at the U.S. border. 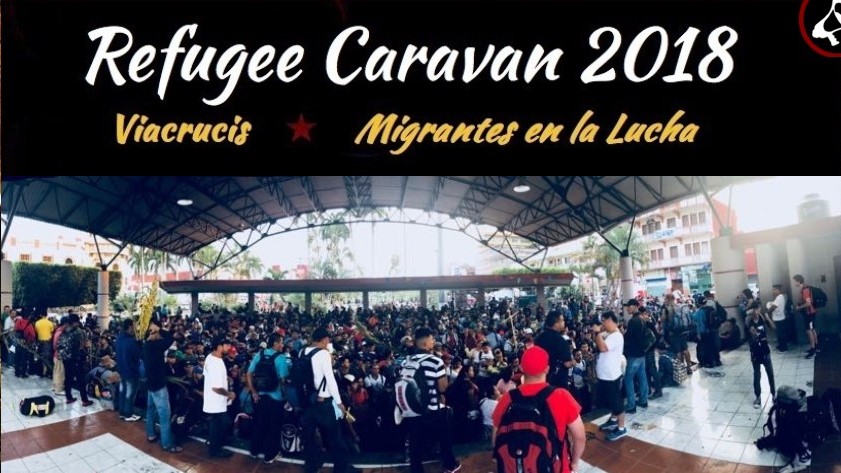 The liberals who are PolitiFact's main tipsters were alarmed that Trump would have a factual basis to build "hate" around a mass of people who refuse to recognize borders. Their website explains their radical aims:

We are a collective of friends who decided to be in permanent solidarity with displaced peoples.

We accompany migrants and refugees in their journey of hope, and together demand our human rights.

We provide humanitarian aid to migrants and refugees on the move.

Our dream is to build solidarity bridges among peoples and turndown border walls imposed by greed.

The group recognized that this large caravan was dreadful PR, as President Trump called the National Guard to the border, so they started claiming to the "fact checking" liberals: "Hey, we're not ALL coming."

PS: The Arizona Republic underlined the "haters" were winning:

Now organizers are left to wonder whether one of their main objectives — to draw attention to the conditions in Central America that force people to leave their countries — may have backfired.

"I don't feel bad about the caravan," Mensing said. "I do feel upset about the National Guard, definitely."

Organizers now are evaluating whether to organize caravans in the future, not because of the National Guard but out of concern that the military response from the U.S. may embolden anti-immigrant hate groups, he said.

That's when PolitiFact often gets involved in chipping away at Fox News stories: when Trump and his voters are "emboldened."