CNN International host Christiane Amanpour -- whose show is simulcast now on PBS stations -- lit into "homophobia" in the Catholic Church and all "Abrahamic faiths" in her Tuesday show. Her guest was Father James Martin, a controversial figure whose book is touted for showing "how the Rosary and the rainbow flag can peacefully meet one another."

First, Amanpour and Fr. Martin discussed how Pope Francis is being attacked for being weak on clerical sex abuse -- an odd topic considering Amanpour is airing on PBS due to Charlie Rose's "crusty paw" sex abuses. Then she turned to the "massive tsunami" of traditionalists raging against the "compassionate."

AMANPOUR: So, let's turn to your personal situation because you yourself have come across and come really almost to blows, verbally anyway, with the traditionalists in the church. You've written this book, Building a Bridge: How the Catholic Church and the LGBT Community Can Enter into a Relationship of Respect, Compassion, and Sensitivity. You were due to give a talk in New Jersey. Tell me what happened.

MARTIN: It was moved off of church grounds because of protests from what I would call online hate groups. And that's not the first time it has happened. This is a one in a series of talks that has been canceled. Ironically, the talk was on Jesus.

AMANPOUR: So, give us a little bit more, you know, context to this. Just what is it? Is it sort of traditionalist ginning up protests? Do you feel like the majority of Catholic churchgoers don't feel compassionate?

MARTIN: Oh, I think the majority of Catholic churchgoers are very compassionate towards LGBT people. Many of them have them in their families. They are in their parishes. They're part of the church already. I think you have people who are terrified with the idea that LGBT people are part of the church. And that's the kind of a sort of very small traditionalist mindset that really is ginning up the opposition. And there is a lot of hatred and homophobia in the church. And we really need to confront that.

The "online hate group" mentioned in news accounts, was the American Society for the Defense of Tradition, Family and Property, which posted a shocking article titled "7 Ways Father James Martin Is Harming the Catholic Faith." CNN and PBS have no room for their counterpoint. They squash it even as they mock conservatives for "not listening."

Like a good liberal, Amanpour thought it was only fair to note "all the Abrahamic faiths" don't "believe in LGBT rights." 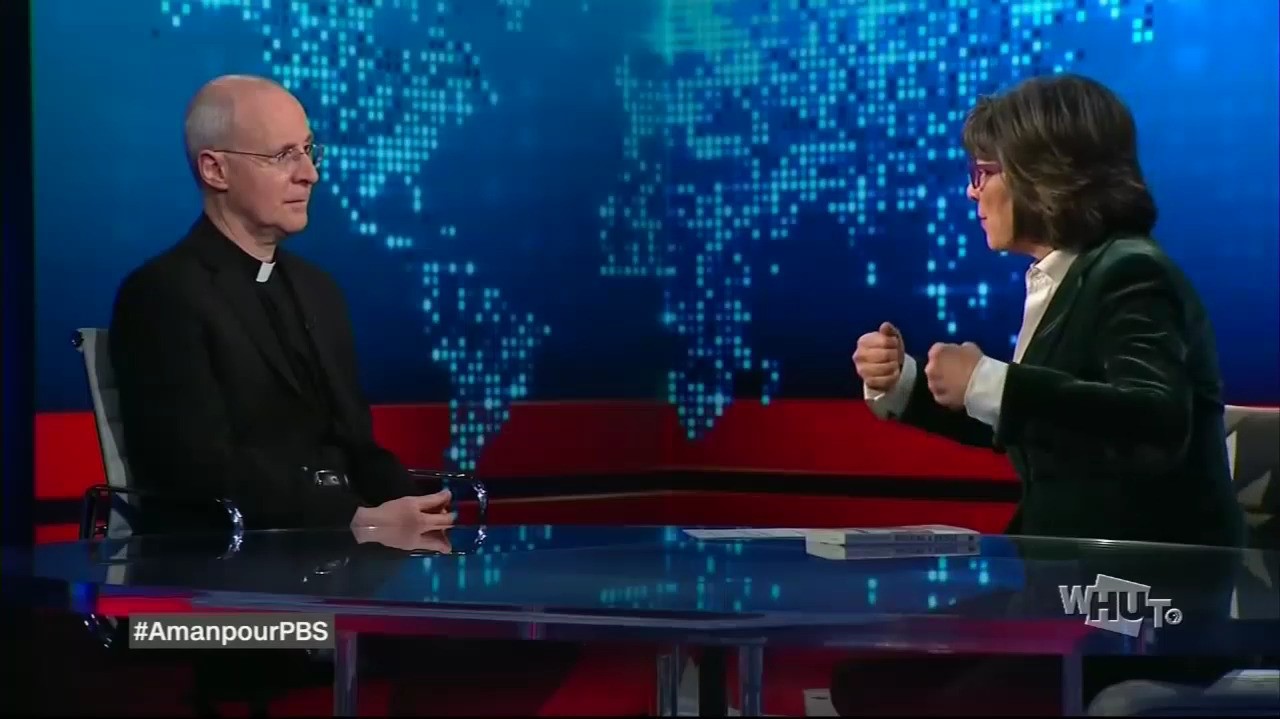 AMANPOUR: And let's not forget, it's actually across religions. I mean, many of the major established - all the Abrahamic faiths anyway have a real area that just don't believe in LGBT rights.

MARTIN: Well, I think that's true. And also, I think in this country, unfortunately, it's OK to hate again, and it's OK to do personal vilification and slander and lies and things like that. And you see this on these sites and that's what happens. And I have been the victim of that unfortunately, but more and more victimized are the LGBT people.

AMANPOUR: Right. And you refuse to be victimized. You just went and had your talk somewhere else. But they did run you off that particular piece of property.

Fr. Martin stuck to his line that traditionalists can't "listen" like Jesus to gay activists. Amanpour then replayed an old snippet of Pope Francis being asked about gays seeking an encounter with the church, where he said "If a person is gay and seeks God and has good will, who am I to judge him?"

AMANPOUR: Well, as somebody said, the five words that shook the world and shook the Catholic Church, but he is, obviously, facing a massive tsunami from the traditionalist wing.

MARTIN: He is. I mean, the five words, who am I to judge, which initially was related to gay priests and someone pushed him the next day and he said now it's gay everybody, basically. He said to a friend of mine, homophobia has no place in my ministry. But a lot of the traditionalists think it's their place to judge. But, again, Jesus tells us, judge not. And so, it's very hard for me to sort of understand why people would have such a big problem with just listening to people.

This is the same misleading salesmanship that secular-media outlets push. The leftists are not for repealing the Bible. They're for "listening to people," like Jesus.