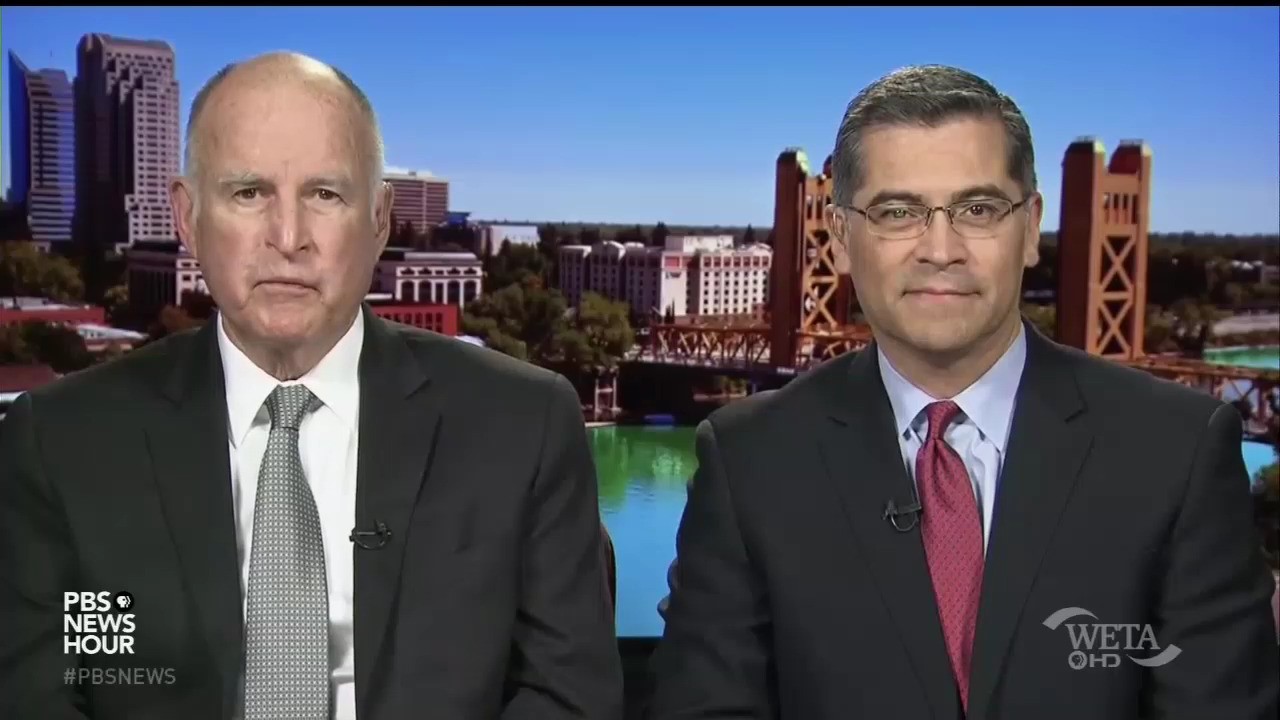 Attorney General Jeff Sessions is suing the state of California for its state immigration laws. The PBS NewsHour gave California’s top Democrats almost nine minutes on Wednesday night to attack President Trump and Attorney General Jeff Sessions as liars in a “cesspool of mendacity,” suggesting Sessions was an "authoritarian" using “Gestapo” tactics. Woodruff didn’t protest at any moment in this set of attacks that Brown was too uncivil for the taxpayer-subsidized network.

In an interview last September, NewsHour executive producer Sara Just boasted “We aim for more light than heat,” and “We’re not trying to set up a false sense of combativeness." To borrow from Orwell, this was a Nine Minutes Hate.

Woodruff began with Gov. Jerry Brown: “The Trump administration is saying basically that the state of California is protecting lawbreakers. Is that what you’re doing?” Brown said “No. That’s absolutely untrue,” and that Sessions is  “going after men, women, and children, some who have worked 10 or 20 years picking our food, washing our dishes, building houses. And, yes, we need an immigration reform for the whole nation. We don’t need a Gestapo-kind of tactic with vitriol spewing out of Jeff Sessions’ mouth.” Woodruff didn’t even blink at the Gestapo reference.

She turned to the state’s Attorney General, Xavier Becerra. “I’m just going to read something that Attorney General Sessions said in California today, in your state. He sald ‘I can’t sit idly by when the lawful authority of federal officers is being blocked by legislative acts’ of politicians in your state.”

Becerra protested: “That’s not true. As the governor said, we don’t block it. We allow the federal government to do immigration enforcement, because that’s their role. That’s their province. We don’t get in the way.” What? PBS could use a fact-checker on this one. Power Line provides context.

Woodruff turned back to Brown and quoted Sessions again. “‘The good people of this country are right to insist that we end — that we create a rational immigration flow and protect the country from criminal aliens.’ He is focused on people who he says are breaking the law who he says your state, again, is protecting.”

Brown jumped back into hyperbole:

BROWN: That is a lie. I’m choosing my words very carefully. The law explicitly recognizes the supremacy of federal law. We have explicit statutes of cooperation. We don’t want to protect any criminals. But we do want to make sure we are a country of law and order, and not some kind of authoritarian coming out here for a 10-minute speech, and then running back to Washington, and then sending it out through the Trump campaign political wire.

He demanded that Trump and Sessions “act like Americans, act like the good Christians they claim to be, and work with us to get a good immigration law, and not to try to just hyperbolically scare the hell out of people.”

Later, he added: "Look, the Trump people have a record — I think it’s — what is it — 1,114 lies and misrepresentations coming out of the White House. Sessions is in a cesspool of deception and mendacity."

Woodruff failed to ask Brown and Sessions about Californians dying at the hands of illegal immigrants, like Jamiel Shaw or Kate Steinle. But a quick Nexis search shows the PBS NewsHour never cared to cover those crimes when they occurred. The names came up in PBS coverage when Republicans cited them at the 2016 Republican convention. PBS finally aired a single segment on the trial of Steinle's killer on December 1, 2017.