The liberal media's current infatuation with teenage activists ripping into the National Rifle Association extends to letting them smear gun-rights activists with no correction. This presents a serious issue for tonight's CNN "Students Demand Action" town hall meeting. Are the teenagers going to be able to say anything without a check on their facts or their civility?

There is nothing wrong with teenaged activists speaking out. But if we're teaching these students how to engage in politics, then we should teach them they will be held accountable for their words, and they should expect to be criticized from an opposing point of view. Instead, the networks are putting these kids in a bubble where they can accuse their opponents of murder. That's not a debate, and it's certainly not civil.

On Monday morning, CNN anchor Alisyn Camerota took no exception to activist David Hogg insisting the NRA were "child murderers." Where are the Fact Checkers? Camerota was throwing softballs at Hogg and fellow activist Emma Gonzalez, such as "Guys, tell me what's going to happen March 24th with your plan for a big March on Washington. What's your vision?" Then she brought up the NRA:

ALISYN CAMEROTA: So what do you say to the NRA?

EMMA GONZALEZ: Um...Disband, dismantle. [So much for democracy...]

DAVID HOGG: And don't make another organization under a different name.

GONZALEZ: And, yes, don't make another organization under a different name. Don't you dare come back here. The fact that you were in power for so long and that you had so much influence for so long in America just goes to show how much time and effort we still need to spend on fixing our country.

CAMEROTA: Look, I don't have to tell you guys, they -- that they give millions of dollars to politicians.

CAMEROTA: They have a very powerful tool. So, I mean, how do you expect politicians, who need money to keep running for office to say no to the NRA?

GONZALEZ: Because we keep telling them that if they accept this blood money, they are against the children. They are against the people who are dying. And that is -- that -- there's no other way to put it at this point. You're either funding the killers or you're standing with the children. The children who have no money. We don't have jobs, so we can't pay for your campaign. We would hope that you have the decent morality to support us at this point.

HOGG: And not take money from people that want to keep lessening gun legislation and making it even easier for these horrifying people to get guns, because if you can't get elected without taking money from child murderers, why are you running?

They said they would be in school....if they didn't have interviews with news outlets. Then Camerota praised Hogg for being so vocal and strong: "David, people remember when we first interviewed you and you were so vocal and so strong. How are you guys doing emotionally? I know you are galvanized by this but emotionally, how are you?"

It's not like CNN didn't hear Hogg's smear. CNN.com promoted that wild-eyed claim as a headline on its video page, as in "Check out this hot take!" 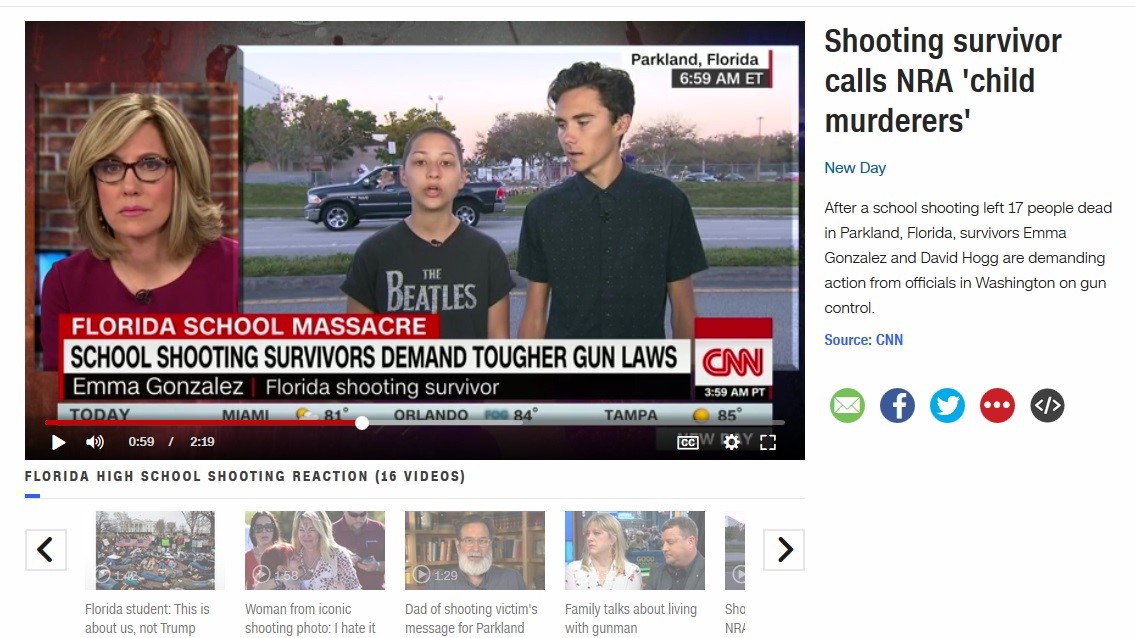 Later that morning on HLN, anchor Carol Costello took the smear and underlined it, wallowed in it with some actual facts about Trump's support in 2016 from the NRA and video of his attendance at their leadership meeting:

HOGG: ...if you can't get elected without taking money from child murderers, why are you running?

CAROL COSTELLO, sounding impressed: Whoa! President Trump benefitted greatly from NRA funds. Here he is with NRA leadership at the 2016 annual meeting. The group spent more than $31 million on his campaign and to oppose Hillary Clinton.  And the backlash is building among students across the country. Today, for instance, students from the D.C. Area are planning a lie-in. Seventeen7 teenagers will lie down outside of the White House for three minutes to symbolize how long they say it took for shooter suspect Nikolas Cruz to buy that assault style weapon.