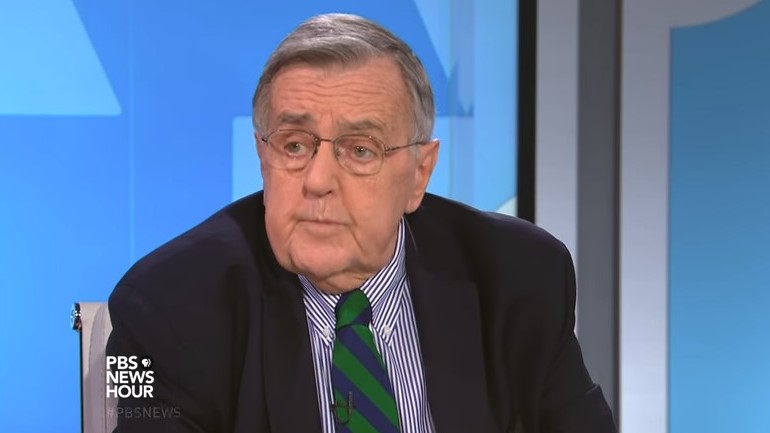 On Friday's weekly roundup on the PBS Newshour, after analyst David Brooks said the Trump White House has a "perpetual unraveling" of staff, liberal analyst Mark Shields compared it to people trying to escape the Berlin Wall, where escapees were often killed by communist guards. "This White House is resembling nothing as much as East Berlin, in that there's more people trying to get out than there are trying to get in."

The subject was the resignation of White House staff secretary after two ex-wives accused him of domestic abuse. Brooks took a shot at chief of staff John Kelly: "We have learned a couple things about Kelly.He had the earlier comment that some of the DACA people ["Dreamers"] were lazy. And then he — but the guy who allegedly beats his wife is honorable. I mean, that’s a contrast." He added "there’s just always this thing of perpetual unraveling and the cycling through of staff at this White House."

MARK SHIELDS: Judy, increasingly, from my reporting and everything I learn, this White House is resembling nothing as much as East Berlin, in that there’s more people trying to get out than there are trying to get in.

And it’s not — they have not been able to, either based on their false sense of loyalty that one had to have been a total Trumpite from the begin, whatever, they have not been able to attract and hold a talented administrative staff. The one saving argument for John Kelly is that Rob Porter was the exception. He was able. He was the de facto deputy chief of staff that Kelly did not have. I think it’s fair to say that Kelly’s judgment has been seriously called into question here.

DAVID BROOKS: It’s about just being a gentleman. The MeToo movement, everything we have seen over the last six months, it’s, are men — do they know what it’s like to be a gentleman and just behave decently like a gentleman?

If you look through the history of our political leaders, Teddy Roosevelt, Barack Obama, Mitt Romney, they were gentlemen. It’s not hard. And yet those once — you lose the social standards of how a man is supposed to behave, you have got a lot of bad stuff that comes out.

Do these people really think everyone forgets that Bill Clinton was accused of pants-dropping sexual harassment and even rape? Few might remember the PBS NewsHour quickly came out and criticized the media when the Monica Lewinsky scandal broke out.

These comments came at the end of the segment, ten minutes in: