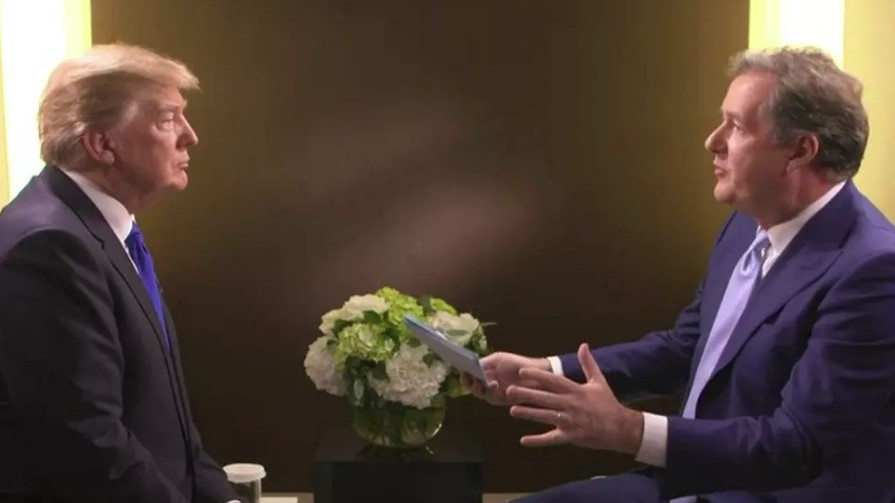 Former CNN host Piers Morgan just gained an interview with President Trump for his current gig on ITV's Good Morning Britain. But someone thought Morgan was too soft on the president. Morgan launched a blistering on the BBC after it aired a 'homophobic' cartoon depicting the British journalist with his nose up President Trump's naked rump, with the presidential pants down to his knees.

Morgan slammed the government broadcaster for using the image Thursday on BBC2's satirical news show The Mash Report. Morgan reacted on Twitter after it appeared on Thursday. The Evening Standard reported he accused the BBC of double standards.

"Amusing though this image may be to many people, can you imagine the BBC broadcasting it if the President was Hillary Clinton or the interviewer was a woman?

"The BBC thinks this is OK to broadcast. But if it depicted high profile women, there would be outrage. Why the double standard?

"If Trump tweeted an image like this depicting Hillary Clinton & a female interviewer, all those currently celebrating/retweeting it would erupt with outraged cries of 'Sexist!' 'Misogynist!' 'Homophobic!' - led by the BBC.  Liberal hypocrisy in all its unedifying glory!"

The BBC responded without apology, and without any denial of a double standard. "The BBC has a rich heritage of satire and The Mash Report takes a satirical and surreal look at the weeks big stories. This brand of humour is well known to BBC Two audiences who tune in to watch the programme."

The Trump-despising network CNN registered their glee. CNN's Bill Weir -- the same "reporter" who said "even the seagulls" celebrated Barack Obama's inauguration in 2009 -- tweeted about his "genuine belly laugh" at the gross cartoon: 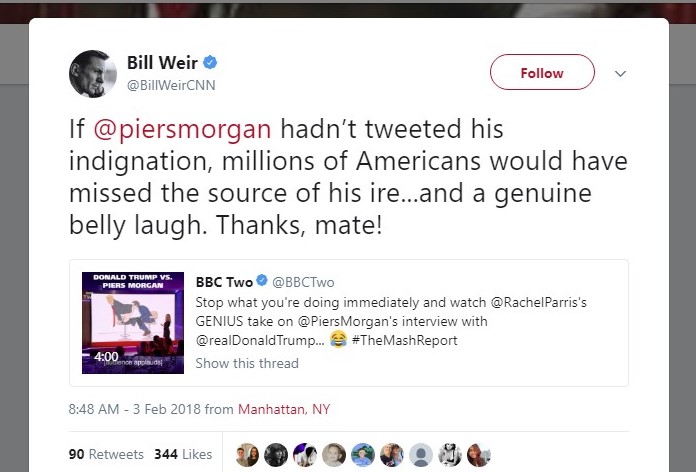 Morgan replied: "Chortle away, Mr Weir. I'm not angry, but CNN wouldn't have aired it & nor should the BBC." Can we imagine how CNN would have reacted if Fox ran a cartoon with Fareed Zakaria brown-nosing Barack Obama like this? Harmless satire?

Weir added an insult: "Oh, c’mon. It’s nice to get SOMETHING of value out of a rare sit-down with the most consequential human alive. (And it’s OK to be angry. Harness it in case he ever gives you a do-over)".