Washington Post media columnist Margaret Sullivan unleashed a personal attack on Fox News host Howard Kurtz in a Sunday book review at the most transparent “Pot, meet kettle” level of criticism. She attacked Kurtz as an insincere creature of Fox News and as a tool of White House adviser Kellyanne Conway. Dear Margaret: Has your column ever boldly attacked The Washington Post, or strayed from its everyday spin?

Carlson’s opener is laughable, claiming there is no such thing as the media warring on President Trump. The aggression is apparently all coming from Trump:

Howard Kurtz’s book Media Madness is fast-moving and lively, but it’s based on a false premise: that President Trump and the national press are at war with each other....I don’t buy it, and I suspect that Kurtz — a seasoned newsman who spent decades at The Washington Post — knows it’s not true. 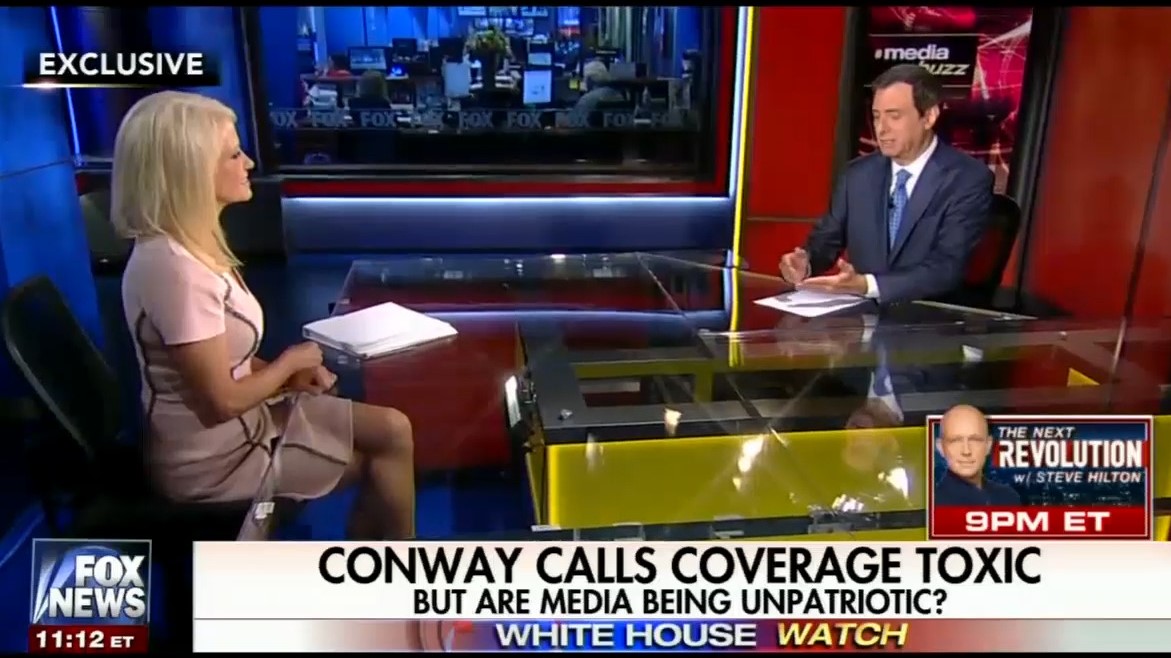 She writes “Kurtz’s allegiance to his masters at Fox News is evident right from the start, when he offers something I never thought possible: a heartfelt defense of Kellyanne Conway’s coining of the infamous phrase ‘alternative facts’...He takes Conway’s side (as he does so often and so sympathetically that you may be tempetted to look for a Conway co-author’s credit)....”

The headline on B-5 of the Sunday Outlook section even bluntly accuses “Did Kellyanne Conway ghostwrite this book?”

If she hadn’t kicked Kurtz in the shins enough, Sullivan repeats her thesis near the end: “Overall, you can best understand Media Madness by considering the source: Despite his long history in journalism, Kurtz is a creature of Fox News now, as the host of a show called Media Buzz.”

It’s a shocking personal attack on Kurtz, and self-refuting in that Margaret does it while at the same time kissing up to the man who hired her at The Washington Post, with the apparent task of defending the liberal media at their most aggressively liberal: “For the most part, though, they (the media) are trying to cover him, not take him down. (As Post editor Martin Baron put it, ‘We’re not at war. We’re at work.’)”

So a month into the Trump presidency, The Washington Post posts on their daily masthead the overwrought slogan “Democracy Dies in Darkness,” heavily implying the Trump is “Darkness” and they are the heroic warriors upholding  “Democracy.” But there’s no effort to defeat “Darkness.” Riiiiiiiight.

Liberals like Baron (and his admiring employee Margaret Sullivan) think journalism and liberalism are the same thing. Sullivan concluded: “Although Kurtz emphasizes he is a journalist, through and through, with printers’ ink running through his veins, Media Madness clearly is meant to reinforce Fox Nation’s disdain for legitimate journalists who are trying to hold a norm-busting president accountable.”

In his book, Kurtz offers an entirely different conclusion on who is busting norms: "A common refrain among Trump's antagonists in the press is that they must resist normalizing his presidency. But in the process, they have abnormalized journalism."