Apparently, bringing on fake conservative David Brooks on the PBS NewsHour on Friday night for a fake debate ("I agree with Mark Shields and the liberal consensus") isn't enough fun. On Monday night, NewsHour anchor Judy Woodruff interviewed former Bush aide Peter Wehner as the David Brooks Stand-In, and he made Brooks look mild-mannered. Not only is President Trump a racist, but so are his supporters, said the so-called “lifelong conservative.”

JUDY WOODRUFF: As a lifelong conservative, how are you interpreting what President Trump said? First of all, do you believe he used those words that he’s alleged to have used, and what do you take away from it?

PETER WEHNER:  Yes, I do believe that he used these words. I don’t think there is much question about it. Republicans like Lindsey Graham have confirmed that he used it. And this is all part of a piece with him. This is the latest link in a long, malicious chain for Donald Trump, a chain that’s connected by racist sentiments toward Mexicans, toward Muslims and toward African-Americans.

In terms of what it says about him and how I interpret it as a lifelong Republican, it’s extremely painful, it’s revealing. And what it says about Donald Trump and about Trump supporters is that they are racist or that they find great appeal in racist sentiments and expressions of racial division. You know, Donald Trump is appealing to the worst instincts of America and, unfortunately, his supporters are responding to it.

The liberal guest was Jelani Cobb of The New Yorker, who when Trump won, imagined we’d be headed back toward segregationism. Online, the PBS headline was “Jelani Cobb: ‘It’s impossible to avoid the conclusion that Donald Trump is racist’.”

WOODRUFF: Jelani Cobb, on this Martin Luther King Jr. Day, how are his words being received, and are we learning something new about him from this?

JELANI COBB: Yes, I don’t think we’re learning anything new. There seems to be a cycle in which we hear something outrageous, something inflammatory, something that is undeniably racist, and we say, at this point, it’s impossible to avoid the conclusion that Donald Trump is racist. 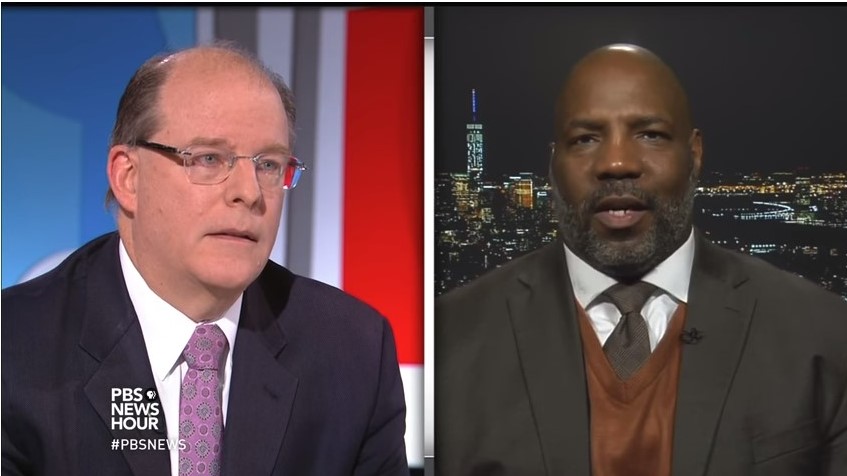 Wehner even claimed Trump was historically awful. He “seems to take great delight and takes great energy in dividing us by race....And in that area, Donald Trump is worse than we have ever had.”

Woodruff’s followup softball to Cobb was “Jelani Cobb, can one person, even if that one person is the president of the United States, literally set back race relations in this country?” He said “Absolutely.”

Woodruff turned back to the liberal and said "Jelani Cobb, what would you add to that? What is the message, what should the message be today for individual Americans right now?"

Wow, PBS sure knows how to challenge the liberal consensus with tough questions. Not.