PBS NewsHour anchor Judy Woodruff interviewed former vice president Joe Biden on Thursday night, and most of it consisted of please-attack-Trump softballs. Woodruff's most urgent pushback to Biden came on when he would be apologizing to Anita Hill for somehow mistreating her during the 1991 Hill-Thomas hearings. When Biden said he hadn't contacted Hill, Woodruff shot back "Do you plan to?"

This is odd, since the PBS anchor should spend some time on her show exploring the sexual harassment problems at PBS with Charlie Rose and Tavis Smiley. The rationale for this interview was to promote Biden's book about losing his son Beau to cancer, even though the book came out on November 14. Most journalists were interested in her questions about Biden running in 2020, and Biden playing down questions about his age by saying he could take Howard Dean in a fight.

The Anita Hill exchange came near the end:

WOODRUFF: We have watched this incredible MeToo movement. In connection with that, you have said that you owe Anita Hill an apology about what happened back in 1991, the Clarence Thomas episode. Have you contacted her, number one? And, number two, do you think, this time, it’s different, that we are seeing with the MeToo movement something that is truly going to lead for change, to change for women?

BIDEN: What I feel badly about is the inability to be able to silence the Republican critics on the committee. What people wanted me to do was to gavel down other senators who were harassing her, who were harassing her. And I wish I had had the power or a way to communicate. But you may remember I got in shouting matches with witnesses who were attacking her. I got criticized for shouting at witnesses who were making these statements. So, I — but she deserves credit, because it took enormous courage for her to come forward.

The PBS anchor wasn’t satisfied with that:

WOODRUFF: Have you contacted Anita Hill?

WOODRUFF: Do you plan to?

BIDEN: I hadn’t planned on — I’m always happy to see her. But the — you know, the — there’s — the — I wish I could have protected her from the attacks that came at her, but I didn’t know any way to do that.

A viewer wouldn't have seen this outbreak coming after the soft-shoe opening. First, there were the cancer questions:

-- The book, Promise Me, Dad: A Year of Hope, Hardship, and Purpose. It came out a short time ago. It had to be hard to write, opening up about the loss of your son. Has it been cathartic?

-- You write throughout the book about how he bucked you up and kept you strong…Has losing him changed you?

Then came the please-attack-Trump questions:

-- There is so much in this book. And I want to come back to it. But I also want to ask you what the country is going through right now, because there’s a connection. You have opposed a number of Republican presidents, Richard Nixon, Ronald Reagan, George W. Bush. Is it the same now with President Trump, or is it different?

--  But there are — I ask because there are sometimes comparisons to Richard Nixon, the problems his administration had, the investigations. How do you compare the two?

-- You told me — I interviewed you about a year ago as you were just about to leave office, and you said — and we were — I was asking you about one of the president’s tweets at that point. And you said, he should grow up. It’s been a year. Is he fit to be president?

-- The billionaire businessman Tom Steyer is running nonstop television ads. There are 58 members of the House, representatives, Democrats, who are saying it’s time to start impeachment proceedings. Would that be the right thing now?

Biden said no, because he trusts special counsel Robert Mueller (translation: Impeachment after Mueller is finished and Democrats have majorities in Congress.) She also came back around to Trump  when asking about Iran:

President Trump’s foreign policy, you have alluded to this during the conversation, the tweets, the rhetoric on North Korea. You said yesterday — you have said it again now — it’s dangerous. The former chairman of the Joint Chiefs of Staff, Admiral Mike Mullen, said over the weekend that the United States has never been this close, as close as it is now, to nuclear war. Do you agree with him?

That's how the NewsHour website summarized the 23-minute segment: "In a wide-ranging interview with PBS NewsHour's Judy Woodruff, former Vice President Joe Biden said he believes the U.S. is closer than ever to nuclear war, adding President Trump 'undermines' the office of the president. He also talks about his latest book, Promise Me, Dad, which chronicles his son Beau's brain cancer diagnosis and death, and his own decision not to run for president in 2016."

Woodruff did throw a question from the Republican position, suggesting Obama-Biden went soft on Iran during the last outbreak of protests: 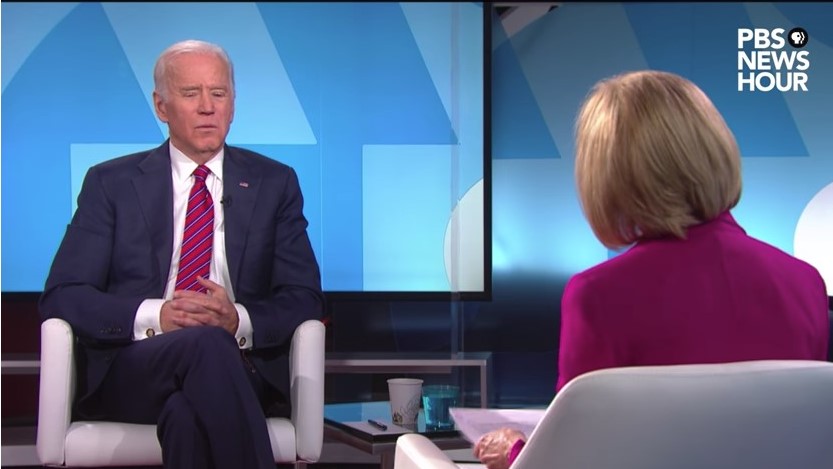 Iran, the president very critical of the regime there, saying they’re corrupt, this week, when we’re seeing these nationwide demonstrations in Iran. The president is saying the money that President Obama turned over to the Iran government at the time of the nuclear deal, 2015, is money that’s gone to terrorism, the terrorist activities on the part of Iran, not to the Iranian people. Today, Vice President Pence is writing that the Obama-Biden administration didn’t step up and support the protesters during the Green Revolution. Was that a mistake?

Biden bizarrely replied “No, we did support the protesters during the Green Revolution.”

Woodruff also challenged Biden to respond to how the economy is performing under Trump:  "When it comes to policy, Democrats criticize this president. They say it’s terrible economic policy. But look at the financial markets right now, booming, going through the roof, setting records almost every day. You now have CEOs saying, we’re going to grow, we’re going to raise wages. And they are saying, we’re so glad not to have new regulations added on, the way they were during the Obama-Biden administration. Did your administration go too far?"

Biden said: “No, not at all. We tried to clean the air. We tried — we said, coal is bad. The sulfur coming out of the smokestacks ruins people’s lungs.”