Hollywood's decision to appoint Anita Hill to lead a commision to fight sexual harassment sounds like a bad joke because she was very publicly willing to dismiss the accusers of Bill Clinton. If you are a true fighter against any and all sexual harassment, why would one refuse to acknowledge the women accusing Clinton as experiencing sexual harassment?

What they suffered wasn’t sexual harassment at all, Hill bizarrely claimed on Meet the Press in 1998:

TIM RUSSERT: When you made your accusations about Clarence Thomas--verbal abuse, in effect--many said, well, because of that alone, he was unqualified to sit on the Supreme Court. This is physical abuse alleged against the president. Would that disqualify him to be president?

ANITA HILL: Well, first of all, the office of the president is an elected office, and the people have to decide whether or not they want to elect a president. I think they've already made that decision. They made it twice. There were rumors of these allegations or this type of behavior out there before, and the people in 1996 elected him after the Paula Jones incident, so I think the people have already spoken. [This is pure James Carville/Hillary Clinton spin.]

The situation in 1991 was very different. We had a person who was nominated for an office and it wasn't the presidency, it wasn't a termed position, it was a position that is a lifetime position. So it's a little different in the situation where you have someone who is going to be sitting on the Supreme Court making judgments about the very kinds of cases that we are confronted with in the realm of sexual harassment. So I think to say, "Well, this situation involved physical and Clarence Thomas' only involved verbal," is really inappropriate and misleading, really.

RUSSERT: Let me show you something that Gloria Steinem wrote in today's New York Times and show it on our screen for our viewers. She said, "The truth is that even if the allegations are true, the president is not guilty of sexual harassment. He's accused of having made a gross, dumb and reckless pass at a supporter during a low point in her life. She pushed him away, she said, and it never happened again. In other words, President Clinton took no for an answer."

HILL: Well, I think that one of the things we have to understand is that the sexual harassment law covers discrimination. It is about preventing sex discrimination in the workplace. In this incident, we don't have Miss Willey claiming that this behavior was severe and ongoing or pervasive enough that it became a condition of her employment. She's not making that claim at all, and, in fact, no one has, in fact, made that claim. She says in the deposition, I believe, that she was not given any particular favor at the White House because of this incident, nor could she say that she suffered any disadvantage because of this incident. So I think, in fact, we aren't talking about sexual harassment, at least based on the facts that we have in front of us, even if we assume that what she said in her interview and the depositions are true.

She also poured a bucket of disdain on the Paula Jones lawsuit: “Certainly, the allegations, even if we assume that they are true, show a level of misconduct, but the allegations about some kind of poor or bad effect on her employment don't seem to really meet the standard for a sexual harassment claim under Title 7, and I think they're going to be even harder to prove under the statute that she's brought the claim under. So, no, you know, if you just look at what's out there so far, I have a hard time finding any adverse ramifications for her in terms of her employment, based on the alleged incident in the hotel room.”

This is the advocate Hollywood is hiring as the Voice of Feminist Integrity? Hill not only said this on TV. She wrote in the newspaper. In an op-ed for the March 19, 1998 New York Times, Hill complained that Clinton's attempt to create an important national discussion on racial discrimination was being sidetracked for sex:

But in our new national conversation on sex, including our discussions of the Paula Jones lawsuit and the resulting revelations from Monica Lewinsky and Kathleen Willey, the references to sexual harassment have expanded far beyond the legal prescriptions. The term has become cliche, and the perception of sexual harassment as a civil rights violation is now diminished….

Ambiguous and inaccurate use of the term sexual harassment may make for interesting conversation, but it threatens to dull the concept's effectiveness as a weapon against sexism in the workplace. Bringing a genuine sexual harassment claim was difficult enough before the current charges made headlines, but if public confusion turns to skepticism, bringing a claim could prove to be even harder in the future.

She wrote again for the New York Times on September 28, 1998, and this article was even more disingenuous. She made the point that Monica Lewinsky's consensual affair with Clinton was not the same as sexual harassment claims against Thomas or Sen. Bob Packwood. She made zero mention of Jones or Willey, as if those were worth forgetting. Instead, the played the classic Democratic card that Republicans are hypocrites on sex every bit as much as Democrats: 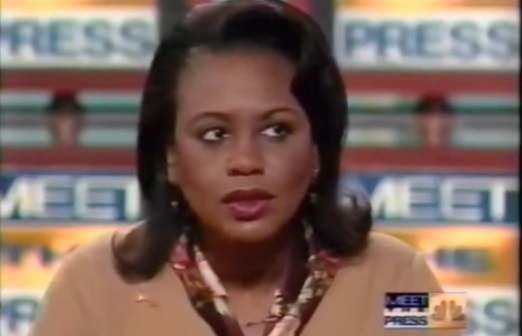 The possible violation of a woman's civil rights is not the same as the emotional pain and loss of trust that result from extramarital affairs. Equating the two promotes a form of moral fundamentalism that devalues women and the issues they face and offers only a formulaic approach to addressing them.

In addition, many of Mr. Clinton's critics claim that his supporters -- especially women -- are guilty of political hypocrisy. On the surface, the Clinton scandal may suggest hypocrisy on the part of his supporters, but the same can be said of his detractors as well.

She attacked Robert Bork appearing on CNN's Larry King Live: "Bork gave a sincere, but altogether tortured explanation of why the perjury and obstruction of justice charges represent a worse subversion of democracy than the charges raised in the Iran-contra affair in the Reagan Administration."

Hollywood has spent 25 years promoting feminism on screen while it shreds it off-screen. Naming Anita Hill to somehow manage its public-relations problem -- liberal Democrats coming to the rescue of other liberal Democrats -- looks desperate and preposterous.