The sexual-harassment allegations inside public radio continue to reverberate. On Wednesday, Minnesota Public Radio announced they would “cut all business ties” with snobbish liberal public-radio legend Garrison Keillor – a year after he retired from his show A Prairie Home Companion – as they investigate a report of "inappropriate behavior" by Keillor involving someone who worked with him on his show. The popular show debuted in 1974, and went national in 1980. 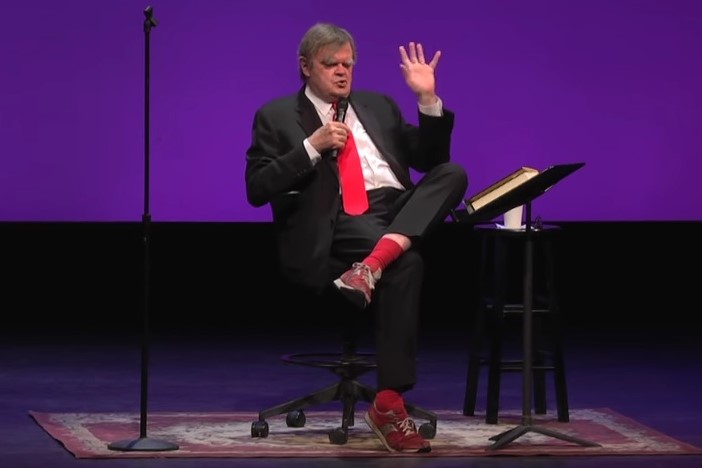 In a statement of protest to the Minneapolis Star Tribune, Keillor wrote: "I put my hand on a woman's bare back. I meant to pat her back after she told me about her unhappiness and her shirt was open and my hand went up it about six inches. She recoiled. I apologized. I sent her an email of apology later and she replied that she had forgiven me and not to think about it. We were friends. We continued to be friendly right up until her lawyer called."

MPR's statement included that quote, but left out this one from the same story: “If I had a dollar for every woman who asked to take a selfie with me and who slipped an arm around me and let it drift down below the beltline, I’d have at least a hundred dollars. So this is poetic irony of a high order. But I’m just fine. I had a good long run and am grateful for it and for everything else.”

In its statement, MPR said it became aware of allegations last month:

Last month, MPR was notified of the allegations which relate to Mr. Keillor's conduct while he was responsible for the production of A Prairie Home Companion (APHC). MPR President Jon McTaggart immediately informed the MPR Board Chair, and a special Board committee was appointed to provide oversight and ongoing counsel.

In addition, MPR retained an outside law firm to conduct an independent investigation of the allegations.

When MPR says it will "cut all business ties," that's several items:

C-SPAN’s Howard Mortman tweeted a highlight from an April 7, 1994 speech Keillor gave at the National Press Club, shortly after Paula Jones first accused Bill Clinton. "A world in which there is no sexual harassment at all is a world in which there will not be any flirtation."

He did USO tours overseas when he was in the comedy biz. He did it from deep in his heart, out of patriotism, and the show he did was broad comedy of a sort that goes back to the Middle Ages. Shakespeare used those jokes now and then, and so did Bob Hope and Joey Heatherton when they entertained the troops. If you thought that Al stood outdoors at bases in Iraq and Afghanistan and told stories about small-town life in the Midwest, you were wrong. On the flight home, in a spirit of low comedy, Al ogled Miss Tweeden and pretended to grab her and a picture was taken. Eleven years later, a talk show host in LA, she goes public, and there is talk of resignation. This is pure absurdity, and the atrocity it leads to is a code of public deadliness. No kidding.

Just before that, Keillor wrote about Trump:

The greatest absurdity of our time is You Know Whom, which goes without saying but I will anyway. What his election showed is that a considerable number of people, in order to demonstrate their frustration with the world as it is, are willing to drive their car, with their children in the back seat, over a cliff, smash the radiator, bust an axle and walk away feeling good about themselves.

Keillor has been an obnoxious critic of conservatives over the years. On his radio show in 2011, he mocked Newt Gingrich in a modified Christmas carol: "Don’t think a sense of style conceals your escapades / Don’t vote to impeach Bill Clinton while shacking up with Congressional aides." Keillor, like Gingrich, has married three times.

Back when Gingrich and Co. took power in 1995, Keillor wrote in Time magazine that Bill Clinton would look very "charming and graceful" next to the GOP: "The Republicans are going to be the Party That Canceled the Clean Air Act and Took Hot Lunches from Children, the Orphanage Party of Large White Men Who Feel Uneasy Around Gals."

Keillor thought of himself as a Large White Man Who's Easy Around the Gals.