WashPost: Moore and Trump Ruin Christians, But 'Women Are Better Off with Franken'

The Washington Post Outlook opinion section on Sunday really demonstrates that this newspaper is deeply invested in Democratic Party spin. Take a look at these article headlines on B-3:

The credit lines explain that Balmer wrote a book hailing Jimmy Carter called Redeemer. Wallis edits the magazine Sojourners, which should be defined as a journal of the Jesse Jackson religious hard left. 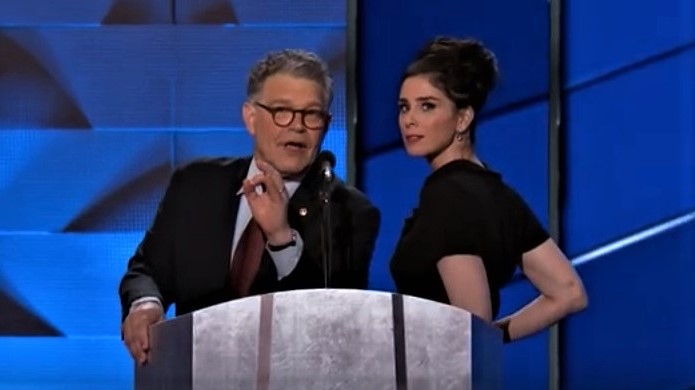 Then turn the page to B-4, and check this out:

Here's the credit line on this one: "Katie Harding is a co-editor of Nasty Women: Feminism, Resistance, and the Revolution in Trump's America and a co-host of the podcast Feminasty."

Harding preached situational ethics: Yes, feminists should be outraged at Franken, but if the Democrats force him to resign, then they've set a precedent for the next Democrat exposed this way, maybe one with a Republican governor: "we're going to drain the swamp of people who, however flawed, still regularly vote to protect women's rights and freedoms."

This is exactly the rationale for why Alabama Republicans are resisting what the Post has wrought with Roy Moore. He's still going to vote the right way, so everything else is apparently scrapped.

Outlook section editor Adam Kushner is a veteran of The New Republic, so you'll notice there's no article on the creeping TNR editor Leon Wieseltier was doing while he was there. (At least Post blogger Erik Wemple called it a "sexist hellhole.")

To get a taste of the other articles, Balmer's piece concludes: "The image that Moore has tried to project over the course of his career -- as a constitutional authority, a Baptist, and a representative fo evangelical values -- is false, even fraudulent. The voters of Alabama have the opportunity to unmask him as the imposter he is." By voting for the pro-LGBT, pro-abortion-on-demand Democrat. That's true Christianity to Balmer and his Sunday school-teaching Baptist hero Jimmy Carter.

This is the Wallis thesis: "President Trump is an ultimate and consummate worshipper of money, sex, and power. American Christians have not really reckoned with the climate he has created in our country and the spiritual obligation we have to repair it. As a result, the soul of our nation and the integrity of the Christian faith is at risk." Replace "President Clinton" in this sentence, and you have a sentence Wallis wouldn't write, and the Post wouldn't want to publish in a month of Sundays.

On the top of B-6 is another leftist critic of the Christian right. The headline is "The family agenda behind Washington's newest museum," the Museum of the Bible. The reviewer is Sarah Posner, an "investigative journalist" for socialist blogs and magazines.

She begins by noting the evangelist Paula White presented Trump with a page of an original 1611 King James Bible: "It was a potent symbol of evangelical leaders' ignoble bargain with a biblically illiterate sociopath, who, despite daily exhibitions of all manner of indecency, has been molded into their greatest champion in the culture wars." Sociopath? Yeah, Posner's playing amateur psychoanalyst.

On the top of B-7 is "Tracing the human evolution of the divine," hailing the latest "compelling" book on God by Reza Aslan, the CNN host fired for tweeting Donald Trump was a "piece of s--t." That's a little harsher than "sociopath."