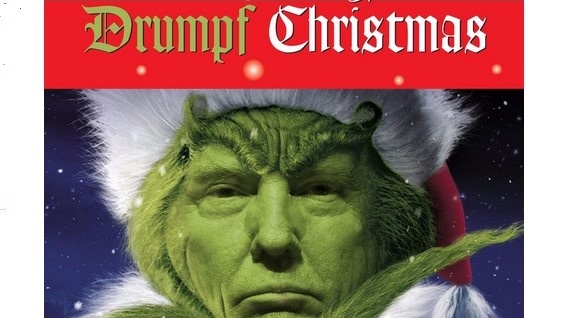 MSNBC Morning Joe host Joe Scarborough is doing a Trump-trashing Christmas album -- or EP, meaning "not enough songs for a real album." It's called A Very Drumpf Christmas, with cover art making Donald Trump into the Grinch. (How Newsweek magazine on Gingrich, 1994.)

The EP includes three songs, complete with sleigh-bell jingles, lyrics about reindeer, and a track titled "The Drumpf," a jazzy, ballad-tempo cut seemingly indebted to "You're a Mean One, Mr. Grinch."

"Oh you can save our Christmas from going kerplumf, from that orange creep that children call the Drumpf?" the band sings on "The Drumpf," which also references former White House communications director Anthony Scaramucci.

What a gag-me gift. What a War on Christmas Music. Do we think the world needed a parody album titled Bitterly Clinging to Christmas with Barack Obama?  The Onion’s A.V. Club website offered their own liberal suggestions:

There’s always “Trumpin’ Around The Christmas Trump,” after all, or “The Little Drummer Trump.” Or that old Christmas standard, “Steve Bannon, The Red-Nosed White Supremacist.” (Now that we think about it, where’s good old Mark Russell with a Trump-themed PBS Christmas special when you really need him, huh?)

There's a sure sign of an over-50 liberal: missing that piano-pounding wit Mark Russell???

Earlier this year, Scarborough released his first EP, Mystified, complete with what TheBlaze called an "incredibly cringeworthy anti-Trump music video." We're mystified that anyone would buy this.