Chuck Todd Gets Off Easy on Hosting Parties for Democrats

On November 7, the NPR talk show 1A interviewed Meet the Press host Chuck Todd and his executive producer, John Reiss to mark the 70th anniversary of the NBC News program. The most notable part of the interview came when Todd was asked about the audience getting the impression that politicians and the media get "super incestuous" in going from government into the press corps, and from the press into government, and politicians and the media going to all the same parties. Host Joshua Johnson asked Todd "How do you keep yourself an honest broker?"

Todd claimed "I'm interested in rebuilding the wall a little bit." That's an interesting answer from someone who actually hosted a dinner party at his home in September 2015 for Clinton communications director Jennifer Palmieri and her husband Jim Lyons. (An invitation was found in John Podesta's emails hacked by WikiLeaks.) But Johnson didn't bring any specific questions about Todd's personal political interactions to the table. 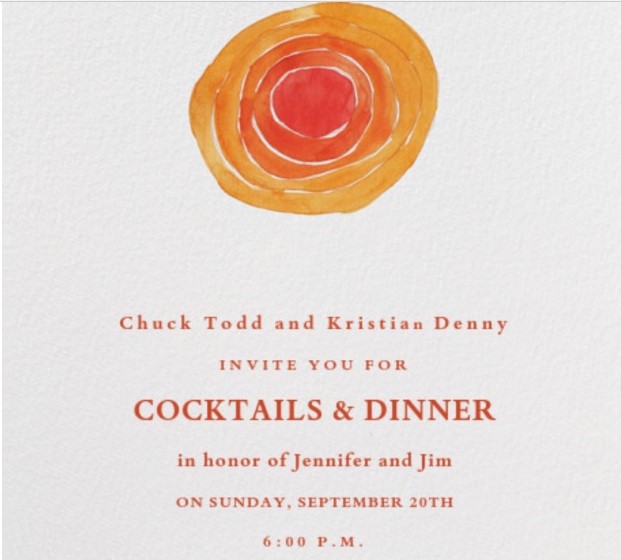 CHUCK TODD: I do worry about that perception. I always say the original sin happened back in the late Sixties, okay? The original sin was that our industry, the industry of television at one point decided – you know, maybe Pat Buchanan and Bill Moyers. One worked for Nixon, one worked for LBJ. Maybe we should hire them, and make them into analysts and journalists. That is when the door opened, right? And I do think, there is a – I understand why some of the public sit there wait a minute, they used to work in government, now they work in journalism, whatever it is, that back and forth. I understand that line got blurred over time. I’ll tell you this. I’m interested in rebuilding the wall a little bit.

I’ve never been a big socializer in D.C., so I don’t do that. I actually think that can sometimes contribute to the chumminess and the clubbiness of everything. I think the best piece of advice that I always give to young journalists, I say actually came from a guy named Lester Bangs, a character in Almost Famous. When Philip Seymour Hoffman, who of course is no longer with us, says to the young reporters, he’s about to go off on this tour, he says “don’t make friends with the rock stars.” And I think that's a piece of advice I think about all the time. These elected officials, these party operatives, they’re not your friends. At the end of the day, they will throw you under the bus to get elected. So just do your job, cover them. Be courteous – there’s nothing wrong with being courteous, there’s nothing wrong with having professional relationships with these folks. And there’s nothing wrong with over time making friends with people. But know that there is a line. And stick to it.

As he speaks, you can almost hear Todd backing away from his answer -- don't make friends, but gee, well, there's nothing wrong with making friends over the years, like Jennifer Palmieri, and hosting a dinner to "honor" them. NPR also failed to ask Todd a specific question that might anger him very much -- that his wife Kristian Denny Todd has a direct-mail fundraising firm called Maverick Mail & Strategies  that's taken major dollars from guests on his show. As I reported, Maverick had an almost two-million-dollar contract with the Bernie Sanders presidential campaign in 2016. No one at NBC built a wall on that. Todd didn't disclose it when he interviewed Sanders.

Mrs. Todd contributed $2,500 to Sen. Tim Kaine in 2012, and she briefly managed the presidential campaign of former Sen. Jim Webb (D-Virginia) in 2015. It's quite possible that Todd would argue that the Palmieri dinner wasn't as chummy, since these women worked for competing Democratic presidential campaigns. But Webb's campaign was more significant as a cash cow than as a political phenomenon.

From there, it grew more ridiculous, when Reiss insisted on a national radio show that his producers have strong opinions, but objectivity is demanded. "You’re allowed to have strong opinions, but we leave them at the door. We’re not here on Sunday or during the week to advocate a position." As if NBC and MSNBC always treats Donald Trump in a very un-opinionated manner.