The Washington Post was a day late in whining about the lack of gun-control advocacy (or as they put it, “courage”) at the Country Music Association awards. Music writer Chris Richards wrote a “Critic’s Notebook” commentary headlined “A monolithic silence from top artists at CMA Awards.” Online, the headline was “Country music is becoming the soundtrack of a nonexistent, apolitical no-place.”

Richards simply ignored the anti-Trump jokes – even if those could be painted as good-natured ribbing, it’s not “apolitical.” Richards complained about co-host Brad Paisley’s song about tuning out the news: “Turn on the news, you’d think the world ain’t got a prayer,” the song went. “But if you turn it off and look around, it’s just another day in Heaven South.” 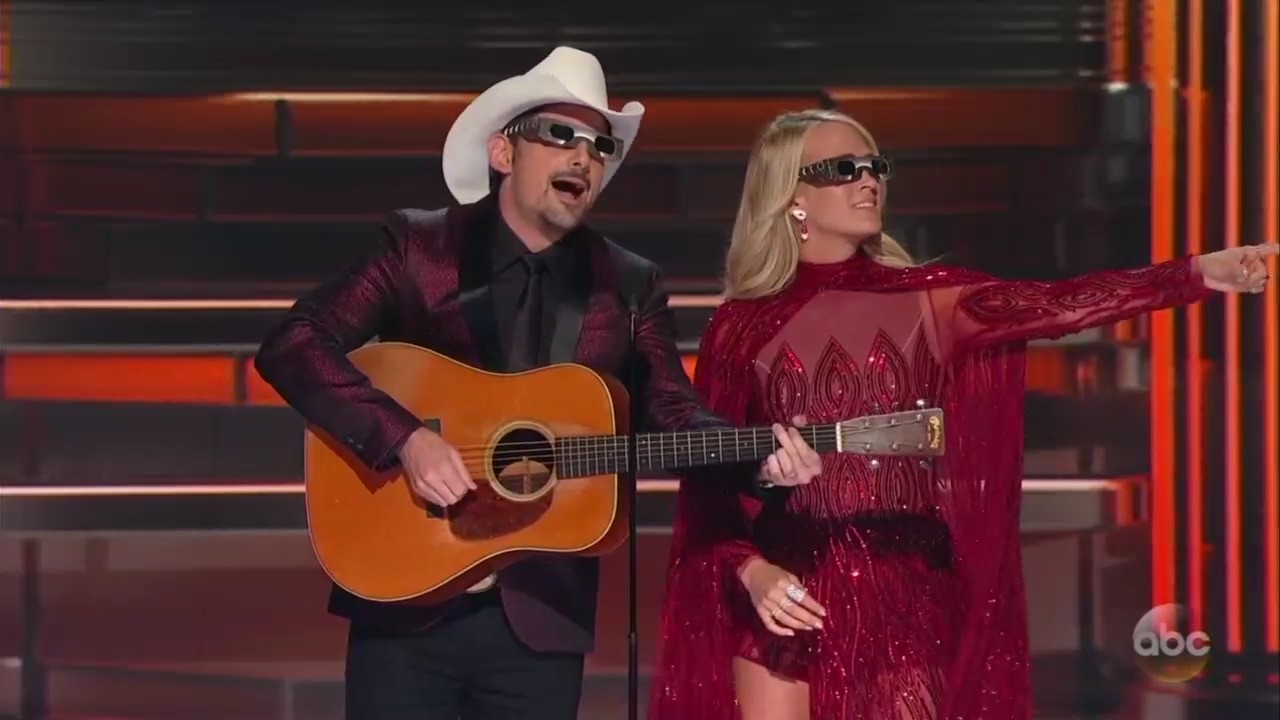 So all of our planet’s problems will go away if we stop paying attention to them? I guess that’s one way to escape reality, but it was still disheartening to see Paisley, the CMA telecast’s co-host for the 10th consecutive year, acquiescing to Nashville’s disengagement reflex and encouraging listeners to “turn it off.” Especially at this year’s CMAs, where not one artist found the courage to say a single word about gun control after 58 fans were shot dead at a country music festival in Las Vegas last month.

And sure, nobody expected the CMAs to transform into a three-hour town hall discussion about the Second Amendment. But did anyone expect such monolithic quiet after such a catastrophic event? Apparently, the ghost of the Dixie Chicks’ career still haunts this town in terrifying ways. (In case you forgot, the colossally popular country trio spoke out against President George W. Bush at a concert in 2003 and were instantly boycotted by radio stations across the country, sending the entirety of mainstream country into a state of political paralysis that has lasted 14 years and counting.)

As for the night’s performances, many of them felt intentionally ordinary, save for Keith Urban singing “Female,” a new solidarity anthem intended as a response to the sexual assault and harassment scandals detonating across Hollywood. He wasn’t taking a risky position here, and the song’s lyrics aren’t the greatest, but the sentiment was welcome. Then again, we were watching a man sing about feminism at an awards show where there were no female nominees for the top prize.

This is how the liberal media operate: They expect TV awards show to produce liberal propaganda moments, and when they aren’t created, they get grumpy at the lack of “progress.” About a month ago, Richards agitated for what did not happen. He dreamed about top country stars locking arms against the National Rifle Association, like a grand collection of Dixie Chicks:

What if country singers — those empathetic keepers of human truth — finally admitted that the line that separates our politics from our everyday lives does not, in fact, exist?

What if, instead of partnering with the NRA, country artists assembled to speak out against it? What if Kelsea Ballerini, Luke Bryan, Charles Kelley, Maren Morris, Jake Owen, Brad Paisley, Carrie Underwood, Keith Urban and every other country star who expressed their sorrow and sickness over these lost lives decided to link arms? What if they chose to speak out against an organization that relentlessly campaigns to maintain the public’s access to deadly firepower?

These singers know how to soften hearts. Together, they could open minds. The radio couldn’t boycott them all.

Keith's song "Courtesy of the Red, White and Blue" struck a hugely positive chord with country fans but received a parade of boos from the cultural elite. It was just too unsophisticated in its message: "You'll be sorry you messed with the U.S. of A./Cause we'll put a boot in your a--/ It's the American way." The Washington Post huffed that Keith loved numbers that "tread the line between rascally and mean," and his "meanest" song was "Courtesy," which "unabashedly glorifies the bombing of Afghanistan" and "traffics in vivid, simple shades of black and white, good and evil."

Oh, rot. Responding to this kind of complaint should be wholly unnecessary. Is the Post trying to argue that the September 11 attacks don't rest in most Americans' minds as "vivid, simple shades of black and white, good and evil"? If Toby Keith is "mean" to our mortal enemies, is that somehow bad? What next? Should we debate the moral nuances of Pearl Harbor? Would they like us to contemplate the philosophical complexities of the Oklahoma City bombing?

In fact, the media at that time celebrated radical country singer Steve Earle celebrating "American Taliban" John Walker Lindh. They were more welcoming to traitors than to "rascally and mean" patriots.