Chuck Ross and Peter Hasson at The Daily Caller report that there may be an obvious reason why CNN correspondent Evan Perez was so quick to report on the Russian dossier story developed by the controversial opposition-research firm Fusion GPS, which was funded by the Clinton campaign and the DNC to dig up dirt on Donald Trump with a former British spy with Russian contacts. It was a matter of working closely with former colleagues at The Wall Street Journal:

CNN’s reporting on the dossier, led by justice correspondent Evan Perez, has been favorable to the firm, Fusion GPS, and hyped the dossier’s credibility. Left out of Perez’s reporting, which has relied largely on unnamed sources, is his personal closeness to Fusion GPS’ operatives…

Glenn Simpson, the Fusion co-founder most often associated with the dossier, is used to working on stories with Perez. As reporters at The Wall Street Journal, Perez and Simpson regularly co-authored stories on national security.

Another Fusion founder, Tom Catan, worked as a reporter for the Journal at the same time as Perez and Simpson. The third Fusion co-founder, Peter Fritsch, worked above Perez and Simpson as the senior national security editor.

Simpson and Fritsch left the WSJ in 2011 to launch Fusion. Perez jumped from the paper to CNN in 2013. Another longtime Journal reporter, Neil King, left the paper to join Fusion in December 2016.

But Ross and Hasson underlined how their collegial relationship never ended. They used Facebook postings to show Perez socializing with his Fusion pals.

Photos posted to Facebook underscore the personal closeness between Perez and the Fusion GPS operatives. One photo posted by Perez shows King, who left the Journal for Fusion in December 2016, and another man posing for a picture at The Bullpen, an outdoor bar right outside of the Washington Nationals’ stadium. 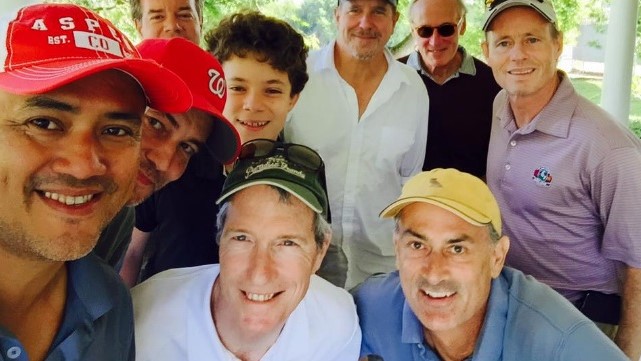 In 2011, the same year that Fritsch co-founded Fusion, Perez posted two photos on Facebook from an apparent fishing trip with Fritsch….At no point in Perez’s reporting did he disclose his close ties to the Fusion GPS operatives.

The Wall Street Journal’s editorial board sounded the alarm about its former reporters in a remarkable editorial earlier this month, accusing Beltway media of being complicit in a coverup with Fusion. “Americans don’t need a Justice Department coverup abetted by Glenn Simpson’s media buddies,” the editors wrote in a scathing takedown of the firm.

Simpson’s wife, Mary Jacoby, bragged about his role in the dossier in a lengthy June 2017 Facebook post reviewed by The Daily Caller.

Jacoby claimed that “some people still don’t realize what Glenn’s role was in exposing Putin’s control of Donald Trump,” referencing the dossier’s thesis. The dossier claimed that Russians had evidence of damaging information on Trump that they would use to blackmail him, an explosive accusation for which there remains no public evidence.

Days before the election, Perez bad-mouthed the FBI for having mostly "innuendo" in investigating the Clinton allegations of  Russian influence that just jumped back into the news:

It turns out that a lot of what they had, Carol, was based on this book called Clinton Cash. It was published by Peter Schweizer, and he's now an editor at Breitbart. But a lot of the allegations in there have not been substantiated. The FBI headquarters here in Washington and Justice Department prosecutors thought that the agents needed to do a lot more work. So, what you have is a lot of misunderstanding and a lot of innuendo as to what exactly was going on.