Parents have realized that the Disney Channel brand isn’t about traditional family programming…it’s about Hollywood using every channel to promote “inclusion and respect for humanity,” which is code for forcing LGBT acceptance. Shred the Bible, sin is in. Your “tweens” – and younger -- need to hear the gospel of the gay movement.

Deadline.com reports Disney Channel is introducing its first gay character on a children’s show, Andi Mack, in one of those Very Special Episodes: 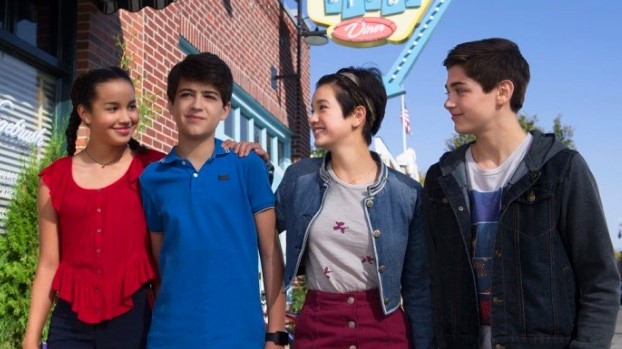 The story arc will mark the channel’s first depiction of a coming-out journey. The character – 13-year-old Cyrus Goodman, played by 15-year-old Joshua Rush – will begin his self-discovery in this Friday’s second season one-hour premiere episode [October 27].

“Andi Mack is a story about ‘tweens’ figuring out who they are,” said Disney Channel in a statement. “(Creator) Terri Minsky, the cast and everyone involved in the show takes great care in ensuring that it’s appropriate for all audiences and sends a powerful message about inclusion and respect for humanity.”

The Walt Disney Co. released a general statement on stories and characters, which reads, in part, “Disney remains committed to continuing to create characters that are accessible and relatable to all children.”

Deadline added that Andi Mack is Disney's "top series of the year among girls (median age is 10) and #1 in its time period among all children ages six-14."

The least surprising element of this story is the involvement of the Gay and Lesbian Alliance Against Defamation (GLAAD), which almost always works hand-in-glove with any Hollywood production to promote homosexuality. “We hear Minsky and Disney Channel, to ensure the story arc is age-appropriate and respectful, consulted with child development experts and was screened to organizations including GLAAD, PFLAG, The National Campaign to Prevent Teen and Unplanned Pregnancy, and Common Sense Media.”

“With more and more young people coming out as LGBTQ, Andi Mack is reflecting the lives and lived experiences of so many LGBTQ youth around the country,” said Sarah Kate Ellis, President and CEO of GLAAD. “Television reflects the real life world and today that includes LGBTQ youth who deserve to see their lives depicted on their favorite shows. Disney has been a leader in LGBTQ inclusion and there are so many young people who will be excited to see Cyrus’ story unfold.”

Jaime M. Grant of PFLAG (Parents and Friends of Lesbians and Gays) also lined up to praise the propaganda: “Sharing one’s innermost self can be challenging, and to do so as an adolescent can be particularly so, especially when in the midst of figuring it out for yourself. Coming out requires honest self-reflection, no small amount of bravery, and a safe place with at least one trusted person – a friend, a parent, a teacher – who can hold your confidence…and your heart. Andi Mack’s creative team captures this moment of revelation with such thought, care, and authenticity; it will be a memory moment for some, and a teachable moment for many.”

Entertainment journalists don’t find any space in their story for any critics of pushing this homosexual revolution in children’s programming, or critics who might suggest that GLAAD-approved plotting won’t allow any “inclusion” of a sincere religious objection to their politically correct party line.