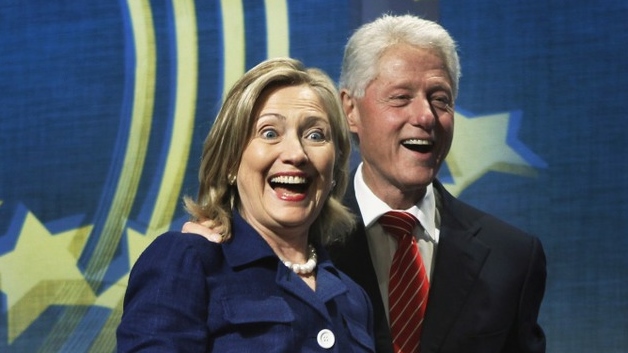 In a shock to no one, the liberal networks funded by taxpayers -- PBS and NPR -- have so far ignored the emerging new stories on the emerging new investigative stories on Russian involvement with the Clintons and the Obama administration. A Nexis search finds nothing there. PBS and NPR have hammered on Russia over the last two days, but only as it deals with the Trump angle.

On Tuesday night's All Things Considered, NPR aired a four-minute interview with Yahoo reporter Michael Isikoff highlighting his finding that Russian social-media trolls were instructed to watch the overwrought TV series House of Cards to familiarize themselves somehow with American politics. He focused on a troll shop in St. Petersburg, and the focus is all on foiling the Clintons, not enabling them:

MICHAEL ISIKOFF: This is the troll farm that was placing thousands of ads on Facebook, spending upwards of $100,000 to influence the American election. That's what Facebook has concluded. So the messaging described by this former troll who went by the name of Maksim is very consistent with what American intelligence officials have said the Russians were doing. The messaging was to denigrate Hillary Clinton, focus on her wealth, on the past scandals of our husband's administration or her private email server to stoke resentment among certain quarters of the American electorate. Maksim describes placing messages aimed at the religious community, talking about gay rights, talking about threats to the Second Amendment. And he says the goal was to turn the American people against their government.

In two stories on Wednesday, NPR focused on what Democrats wanted to ask Attorney General Jeff Sessions in a hearing of the Senate Judiciary Committee. On Morning Edition, Russia was their Exhibit A of juicy news, when it dealt with Team Trump:

STEVE INSKEEP: Okay, so let's talk about what they might talk about if Sessions proves willing to talk about it. What are some of the key issues that they're going to be discussing?

CARRIE JOHNSON: Well, first of all, Russia. Remember at his confirmation hearing, Jeff Sessions went out of his way to deny contacts with Russians during the campaign last year when he was a surrogate for President Trump. It turned out The Washington Post reported Sessions had at least two meetings with Russians during that period last year. Sessions eventually had to supplement his testimony.

There are still some open questions about whether he might have had a third contact with Russians last year. And what is the nature of his communication with Special Counsel Robert Mueller, who's investigating Russian interference in last year's election? The attorney general of the United States could be a witness in a criminal investigation. Think about that, Steve, it's pretty remarkable.

On Wednesday's All Things Considered, the Sessions hearing covered many subjects, but NPR anchor Mary Louise Kelly told listeners "the one that came up again and again was Russia." Reporter Ryan Lucas said Democrats pushed Sessions on the Comey firing, and then again on Sessions meetings with the Russians during the campaign:

RYAN LUCAS: They also pressed Sessions about his previous statements regarding his own contacts with the Russians during the 2016 campaign when he served as a top foreign policy adviser to then-candidate Trump. In one particularly heated exchange, Minnesota Democrat Al Franken recounted what he described as Sessions' shifting statements on his Russia contacts.

AL FRANKEN: First it was, I did not have communications with Russians, which was not true. Then it was, I never met with any Russians to discuss any political campaign, which may or may not be true. Now it's, I did not discuss interference in the campaign, which further narrows your initial blanket denial about meeting with the Russians.

LUCAS: Sessions pushed back. He accused Franken of being unfair and willfully misinterpreting his statements. And the attorney general once again denied any wrongdoing.

JEFF SESSIONS: Well, let me just say this without hesitation - that I conducted no improper discussions with Russians at any time regarding a campaign or any other item facing this country.

HARI SREENIVASAN: Attorney General Jeff Sessions insisted he never lied to the Senate Judiciary Committee about his conversations with the Russian ambassador during the presidential campaign. At a hearing today, he bridled at Democratic Senator Al Franken’s accusation that he’d — quote — “moved the goalposts” on the nature of his discussions.

Sen. AL FRANKEN: First it was, I didn’t have communications with Russians, which wasn’t true. Then it was, I never met with any Russians to discuss any political campaign, which may or may not be true. Now it’s, I didn’t discuss interference in the campaign.

JEFF SESSIONS: Well, let me just say without hesitation, that I conducted no improper discussions with the Russians at any time regarding the campaign or any other item facing this country.

HARI SREENIVASAN:  Sessions has recused himself from the Justice Department’s investigation into Russia’s election meddling.

One can only hope that President Trump's tub-thumping today on Twitter and in front of the cameras might rouse the taxpayer-funded networks into covering more than the preferred Democratic National Committee narrative.