Forgive me for repeating an ancient complaint. But the death of Playboy founder Hugh Hefner reminds us once again that National “Public” Radio emphatically prefers sinners over saints. Twenty years ago, the fiercest obituary on Mother Teresa, the famous nun now honored as a saint by the Catholic Church, came from Scott Simon on NPR. He provided a platform for Christopher Hitchens, an atheist who wrote a book-length attack on Mother Teresa called The Missionary Position, and Simon attacked her “tolerance for tyrants and criminals.”

Fast forward to Morning Edition on Thursday, and there was Scott Simon once again….and he couldn’t locate anyone to denounce Hefner. The soundbites were from Hefner, his daughter Christie, and a fanboy from Esquire magazine. The online headline called Hefner a "Champion of Free Speech and 'Smut'." Like many on the left, there was merely a nod of the head to feminist criticism, a nod to leftist comrades:

SCOTT SIMON: Hugh Hefner's magazine was blamed or credited with setting off a cultural revolution in America. But within a few years, he was a target for the women's revolution, a champion of civil rights who was branded a male chauvinist, proponent of free speech who was decried as a merchant of smut. Playboy published outstanding writers - Joseph Heller, Margaret Atwood and Norman Mailer, and distinctive interviews with acclaimed and controversial figures including Fidel Castro, Miles Davis and Malcolm X.

Instead, Simon replayed a gentle question to the pornographer, insisting critics weren’t Puritans, or perhaps that the objections of religious people weren’t really relevant: 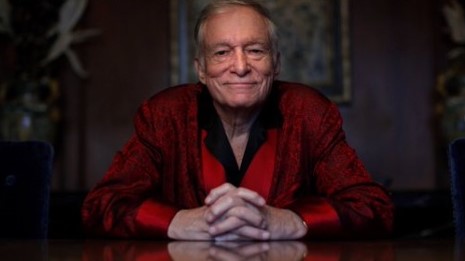 SIMON: Playboy was unbuttoned, all about jazz and booze and swinging. The success of the magazine led Hefner to create Playboy clubs in Chicago in 1960. He hired talented black comics including Dick Gregory and Bill Cosby at a time when most clubs were segregated, and Lenny Bruce, when the comedian was often tried for obscenity. But Hugh Hefner's profile as a hip, liberal activist was cracked by the rise of feminism in the 1970s. Hefner and Playboy were accused of demeaning women as sex objects. In 2003, on Playboy's 50th anniversary, he told us he preferred to pose those criticisms this way.

HUGH HEFNER: I recognize that I remain a - even after half a century - a controversial figure, but America has always had conflicts related to things related to sex. In other words, we remain essentially a very Puritan people.

SIMON: I think there are - a lot of our listeners would say, ‘look, I'm not hung up about sex. I think it's great. I'm not a Puritan. I just think what they do in Playboy makes objects of women.’

HEFNER: Well, I think you ought to talk to the women who've been in the magazine and see how they feel about that. I mean, what is more puritan than somebody who has a strong opinion about somebody else's life and who disapproves of it because somehow or other it's not their particular way?

SIMON: As popular culture changed, Playboy was caught between critics who considered Hefner the emblem of anti-feminism and competitors like Larry Flynt's Hustler, who were explicit to the point of raunchy. Circulation declined. Playboy clubs closed. Hugh Hefner turned control of Playboy over to his daughter, Christie Hefner, in the 1980s. She believes the enterprise her father founded didn't demean women and elevated the struggle for civil rights and free speech.

CHRISTIE HEFNER: So if you want to reduce the magazine to its center three pages then in effect you've objectified the magazine.

Simon also front-loaded the Hefner appreciation with praise for its articles, as hackneyed as that sounds.

MICHAEL HAINEY: And, you know, the joke about Playboy is it's I get it for the articles. But in fact, the journalism in it was profound.

MICHAEL HAINEY: One of the first stories he published, it was rejected from Esquire. It was a fiction piece about heterosexual men in the near future who were persecuted by a gay majority. And, you know, he - he was experimenting with publishing controversial, cutting-edge stuff. You know, the fiction he put in there was - you know, he was always paid top-dollar for fiction, published a lot of authors who never would've found an audience. For 50 years, 60 years, as long as Hugh Hefner was publishing Playboy, you know, when he started off he fought a lot of battles in terms of the First Amendment and free speech. Now, whether we agree with what he was publishing and how he was portraying women, that's all what he was battling about in the courts and for free speech. So, you know, he fought a lot of those battles and he fought them, I think, ahead of his time.

(NPR went even further in evading criticism later in the day on All Things Considered, as anchor Ailsa Chang interviewed Gary Baum, who covers Playboy for The Hollywood Reporter. Chang's questions were incredibly bland, like how is Playboy different now? Baum proclaimed "Well, a lot of the things that Playboy was fighting for have been won. I think that Playboy most specifically won in its attempt to normalize sex. You know, the way that people comport themselves, the availability of sex is much different than when Hugh Hefner launched the magazine. That was part of his goal -- was to de-stigmatize it. Well, it's de-stigmatized. So the burning passion that was at the center of each issue does not fuel each issue anymore.")

But in 1997, Simon wasn't kind at all to the nun who devoted her life to the poor and sick of Bombay:

SIMON: Mr. Hitchens criticized Mother Teresa's enthusiasm for the dignity of poverty as "Middle Age theology," a destructive comfort to keep people poor, rather than give them the means or inspiration to rise up.

HITCHENS: She never opened a modern clinic anywhere. She never used modern methods of medicine. She didn't set out to cure disease or to ease pain -- only to invest it with the odor of sanctity.

Simon allowed Cardinal William Keeler to defend Mother Teresa, but overall, the attack was brutal. Simon added: Simon declared: "It wasn't her support of the Church so much as her tolerance of tyrants and criminals that began to draw criticism in the 1980s. She accepted millions for her missions from the dictatorial Duvalier family in Haiti, and from convicted savings and loan executive Charles Keating in the United States." Notice Simon could celebrate Hefner for publishing interviews promoting "controversial figures" (tyrants) like Fidel Castro.

It's amazing how obituaries can bring out the most dramatic double standards in NPR. It can speak very well of the dead, unless they have offended the Left with the "odor of sanctity."