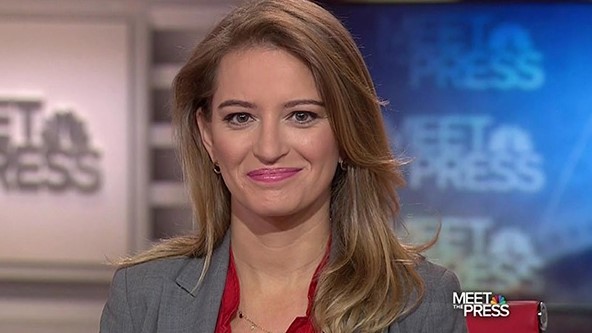 Reading through Katy Tur's memoir of the Trump campaign, titled Unbelievable, suggests something she didn't mean -- it's unbelievable that she thinks she wasn't a tremendously anti-Trump reporter. Her contempt for Trump is all over the pages of her book. His vocabulary is a like burning, derailed freight train wreck. He debates like a "cranky toddler with a hammer." He has "the grace of a falling piano." He walks around in a "halo of crudeness."

Since Tur didn't spend any time with the Clinton campaign or Clinton's backers, this memoir covers just one side, although she considered Hillary a "ballerina" on the debate stage next to Trump's "toddler."

Let's take a look at a few examples of her contempt for Trump:

He [Bush] made it clear that terrorism was a perversion of Islam, that the vast majority of Muslims were peaceful.

Trump is implying something quite different, and stoking fears: Muslims are scary. They're different from you. You're right to be scared. There are terrorists in your neighborhood. Your Muslim neighbors are hiding them. (italics hers)

We're standing a few miles away from where a white kid walked into a black church, Emanuel AME, and killed nine people. But that's not a threat that seems to compute in Trump's world. A group of innocent black people were murdered by a deranged white man. That happened in a whole different political universe.

Trump's Vocabulary Is a Disaster

Some politicians have a gift for language. Trump is not one of those politicians. His sentences call to mind an aerial shot of a burning, derailed freight train. The syntax is mangled. The grammar is gone. "Donald Trump isn't a simpleton, he just talks like one, reads a Politico article from last August. "If you were to market Donald Trump's vocabulary as a toy, it would resemble a small box of Lincoln Logs."

....He is the polar opposite of President Obama. Where Obama's rhetoric soars, Trump's rhetoric slithers. While Obama eats arugula, Trump scarfs Burger King. WhereObama is controlled and calculating, Trump is petulant and loud.

But it works for him....He's the rich guy they would be if they were rich. And he knows it....

I remember watching the first Republican debate where Trump was well, Trump. Back then it was still a shock to the senses. So during the debate, I sent Corey a text asking him about Trump’s performance, which seemed to have the grace of a falling piano.

Trump Overwhelms with Lies and Half-Truths

Last night’s debate still has me grinding my teeth – not because of what happened onstage, although Trump flung enough half-truths and falsehoods to tire even the most diligent watchdog. I’m frustrated by the way the [work] assignments were handed out.

Republicans, Too Shameless to Back Out on Trump Late

As I run through a mental list of questions for Trump, one comes to mind for rank-and-file Republicans: why drop Trump now? Why is this the line for Republicans? Why not calling Mexicans rapists? Or fighting with the pope? Or racism toward a federal judge? Or the fraud lawsuits? Or the name-calling? Or the fearmongering? Or the xenophobia? Or the countless other degrading statements he’s made about women, including his own wife? For god’s sake, why not the half decade of birtherism?

The first debate was a disaster for Trump; he was unprepared and easily flustered. Clinton, who had been practicing for weeks, knew how to get underneath his skin, and she succeeded within minutes...at the time, it felt like watching a ballerina dance around a cranky toddler with a hammer.

But what’s interesting – and troubling to Trump’s many critics – is that Trump is taking what would be an unquestionably historic achievement ad using it against her. He is using her gender against her, seeming to imply that being a girl makes her unfit for the presidency....

His supporters eat this stuff up. In fact, as Trump fights to survive the Access Hollywood tape, I keep thinking of what his supporters have been saying for months – via T-shirts and tchotchkes. The first time I saw a TRUMP THAT BITCH shirt was in New Hampshire. This was a long time ago, before the primaries. I was heading into a Trump event when a vendor’s display caught my eye, and there it was – in multiple colors, multiple sizes. I thought it was a one-off, the work of a freelance misogynist or at best, opportunist. Maybe it was. But it spread. And spread.

The first time I saw a HILLARY SUCKS BUT NOT LIKE MONICA T-shirt was back in April in Albany, New York. Again, a vendor was selling it outside of a rally. He asked me if I wanted one. He didn’t say it snidely. He didn’t even know I was a journalist. No, I told him. I don’t want the shirt. It’s a disgusting shirt. And yet that shirt became a staple, too. The next one was a pin that caught my eye, the KFC HILLARY SPECIAL, emblazoned with the phrase 2 FAT THIGHS, 2 SMALL BREASTS, LEFT WING. Get it?

Lately, those shirts and pins are not even the worst of it. Just a couple of weeks ago in Melbourne, Florida, a man with his wife proudly by his side, showed off his own creation. It was a royal-blue tee with white block letters that read I WISH HILLARY MARRIED OJ. He posed for pictures in front of the press pen. Let me say that again. He posed for pictures in front of the national media in a shirt that unsubtly conveyed that he wished Hillary Clinton had been brutally stabbed to death in the 1990s.

If you had asked me a year ago, I would never had thought that Americans would stoop so low or accept gratuitous name-calling – on either side, against either candidate. [What? Tur avoids any mention of the equally violent imagery sold by Hillary fans, like the shirts touting Hillary holding Trump's severed head and Trump blowing his brains out.]

But now, as Trump sniffs and paces onstage tonight in St. Louis, it suddenly seems easy to see him surviving this scandal – or even getting a bump from it. Trump is crude, and in his halo of crudeness other people get to be crude as well.

Trump Exploits E-mail "Flicker of Misconduct" Like an Arsonist

At tonight’s rally in Tampa, Trump showed none of this weakness. Speaking beneath a handmade sign emblazoned with a thumbs-down drawing and the word MEDIA, he blasted America’s “rigged” system and its “dishonest” press. The ceilings shook with chants of “Lock her up!” but a certain hopelessness and desperation hung on Trump’s every word. He seemed to be putting the bitter in bitter end.

He called Clinton careless and unfit – in large part because as secretary of state, she had set up this private email server. It had centralized her personal and professional emails, which she explained as a matter of convenience. After the New York Times revealed the existence of the server, however, back in 2015, it was clear that Clinton might have skirted the rules and potentially put classified information at risk. [Italics mine.]

From that flicker of misconduct her Republican opponent had started a major political blaze, and Trump has emerged as the arsonist in chief. Back in July, Comey added to the heat at a press conference where he called Clinton and her aides “extremely careless in their handling of very sensitive, highly classified information.”

But at that same press conference he also acted as a fire-stopper for team Clinton, telling America that “no reasonable prosecutor” would bring a case against her. At least that’s where th matter had rested. Trump could keep on railing against Clinton as a criminal and warning America against voting for a person who should have been indicted a long time ago. But he was at risk of sounding like a sore, old crank.

Until last Friday. [When Comey announced he was reopening his email probe.]

This Is The End of the Memoir

The crowd in New Hampshire is frothing as Pence talks about Clinton. He's got a microphone, but in the middle of his speech another message cuts in, a maniac with a buzz saw of a voice, screaming out from the crowd. He's close enough to the press pen for me to hear but far enough from Pence that the God-fearing running mate keeps on talking as if nothing were happening. I don't know if Pence even hears this other man. Probably not. But I do, and I will never unhear him: not the man's message, and not the thousands of other voices that summarized 2016 by not shouting him down.

"Assassinate that bitch," the man said.

And the crowd said nothing.

And the crowd cheered on.