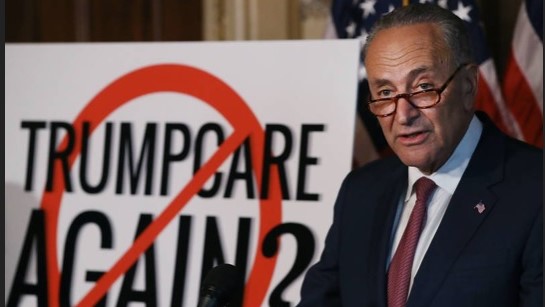 The Daily Beast reports that ABC late-night host Jimmy Kimmel's televised crusade for three nights against a Republican health-care bill was aided by Senate Minority Leader Chuck Schumer. The Democrat's team "provided technical guidance and info about the bill, as well as stats from various think tanks and experts on the effects of [the Graham-Cassidy bill]."

Jimmy wanted to learn more about what was going on politically and policy-wise,” said a source with direct knowledge of the conversations, “[and] he wanted to fight this thing.” ABC is being used for Democrat propaganda, and then wonders: why won't people see us as fair and balanced? Why do people call us "fake news"?

Kimmel's spokesman Lewis Kay confirmed the scoop to CNN's Brian Stelter: "We've heard from and spoken to a lot of people, including Senator Schumer and the many charities and healthcare organizations that oppose this monstrous bill."

Molly McNearney, Kimmel's wife and head writer, clashed with people on Twitter who suggested comedians should stay in their own lane and entertain instead of sermonize: "It would be irresponsible knowing what we know and experiencing what we experienced to 'stay in our lane.' Move over. We're merging."

Kimmel drew heavy media coverage and sympathy in May after speaking about his baby son's congential heart defect, and how everyone should have access to life-saving care, which liberal journalists correctly saw as a pitch for Obamacare.

Sources close to Kimmel said he was prepared to speak out regardless, given [Sen.] Cassidy’s past invocation of “the Jimmy Kimmel test.” Schumer gave him encouragement to do so. The two had been in touch “periodically” over the last several months as prior legislative efforts were considered and their conversations continued when Graham-Cassidy began gaining steam. “It’s part of that continued conversation,” a source said.

Kimmel and his staff also spoke with other activists and organizations opposing Graham-Cassidy in an effort to do his due diligence and “his research,” said one person familiar with the process. People spoke on the condition of anonymity in order to speak freely.

After advising Kimmel on his messaging, the Democrats turned around and used Kimmel in their advertising against the "toxic health-care agenda" of the GOP: "By Thursday, Kimmel was featuring prominently in Democratic political messaging, with the party’s senate campaign arm launching digital ads in a dozen states targeting vulnerable Republican senators by invoking the late-night host’s viral pleas for health care measures that protect those with preexisting conditions."