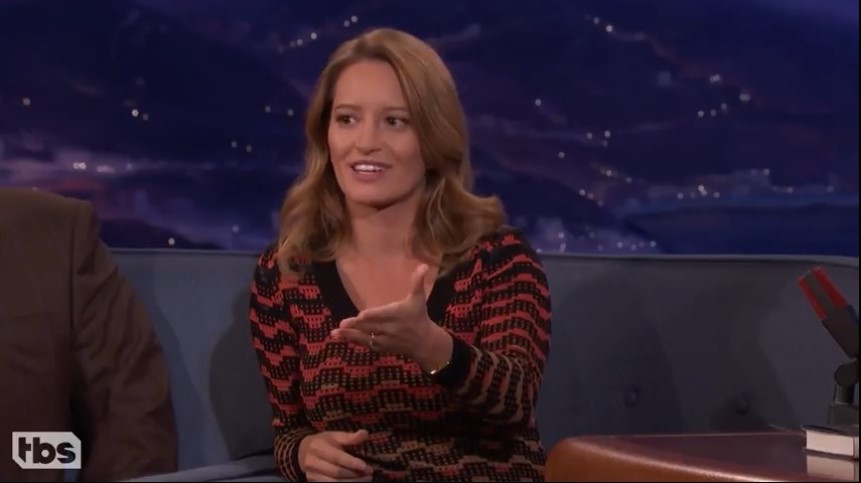 MSNBC host Katy Tur is granting interviews to promote her book Unbelievable on being a political correspondent on the Trump campaign, and that included an hour-long softball session on NPR's Fresh Air with Terry Gross. Tur claimed she doesn't vote because "I don't have a horse in the race." Earth to Miss Tur: When you host a daily program on MSNBC and received adulatory hour-long interviews on NPR, the public can guess which side you're on.

This pose was first notably struck by Leonard Downie when he was the executive editor of The Washington Post. After all, when you're a powerful journalist that can make national politicians duck and cover and weave, it's an easy tactic to forego your tiny vote every four years.

As the interview wrapped up, Gross read a typical liberal wishful-thinking line from the book, that perhaps by the time Tur's book came out, Trump would have already left the White House:

TERRY GROSS: So I want to get back to Donald Trump. Your book ends with these words - "Donald Trump went on to Washington. He may or may not still be there by the time you read these words." I'll add, he's still there. And then you write, there's a pretty good case that he didn't want to go in the first place, didn't like it when it got there and wished for a way back into his old life that didn't involve scandal or shame. Do you often wonder if Donald Trump actually wants to be president now, if he's sorry that he got into this?

KATY TUR: I think that is a reasonable question, absolutely. I mean, this is a guy who has never shown a lot of interest in policy or in civic service. He never ran for office, never held an elected office, was not in the military. He built a big business, but the business is mostly family-run. He's been - very much, his career before this was about self-promotion and self-aggrandizement.

So they - I think it's a valid question that remains open about whether or not he truly wanted to be president. And there's a good argument to be made that he did not want to be president and that he's not having a good time while he's in office. But I think that that is ultimately a question that nobody other than Donald Trump can answer.

GROSS: Do you think you'll ever get to interview him again?

Keep hope alive, but a daytime interview on a network for hard-core Democrats shouldn't be an easy sell.

Then the NPR host turned to the neutrality pose:

GROSS: You don't vote, and - because you want to be neutral. Especially when you're covering a candidate, you don't want that candidate to think that you're for them or against them. You're just covering them. And voting is the right that every citizen should have. It's a private thing. You're in the voting booth. No one knows who you voted for unless you tell them. So given all that, why do you choose not to vote?

TUR: Because I don't want to color my own opinion. I think that if I was voting, I would feel like I had a horse in the race, and I don't have a horse in the race. My job during this campaign season was to tell you what was going on as accurately as I could and without bias, without coloring it with a desire that I might have, internally, for a different outcome. And I feel very strongly about that, personally. I know everyone has their own opinions on this, but I feel very strongly about it. So if I am covering politics or if I'm covering, specifically, a presidential race, I don't think it's appropriate to vote.

This is how easily that pose falls apart. In another book interview on the late-night TBS show Conan, Tur snarkily announced her findings about Donald Trump's mouth, and what comes out of it: "I do talk about his vocubulary looking like an aerial version of a freight-train crash! Just mangled! Nothing makes sense." And she said his smile cuts his face in half, like the Canadians in South Park. Neutrality? Not so much.

PS: After being accused by her own father of being "transphobic" for not wanting to talk about his decision to proclaim he was a woman, Tur mustered some outrage for anyone who would criticize her as ludicrous:

TUR: And my dad made a really brave decision by deciding that he, now she, wanted to live her truth. She wanted to live as a woman. And I think that's an incredible thing. And for the people who want to use that against me, or to try and take me down or insult me over it, I just - I feel badly for them because they're ludicrous people.